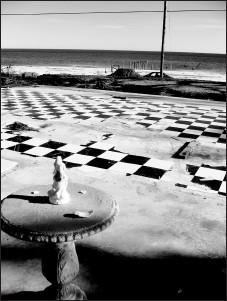 A photo of Waveland, Mississippi, which suffered from Hurrican Katrina (Alison Miller)

On the neat, peaceful campus of Lawrence University, something very messy and chaotic has arrived. It comes in the form of an opportunity.
Hurricane Katrina, the Category 5 storm that devastated the city of New Orleans, was not just a passing phase. This storm created such wreckage in its wake that the 26-year-old Federal Emergency Management Association admitted that it was the biggest natural disaster they had ever dealt with, and they were incapable of handling the disastrous
aftermath. Katrina left 80 percent of New Orleans underwater and put 1.2 million people out on the streets. But that was only right after the hurricane hit. Now, there are even more serious problems. The standing water that remained for two weeks absorbed cleaning supplies inside houses, such as ammonia and bleach. Gasoline, solvents and paint added to the toxicity of the water, as well as chemicals from the oil refineries in the area. Black mold has taken root in wood floors, carpets, walls and books. As a result of this extreme contamination, FEMA and the Department of Homeland Security have declared the city a toxic wasteland. It is unsafe for anyone to even breathe in New Orleans without a facemask or other means of protection. If a person were to go unprotected into a home affected by the storm, within 20 minutes he or she would be coughing from the amount of black mold that they would have breathed into their lungs.
Luckily for the deprived residents of New Orleans, there are people who are helping with the aftereffects of the storm, working in stations that provide aid to those who need it. Lawrence student Alison Miller is one of those people.
Over spring break this year, Miller is hoping to gather together a group of up to 42 students and faculty to spend the week in St. Bernard Parish, just above the 9th Ward. This town was among those hit especially hard, because they were greatly affected by the breach of the Industrial Canal levee. Katrina left around 66,000 people homeless, washing away their houses with a 22-foot storm surge. “The military involvement there is minimal, as is the Red Cross” Miller said. “They are doing all they can with who and what they have, but it’s just not enough.”
Miller says it was her own experiences
in New Orleans last December that sparked her interest in helping out. Miller was in school when a group of students and adults from a company kitchen in Viroqua, Wis. made plans to go south and help feed the hungry residents of New Orleans. When Miller arrived at St. Bernard Parish on Dec. 27, she started working at the Emergency Communities camp that had been set up. The camp provided food, clothing, toys and a safe and clean tent for kids to play in for up to 3,000 people every day. “The facility isn’t exactly equipped to make that much food, so it’s a lot of work,” Miller explained. Meals were provided from 5:30 in the morning until 7 at night, after which the extra food was packed into containers that families could take to go if they were too late for a meal. “The camp provides a great working community.” Miller continued. “The people who work there are there because they want to help, and they know they are needed.”
When asked why people should go on this trip over their spring break, Miller was adamant: “Rebuilding New Orleans has basically been left up to us, the people of this nation. They need more help,” she said. “It’s an amazing experience, because you really realize the value of volunteer work. You can make someone’s life better.”
Miller added that, since Wisconsin is so far from the devastation to the south, local coverage on progress – or the lack thereof – is sparse.
If your spring break plans are unknown thus far, falling through, or you just want to feel good about yourself, consider a trip to New Orleans. It is too easy to believe that other people will help those in need. A lot of extra help is necessary in order to help those who lost their possessions after Hurricane Katrina, some of whom are never sure where they will end up for the night, or where they will find their next meal. Miller’s final words rang loud and clear: “This isn’t a foreign country; this is our country,” she said. “If you want to help the homeless, man, help the homeless.

Anne Aaker A photo of Waveland, Mississippi, which suffered from Hurrican Katrina (Alison Miller) On the neat, peaceful campus of Lawrence University, something very messy and chaotic has arrived. It comes in the form of an opportunity.Hurricane Katrina, the Category 5 storm that devastated the city of New Orleans, was not just a passing phase.…