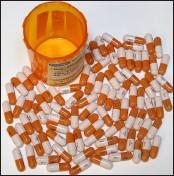 Adderall and Ritalin, two prescription
drugs used to treat Attention Deficit/Hyperactivity Disorder, are becoming more and more appealing to students as study aids. They compete against caffeine as students’ choice stimulant. Many students rely on caffeinated beverages and caffeine pills to get them through late night study sessions and early morning classes, but ADHD drugs are a popular alternative to caffeine because of the way they work on the brain and the desirable effects that result. Some Lawrence students have discovered some success with ADHD prescription medication as a study aid and go to some trouble to attain it, despite prohibition of unsanctioned distribution.
Prescriptions for ADHD drugs are not difficult to find among college students, because medicine is a preferable treatment for students with busy schedules. Some students that do receive prescribed treatment share their drugs to “help out” a friend who needs to cram for a test; some may even sell their medication for a profit. These drugs are available because a notable contingency of college students is being treated for ADHD.
Students may not discover that they have ADHD until they are faced with the rigors of a college education. One Lawrence student only began treatment for his ADHD as a junior in college, but said there was “no doubt” that he had symptoms in high school. Lawrence University’s resident nurse, Carol Saunders, said, “I think students are probably a little more concerned about ADHD and act upon it because they have to deal with an academic schedule.” People who take ADHD prescription drugs do so to improve concentration and impulse control, whether they have the condition or not, and the drugs work for both types of users.
Causes of ADHD are still speculative, but general explanations usually suggest a deficiency in the brain of the neurotransmitter dopamine. Dopamine aids in the functioning of motor skills and is tied to motivation and attention span. Professor Bruce Hetzler, a neuroscientist and chair of Lawrence’s psychology department, explained how ADHD treatments approach this deficiency. Most ADHD medications are stimulants and work to encourage the presence of dopamine
in the brain.
Amphetamines – like Adderall – inhibit the reabsorption of dopamine in the brain. Because dopamine is not reabsorbed, the chemical continues to affect the brain and encourage neural connections tied to movement and attentiveness. Methylphenidate – like Ritalin and Concerta – works by encouraging the release of excess dopamine. These two treatments, amphetamines and methylphenidate, work in different ways to increase levels of dopamine in the brain. These drugs are effective in people with or without a dopamine deficiency, and with or without ADHD.
The effectiveness of Adderall and Ritalin may lead one to question why the drugs are not being used more frequently. There are few differences between how these stimulants work and how cocaine works. According to the Mayo Clinic Web site, these drugs are referred to as psychostimulants, and users are almost assured a rapid heart rate and a suppressed appetite, among other side effects. One Lawrence student says she unconsciously
clenches her jaw and grinds her teeth while on Adderall, only to realize when the drug wears off that her mouth and teeth are sore. Another Lawrence student shared a negative experience with Ritalin: “I have other health problems exacerbated by stress,” she said, “but when I took too much ADD medication, I experienced severe nausea and vomiting.”
While people without ADHD endure the negative effects to help them focus, those with the condition may take the medicine reluctantly. A Lawrence student with diagnosed ADHD said that he would rather do without. “If I didn’t need it, I certainly would not take it,” he said. “Since I can’t function in class without it, I have to take it, and I just have to deal with the negative side effects, which are fairly significant.”
People with ADHD are medicated out of necessity, and it seems that those without ADHD self-medicate out of desperation. Students who do not have ADHD may diagnose themselves with the condition to justify use of the prescription, or simply take it as an antidote for procrastination.
Using psychostimulants as study aids begs another question: Does unsanctioned use of these stimulants give an unfair advantage to students who do not have ADHD and are thus increasing their mental abilities by taking them? This ethical judgment is one that should be made personally, but keep in mind that the current college generation is not the first to use amphetamines on an “as-needed” basis. Before unsanctioned use of amphetamines was made illegal, they were used as performance enhancers in many different contexts. Hetzler said that their use goes back several decades. “[Amphetamines] have been used since the 1930s to treat ADHD, and for that matter, to increase endurance
for truck drivers and students,” he said. “They weren’t illegal for a long time. They were used by soldiers on both sides during World War II to increase stamina and endurance.”
Despite federal regulations, students
at universities throughout the country have access to amphetamines and methylphenidate through inter- and intra-campus exchange networks. Even as the drugs are legally and illegally available, students must weigh the pros and cons of these stimulants.
Caffeine will encourage wakefulness, but when the pressure is on and deadlines approach, it is not surprising that students seek more motivating psychostimulants. Students should not, however, let themselves be blindsided by academic pressure and ignore the repercussions and risks that are involved with taking ADHD medication. When academic stakes are high, students have to decide for themselves: Is it worth it?

Nora Hertel Adderall has become a popular – albeit illegal – study aid at colleges (courtesy of Wikipedia) Adderall and Ritalin, two prescriptiondrugs used to treat Attention Deficit/Hyperactivity Disorder, are becoming more and more appealing to students as study aids. They compete against caffeine as students’ choice stimulant. Many students rely on caffeinated beverages and…