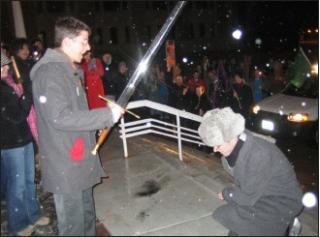 You all know the rules: “You need to be more a machine than man or woman,” “You need to know how to type and how to use a telephone,” and “the weak will not survive.”
As an outsider who never played Trivia, it still does not make much sense to me to spend 50 consecutive hours in front of a computer and on the telephone to answer questions like “Who did the producer of Grateful Dead John Cutler play chess with on a plane on Sept. 16th, 1970?” But I guess it is not really the answers to the questions that matter but rather the whole heck of it. Emre ztek said: “Our teamwork was amazing.
Some called while some were looking for answers; some cooked while some were fighting with sleep deprivation. And even though we didn’t win, it was one of the greatest
times ever!” So that must be it: having a great weekend together, being a team and struggling with sleep deficit.
Kohler Hall was lucky enough to get sponsored by Living Essentials, the makers of Chaser 5-Hour Energy drinks, and they were not only provided with a lot of crazy energy drinks but also a lot of nasty fast food. However, everybody I asked told me that he or she had slept for at least a couple of hours, and that the energy came from the adrenaline
as “every single question was another wave of excitement that hit the group.”
I was actually expecting people to look very exhausted and smell really bad by Sunday, and I was somehow slightly disappointed to see them all in a very good mood, showered and very concentrated.
Walking into the lounges of the residence halls where people were gathered was like being from another world, and I cannot say that people were really talking to me. They made their own little inside jokes and were caught in their own little network world, calling parents and friends and trying to block the telephone lines to prevent
other teams from delivering their answers to the trivia masters.
What made this year’s game different
from the 40 previous Great Midwest Trivia Contests was that it was broadcast exclusively on the Internet, as Lawrence University’s radio station, WLFM, has moved to a webcast-only format. According to this year’s grand master, Reid Stratton, this was a challenge but it worked out perfectly.
As usual, on-campus teams had special challenges to achieve, such as presenting the hippest haircut of their team or choosing two team members that had to play against 2 players of the mens basketball team. For those who are interested: out of 62 teams registered off campus and 11 teams on campus, the team “Bucky’s Banastitudinal Blasphemers” made first place on campus, followed by “Coalition of the Awexome” and “I Hate Patrick Ehler’s Big Dumb Face.” The first place off campus went to “The Holy Brogan Empire,” the second to “What’s the Frequency, Lawrence?” and the third to “Radio-Free Iowans.” But as you all know, the most important rule of the contest is the Trivia Credo: “Trivia is meant to be entertainment and should be perceived solely in that light.”
Altogether there were 324 questions to answer, including the “Super Garruda” at the end: “Spike O’Dell, the WGN radio personality, has a cup museum in Door County, Wis. that features cups signed by celebrities that have been on Spike’s show. What did comedian Tracey Ullman write on her cup?” The answer was:” To Spike, I don’t have Herpes – Love, Tracey Ullman” and no team answered it correctly. One team got hold of Spike O’Dell, who they said was very mean to them. Another reached Ullman’s house, but was informed that she had just left for a party.
At the end of the day, the most important principle in this game was to have fun: The first prize on campus was a painting of a clown with a large “I” spray-painted on it – a souvenir from a publicity stunt pulled by the trivia masters after last week’s convocation. The first prize off-campus was a broom they lit on fire. If that is what you always dreamt of, you should definitely
participate next year, as obviously
Trivia is an experience not to be missed ever! 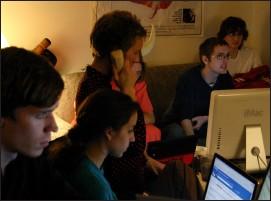 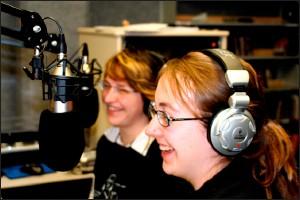 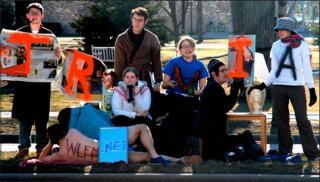 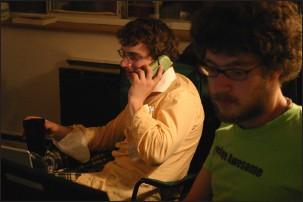 Aline Durr Grand Master Reid Stratton knights James Hall as his successor for Trivia XLII (Lou E Perella) You all know the rules: “You need to be more a machine than man or woman,” “You need to know how to type and how to use a telephone,” and “the weak will not survive.”As an outsider…