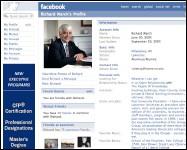 At a recent Student Welfare Committee meeting, Dean of Students Nancy Truesdell brought to light concerns regarding Facebook – the online directory
and social network – and the possible negative impact it could have on students trying to get jobs. The Web site, on which students can post personal profiles and pictures as a way of networking with fellow
college students, has garnered much attention from newspapers and magazines lately, as students seeking jobs have been denied employment because of content on their profile.
The Internet often breeds a false sense of security and – to a certain extent – anonymity.
Because Facebook is designed for college students, it does not occur to most people that anyone with access to a college
e-mail account can view the profiles. “Students are under the impression that [Facebook] is more secure than it really is,” Gayatri Naidu. “Students don’t understand that it’s reality.” It is important to note that if you are going to put something on the Internet, you need to exercise caution, because you do not know who will see it.
For those applying for jobs after graduation this is especially important. Many students have content on their profiles that would be deemed inappropriate to most potential employers, including
photographs of illegal activity
such as underage drinking. Emily Saltzman, the other co-chair of the committee, remarked that employers view this as “evidence that you’re not grown up.” Due to such profile content, students throughout the country are being turned down for jobs. In some cases, employers have explicitly stated that this is due to an applicant’s
Facebook profile. While not every place where students apply will have access to Facebook, if students are applying somewhere school-related or with a high concentration
of Lawrence alumni, the chances of their profile ending up on the wrong computer screen are high. Saltzman and Naidu related Facebook to the advent of voice mail, that when it first came out, students had to be reminded to keep their messages professional, because they did not know who could be calling.
With the popularity of Facebook on the rise, some colleges and universities have set up a sort of “Facebook monitor” to peruse profiles
and look out for illegal activity.
In some cases, actions have been taken against the individuals, with some even being expelled. This idea was tossed around at the committee meeting, but it was decided that the university should not take responsibility for what students put on their profiles.
In addition, students should also be aware of the security
risks that Facebook poses. To be safe, it is not a good idea to include cell phone numbers, home addresses, or other personal information that could possibly allow strangers access. “We want to vocalize to the campus that you need to be aware,” added Saltzman. Students, especially juniors and seniors applying for jobs after college,
may want to reevaluate the content of their Facebook profile, and ask themselves if that is the image they wish to portray to potential employers.

Kayla Wilson (Lou E Perella) At a recent Student Welfare Committee meeting, Dean of Students Nancy Truesdell brought to light concerns regarding Facebook – the online directoryand social network – and the possible negative impact it could have on students trying to get jobs. The Web site, on which students can post personal profiles and…