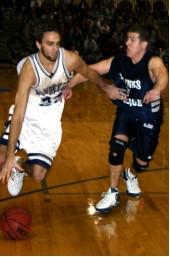 Hosting the Midwest Conference tournament may come down to a coin flip. The Vikes won all three of their games this week, but if a determined Carroll team shows up Wednesday night, both teams have a strong possibility of finishing 15-1.
“The tiebreaker rules to host the tourney are determined by the conference coaches in a preseason vote,” stated Midwest Conference sports information director Matt Troha. “The first tiebreaker is head-to-head record; the next option is a coin flip.”
If LU plays at Carroll like they played this week, Lawrentians should be able to enjoy watching their home team play in Alexander. The Vikings absolutely dismantled their opponents, winning by an average
of 27 points on the three-game homestand. They are now 20-0 and 14-0 in the Midwest Conference. On Monday, they were bumped up to No. 2 in the nation according to the d3hoops.com top 25 poll.
Last week, John Tharp’s team found out that their starting center, Matt Osland, is out indefinitely with mononucleosis. Sophomore Andy Hurley has stepped in wonderfully, recording 12 points and 8 boards against Knox, and 15 and 5 versus Illinois College.
On Tuesday, the day before the Vikes were to take on Beloit, five players – including all-American Chris Braier – missed practice. Coach Tharp was also slowed by an extremely upset stomach.
Four of the five who missed practice were in uniform the next night and contributed meaningful minutes. Braier put up impressive numbers, scoring 14 points, pulling in 9 rebounds, and doling out 7 assists. Braier is the current team leader in scoring,
rebounding, assists and steals.
Senior Kyle MacGillis played a stellar game against Beloit. He poured in 20 points on 8-10 shooting, and had 12 rebounds. He also had 4 steals.
Braier said the team is not concerned with the tiebreaker
rules. “We’re not worried about coin flips,” he said. “We just care about winning.”
MacGillis welcomes the idea of a week off before the Carroll showdown. After the Beloit game, he said, “It’s great that we get a week off. It will be nice to get some rest and relaxation.”
Lawrentians should strongly consider making the two-hour trek down to Waukesha Wednesday night. Lawrence has had difficulty
playing at Carroll in the recent past, losing last year by 4 and narrowly escaping with victories in the two previous
years. A strong showing
by Lawrence students could make a difference in the outcome of the game and determining home court advantage in the MWC tournament.
Game time is set for 7:30 p.m. 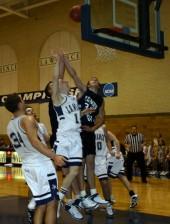 Chris Braier probably still got this board (Erin Ober)

Mouse Braun Senior Ben Klekamp drives for 2 of his 9 points against IC (Erin Ober) Hosting the Midwest Conference tournament may come down to a coin flip. The Vikes won all three of their games this week, but if a determined Carroll team shows up Wednesday night, both teams have a strong possibility of…