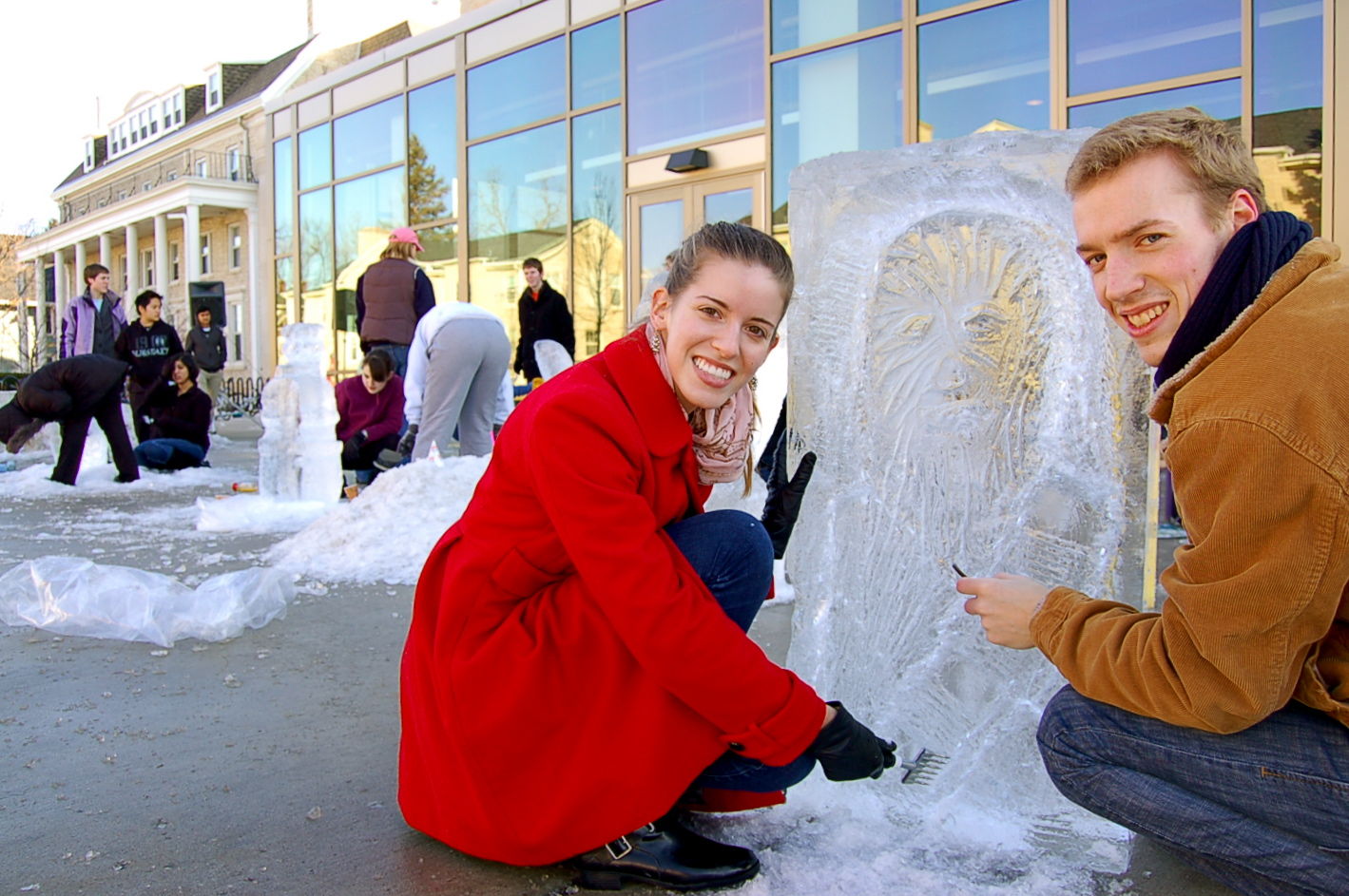 The 2012 Winter Carnival had nearly everything this year: ice sculpting, snow cone making and dancing to big band music at the President’s Ball. But it lacked one fairly important element: cold winter weather.

In all the years of Winter Carnival’s history, dating back to the 1970s, counting on winter weather has never been a problem. While some activities were held inside, most of the carnival events featured snow, ice and cold temperatures.

Erin Dix, the university archivist, explained that the Winter Carnival we know today is a revived version of the 1976 Winter Carnival. The Winter Carnival traditions, including hot chocolate, ice sculpting, broom ball, maple taffy and the President’s Ball were all included and enjoyed by Lawrentians and members of the Appleton community over 30 years ago when the carnival began. Prior to the Winter Carnival, an event called “winter weekend” existed during the 1940’s and 1950’s. During this weekend, students would go to Door County for skiing and skating.

Unfortunately, the unseasonably warm weather caused many of the traditional events to be canceled this year. Curt Lauderdale, assistant dean of students for Campus Life, commented on results of this year’s mild winter. Said Lauderdale, “Some events like skiing, sledding, broom ball and maple taffy-making had to be postponed or cancelled.”

Though Lauderdale admitted that “it was a little weird to be playing lawn games in the beginning of February,” he thinks that “students really enjoyed themselves and we can call it a success.”

Overall, these events and the entire Winter Carnival weekend both helped students meet new friends and bond the Lawrence community as a whole. Said Lauderdale, “We wanted to round out the rest of the weekend with events that were already going on, like the orchestra concert and athletic events. We wanted to take advantage of other great things that were already happening and create an all-campus community moment.”

While Cori Lin ’14 “was disappointed that the taffy-making didn’t happen,” she did enjoy others events that could still happen regardless of the weather, like the President’s Ball.

Called an “Old Fashioned Dance” back during the 1976 carnival, the President’s Ball attracted many students with its big band and DJ music this year. Said Alyssa Villaire ’14, “the band and music were great, and everyone looked so lovely.”

Lin also enjoyed the President’s Ball, especially since she got to dress up and have a good time with her friends. Said Lin, “Even if the weather is dreary, the ball is something that picks you up during the mid-term winter slump.”

Ice sculpting, another event that was held despite the weather, was also considered a successful and enjoyably experience for students. Villaire teamed up with Mathias Reed and Fanny Lau to win the ice sculpture contest with their Chewbacca sculpture, which still can be found standing outside the Warch Campus Center. Said Reed, “Ice sculpting ended up being my favorite event of the Winter Carnival, besides the President’s Ball.”

While many Winter Carnival events could continue without snow and ice, others like sledding and broomball were simply impossible to accomplish. A snowless and green hill behind Memorial Hall forced sledding to be cancelled.

For the broomball tournament, carnival organizers “started to flood the Ormsby ice rink, but then it all melted away,” explained Lauderdale. As a last minute substitution, lawn games like ladder ball and beanbag toss were played on the Quad.

Furthermore, winter carnival was paired with the Career Center’s Lawrence Scholars event, bringing in many alums. Lin hopes that in the future, the traditions of Winter Carnival will be enhanced by more alumni involvement during carnival weekend. She thinks, “It would be really cool to see a lot of alumni come back. This way, old traditions will be remembered and appreciated, while new traditions are created and enjoyed by a wider range of people.”

Regardless of the lukewarm winter weather members of the Lawrence community experienced this year, Winter Carnival provided a weekend filled with opportunities to bring people together and bring back one of Lawrence’s older traditions.

Said Lauderdale, “I hope that Winter Carnival continues to grow and find a permanent home in our winter schedule here at Lawrence.” 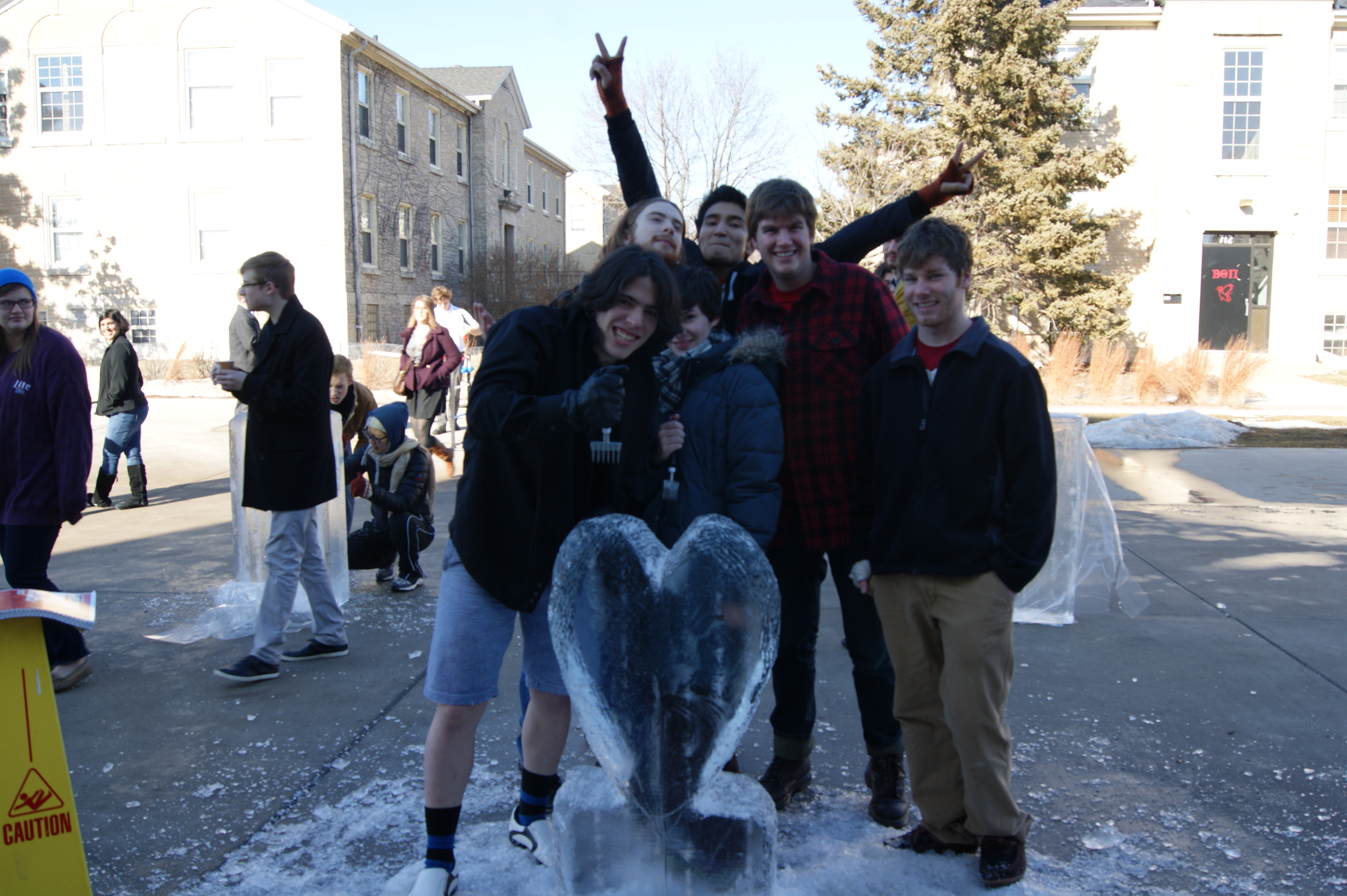 Marie Jeruc (Photo by Fanny Lau) The 2012 Winter Carnival had nearly everything this year: ice sculpting, snow cone making and dancing to big band music at the President’s Ball. But it lacked one fairly important element: cold winter weather. In all the years of Winter Carnival’s history, dating back to the 1970s, counting on…