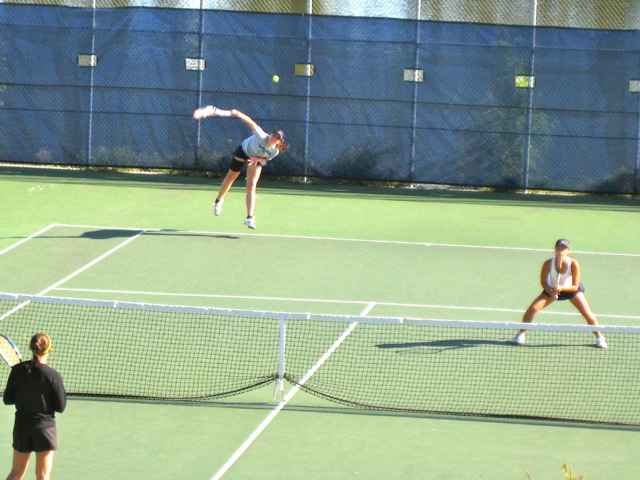 The women’s tennis team defended their undefeated record last week by bringing in two victories against Beloit and UW-Oshkosh.

The Vikings swiftly defeated the UW-Oshkosh Titans 6-3 Wednesday on the Lawrence courts, winning four of six singles matches and two of three doubles matches. Senior captain Beth Larson came up with a big win against Oshkosh’s star player Emily Bostwick 7-6 (8-6) 6-2 at No. 1 singles.

Junior Jennifer Roesch defeated Preslee Nolte at No. 2 singles 6-4, 6-2 and the Larson/Roesch No. 1 doubles team defeated the Bostwick/Piotrowski duo 8-5.

Sophomore Gayatri Malhotra dominated her opponent at No. 3 singles with a victory of 6-4, 6-2, and freshman Christina Schaupp pulled out two wins in both the No. 4 singles competition and the No. 3 doubles competition with her partner, freshman Hannah Geoffrey.

The Vikings kept their winning streak alive Saturday with an 8-1 conference victory over Beloit College. The Vikings swept the singles competition, limiting the Beloit Buccaneers to two games in nearly every set.

Perhaps the two most impressive singles victories of the day came from Larson at No. 1 singles and Schaupp and No. 4 singles, who defeated their opponents 6-0, 6-1 and 6-1, 6-0, respectively. Malhotra dominated No. 3 singles, winning 6-1, 6-1, and Roesch had an impressive 6-1, 6-2 victory at No. 2 singles. The Women’s Tennis team also picked up wins in the No. 1 and No. 3 doubles competitions, in which the Larson/Roesch duo defeated Beloit’s Yates/Taylor team 9-7, and freshmen duet Schaupp and Geoffrey defeated Beloit’s Beck and Miglin 8-5.

With their current record of 8-0 (4-0 in conference play), the women’s tennis team is the most dominating athletic force on the Lawrence campus. When asked what has contributed to the success of the team this year, Larson noted, “We are a lot deeper this year than we have been in years past. Since we have such a strong group of freshmen, we are really able to depend on every single position for a win.”

In response to how this year is different from the past, Malhotra noted, “We have a really young team and a lot of talented freshmen that have increased the competition within the team and pushed the older girls to get better themselves.”

The women’s tennis team has their next match this Wednesday versus UW-Stevens Point at the Lawrence courts, and over the weekend the top five singles players will travel to Gustavus Adolphus College to play in the Intercollegiate Tennis Association Regional Championships to compete for spots in the national tournament this spring.

The Viking women’s tennis team has already secured a place for themselves among the top teams in the state this season, so we can expect great things from these women in the weeks to come.