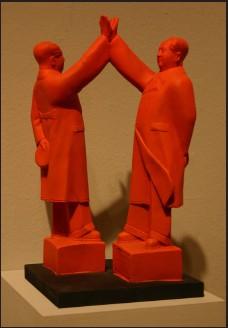 A bright yellow iconic smiley face confronts you when you walk into the exhibit. Sculpted relief-style into the center
of the face is the realistic chin and grin – crooked teeth and all – of the artist’s own face.
“Self-Portrait as a 70s Icon Having a Nice Day” is part of “A Face in Time,” this term’s exhibit at the Wriston Art Gallery by sculptor, artist-in-residence, and associate professor Rob Neilson. The exhibit consists of Neilson’s smaller gallery sculptures, as well as photos
and maquettes of various
existing and proposed works of public art.
Neilson delivered the exhibit’s opening address last Friday evening,
expanding on his “fascination with common place objects” and “fantastic representation.”
“I wanted to undermine [society’s] sense of individuality by putting myself into everyday objects,” he drawled. Neilson has a very casual ease about him when speaking about his art. He continued, saying he wanted to attack the “car culture” and “Henry Ford aesthetic” present in society today through art that uses the icons of society, analyzing them precisely because we choose them as icons for society.
Professor and Wriston curator Frank Lewis commented on the Neilson exhibit. “Working with conventional, everyday objects, he seeks ways to ironically insert himself into the experience of the viewer,” Lewis said, “thus subverting the idea that a work of art is always about the artist’s personal feelings and struggle.”
The works present in the Wriston exhibit do just this. As you enter the second
gallery, the room is a forest of pedestals
– the bottoms rimmed in the flames of “white-trash car culture” Neilson said. Each pedestal is topped with various small sculptures, none larger than a bowling
ball. The largest among them, entitled “Self-Portrait in Anticipation of a 7-10 Split,” is a set of bowling pins with the artist’s screaming face sculpted into each. Another is a bust of John F. Kennedy that looks normal from the front; upon closer examination, the artist’s face emerges from the top of the hair. Icons like these represent the culture Americans create for themselves.
The poster child for the exhibit is a gilded cast plastic Buddha complete with the artist’s grinning face and dragging
ear lobes. “Self-Portrait as Tony, the Irish Buddha” is the artist’s recreation of a Buddha he saw as a child in the house of his Irish Catholic grandfather. It represents
the artist’s own history. “How did I get here?” Neilson mused in the lecture. “And how did I become a sculptor?”
Part of the appeal of Neilson’s sculptures
lies in this simultaneous historic feel and clear disconcert with historical accuracy. “I refuse to let a pesky thing like facts interfere with a good theory,” he later laughed.
And indeed, many of the artist’s sculptures mirror his disregard for facts. The second part of the Neilson exhibit consists of proposals for the replacement
or augmentation of various public
monuments, such as “Proposal for the Replacement of the Washington Monument” with four giant, stacked busts of Washington himself.
“There’s a lot of rejection in the business of public art,” said Neilson, who has written a letter to the President Bush proposing his Washington Monument replacement. “I’m going to make something
so big, so ridiculous you have to reject me.” He has yet to hear a reply from the Oval Office.
Rob Neilson’s “A Face in Time” can be seen at the Wriston Gallery through March 12, Tuesday-Friday from 10-4 and Saturday-Sunday from noon-4, accompanied
by selections from “History of Printmaking” by Warrington Colescott from the Wriston Gallery’s permanent collection. 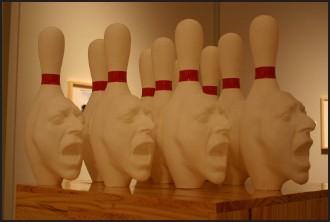 Jessica Vogt Neilson’s “Building a Better Mao” (Cora Schroeder) A bright yellow iconic smiley face confronts you when you walk into the exhibit. Sculpted relief-style into the centerof the face is the realistic chin and grin – crooked teeth and all – of the artist’s own face.“Self-Portrait as a 70s Icon Having a Nice Day”…