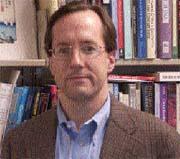 Mark Frazier, Lawrence professor of government, was recently awarded a Fulbright award and will be travelling to Shanghai to study retirement pensions in China. (Isaacson, Jonathan)

The specter of a shift in pensions is moving over China. At least that’s what Professor Mark Frazier asserts.Frazier, an assistant professor of government and the Luce Assistant Professor of East Asian Political Economy, was recently awarded a Fulbright research grant to travel to Shanghai, China, to conduct research into the development of retirement pensions in China.

“There is under way now a new social contact in China, in which the Chinese Communist Party [CCP] in order to maintain legitimacy and monopoly on political power is having to go beyond the old way of ruling,” he said in a recent interview with the Lawrentian. He described the old social contract as the CCP telling the citizens of China, “We’re in charge. We’ll provide the benefit of economic growth, and you get to work.”

Now that China is experiencing a great shift in so many areas, a new social contract is emerging and citizens are starting to ask for what Americans often take for a given. Protection from corrupt local officials is one such request. Another request, the focus of Frazier’s research, is the desire for a state-implemented retirement pension.

Frazier wrote his grant application to be a Fulbright scholar during the summer of 2004 and, in October, will leave for Shanghai, the city he and his family will call home for six months. While most Fulbright scholars visit foreign nations and act as teachers, a smaller number are sent overseas to conduct research.

Frazier, who speaks and reads Mandarin Chinese well, will likely be working through the Shanghai Academy of Social Sciences, but will also try to work in other cities like Beijing and some other providence capitals. He intends for his study to be twofold. Frazier will begin by conducting a survey of citizens, asking people how they perceive their new pension rights, how they fight to protect those rights, and if they use the court system against officials who have not paid them their pensions. The second part of his research will involve interviewing the government officials who administer the new retirement pensions system.

Explaining that in grant application, applicants are asked what the benefits from the research are for the host country, Frazier said, “I feel very honored to be chosen by a panel of academic colleagues … as well as American and Chinese dignitaries who select projects they think will benefit the host country.”

He continued, “What I said on this grant was there is so little information on how pensions work in China. There’s so much misinformation that a lot of times when I’m over there talking to government officials about China, they end up asking me to provide them with as much information as they’re able to provide me.”

“‘When you find out the answer to the question, let me know,'” is often the response he gets from officials within the Chinese bureaucracy, a bureaucracy with few equals in the world as far as complexity is concerned.

While the question of how the CCP is going to pay for all of the retirement pensions for the rapidly growing retired population – the number of retirees jumped by about 20 million people between 1990 and 2001 – might seem like a narrow public policy question, Frazier called it “nothing short of revolutionary” in a country like China, “in how the citizens can make demands on the rulers.”

Ironically, it was the CCP that started the entire process of reforming the pension system in the early 1990s as a way to reduce spending on retirement pensions of state-employed workers, by asking people to save money for themselves. The new system was established so that both the citizens and the government would be saving money for the pensions. However, while individuals saved their money, the government did not. The Chinese government has now accumulated an enormous debt that will be carried over to future generations of retirees.

The government of China has been dismantling the state-run industries and the work units, the topic of another of Frazier’s books on China, in the past 15 years. The former members of the work units have been part of the growing dissent within Chinese society over economic policy, including pensions.

The issue has already begun to spark protests, according to Frazier, including one during the late 1990s in which retired workers asking for their pensions carried banners proclaiming to the world, ‘We want to eat.’

Frazier views these protests as asking for the money they felt the government owed them. “Pay us our pensions, in effect was what they could have said.” These protestors really got the attention of the national leaders as well as the people seeing the protests, he said.

Based on his preliminary research on the topic, Frazier has already published one article, and hopes that his investigation will lead to an entire book on the topic, the title of which might be something like “China’s Pension Rights Revolution.”

“I’m not trying to say here that the pension rights movement is all about trying to become a more democratic country,” he said, “It’s about the government attempting to stay a step ahead of the rapid socioeconomic changes, and to do something to provide … basic socioeconomic rights.