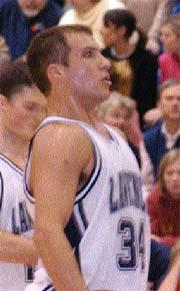 From the regular season it was clear that Head Coach John Tharp and his Vikings could win at home. Their perfect 13-0 mark this season includes sweeping the conference tournament and a first round NCAA Tournament blowout win against Lakeland College. It is clear now that the Vikings can win the big games on the road, and on a neutral court, posting a 72-66 win against Buena Vista University in Storm Lake, Iowa, a 86-79 gritty come-from-behind overtime victory over Sul Ross State, and lastly a heart-wrenching 82-81 loss in overtime to National Champion UW-Stevens Point. The Vikings used a complete team effort to defeat the Beavers. Their team defense allowed Lawrence’s big men, Chris Braier and Tony Olson, to effectively defend the talented Buena Vista forwards. With efficient double teams and help side defense, Braier and Olson negated the significant height advantage of Scott Weber and Randy Bissen. In the second half, Braier played like a man possessed and out-muscled the taller Buena Vista players, turning around the rebound differential that had hurt the Vikings in the first half.

In the middle of the second half with the score tied at 34-34, Chris MacGillis willed his team back into the lead with back-to-back three-pointers. To make things a little more interesting, MacGillis drew a foul on the last attempt, made the shot, then drained the free throw for the four point play, pushing the lead to seven.

With the victory the Vikings traveled to Tacoma to play Sul Ross State in Puget Sound’s sectional. The semi-final match up between the Vikings and the Lobos will go down as the greatest victory in Lawrence University basketball history, and quite possibly, one of the best comebacks the Division III tournament has ever seen.

The Vikings and Lobos played a fast-paced first half that featured the senior leaders of both teams. Rob Nenahlo came out early for the Vikings and helped them keep the game close. It was post player Derrick Workman who pushed the Lobos to an early lead, and kept them in front 39-33 at the half. The Vikings came out lifeless and sloppy early in the second half, and almost every Viking fan thought their tournament dreams were dashed when Sul Ross State took an 18 point lead at 61-43 with just under 12 minutes remaining.

Then sophomore Kyle MacGillis took over. MacGillis had four steals within four minutes, and the Vikings completely took over all momentum with several easy layups. The Vikings would take their first lead of the second half on an Aaron Sorenson trey with 4:27 to go in the first half, capping a 25-5 run in seven and a half minutes.

The Lobos would keep pushing, and had a four-point lead with just under a minute and a half remaining in the game. A Sorenson jumper cut the lead to two, and then a pair of Chris Braier rebounds, one on the defensive end, and then an offensive rebound of a Chris MacGillis miss, coupled with two free throws to tie the game at 74 and send it into overtime.

The OT was completely dominated by the Vikings. Chris MacGillis hit a three with 4:11 remaining to give LU a 77-76 lead, and they would not relinquish it again, winning 86-79. Jason Hollinbeck led the way for the Vikings with 16, but Kyle Macgillis and Sorenson were huge down the stretch, with 15 and 12 respectfully. Braier added 13 of his own in a performance which-along with what he would do the next night-would garner him third team All-American status.

The next night the Vikings faced the Pointers in an all-Wisconsin final in Washington. The Pointers had beaten up University of Puget Sound on their home floor the night before 100-79. The Vikings came out on fire, and it looked like they were going to cruise when they took a ten-point lead on a Chris Macgillis three pointer with 3:38 remaining. However, the Pointers came right back, cutting the lead to 4, and then the most disputed call of the entire game, and quite possibly the entire tournament, arose.

The Pointers got the ball after a Viking turnover at midcourt with six tenths of a second remaining. The pointers inbounded to guard Tamaris Relaford, who caught the ball at his waist, brought it up over his head and hit the shot from half court. All the Vikings fans and Coach John Tharp were outraged when the shot counted, as much more then six tenths of a second had occurred, but because the clock was started late, the shot counted, and UWSP was only down by one 40-39 at the half. As LU president Ric Warch would say at an on-campus celebration for the team, “If Rick Peterson (the Vikings scoreboard operator) was running the clock, we might all be in Salem right now.”

The second half was what a tournament game should be. Both teams played amazingly. The game went back and forth with the largest lead by either team being four points. The Vikings had the lead as the end of regulation came near, but Nick Bennett for the Pointers hit an amazing turnaround thirty foot three pointer with nine seconds remaining in regulation, and sent the game into overtime.

The overtime was just like the second half, back and forth, no team taking control. With 46 seconds remaining, Braier hit two free throws to put Lawrence ahead by one at 79-78. The Pointers came right down court and with 31 seconds left Jason Kalsow hit a jumper to put the Pointers up by one. Braier struck back for LU with another short jumper giving them the 81-80 advantage, but it was to be all for naught. The last series of the game started with Bennett having the ball for the Pointers. He found Nick Maus on the left side of the hoop, twelve feet away, and Maus nailed the game winner with 5 seconds left.

The Vikings, having no time outs left, inbounded to Dan Evans, who drove the length of the floor and kicked out to Jason Hollenbeck in the right-hand corner for the last shot. Hollenbeck who was 6-7 from behind the arc before the last shot released the ball, and as the buzzer sounded the shot hit the front of the rim, a few perilous inched from sending the Vikings to Salem.

Chris Macgillis would have 22 to lead the Vikings. Hollenbeck had 18, along with Braier. The Pointers would move on to the Final Four in Salem Virginia where they would win their first National Title 74-72 on a Kalsow buzzer beater over Williams.

The Vikings did take home some hardware this season, however. Chris Braier was named to the d3hoops.com third team All-America, and got a first team All-Midwest Region spot. Viking Coach John Tharp was named co-region coach of the year as well.

The Vikings will have to deal with the loss of four seniors next year, most notably Rob “The Rock” Nenahlo, and Chris “Smack” Macgillis. However, the team has a very good chance next season, as a core of the team will be back, and the memories of their last game will be fresh in their minds as they go back to work to try and deliver LU’s first ever back-to-back MWC title.

Andy York and Anthony Totoraitis Chris Braier was named third team all-American by D3hoops.com. (Gale, John) From the regular season it was clear that Head Coach John Tharp and his Vikings could win at home. Their perfect 13-0 mark this season includes sweeping the conference tournament and a first round NCAA Tournament blowout win against…