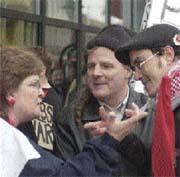 Lawrentians were hardly the only protesters opposing or supporting Bush Tuesday.The scene downtown in Appleton during President Bush’s PAC address could best be described as orderly but chaotic, the slow threat of rain never dampening the enthusiasm of the well over a thousand townspeople, Lawrentians, and area protesters who sacrificed a lunch hour to support or oppose President Bush and his policies.

The “townie” protesters ranged from young activists with patched backpacks and creative signs, to retirees and workers playing hooky, to seasoned political organizers. The debate was less over Bush’s speech in particular and more about a myriad of controversial issues, and electoral politics loomed large.

Police presence was calculable, security was controlled, and protesters from both sides seemed to relish having to yell over the helicopter circling above downtown for the entirety of the event. Streets within a couple blocks of the PAC were blocked off but-for the vast majority of the time-protesters stayed on the sidewalk.

One such seasoned protester came to Appleton on the heels of a “fact-finding” mission in Iraq: George Martin, Wisconsin Green Party spokesman and member of the Milwaukee Coalition for a Just Peace. Martin was one of several speakers at an organized anti-Bush rally brought together by many groups under the auspices of the Fox Valley Coalition for Peace at noon in Houdini Plaza.

“The US is spending ten to twenty billion dollars on the Iraq reconstruction, but you don’t see it [there.] There’s a lot of suffering and chaos, and many Iraqis believe that life during the reconstruction is 10 to 15 percent worse than it was before the war,” Martin said after the rally. Martin had exhorted rally-goers to exercise “regime change” in America.

Other speakers at the rally looked beyond a Bush presidency and called for defense against the proposed constitutional amendment banning gay marriage, especially one in Wisconsin that would go further than Bush’s proposed amendment and ban homosexual unions as well.

Several Bush supporters, in addition to more than a few merely curious onlookers hoping to glimpse an important moment in Appleton’s political history, watched Bush’s speech outside NBC-26 TV’s studios on the north side of College Avenue where it intersects with Appleton Avenue. Several anti-Bush protesters also moved near the studios during the speech to hear what the president had to say, although more than a few grumbles could be heard.

Randy Larson, 20, of Oshkosh stood at the intersection holding a Bush/Cheney 2004 sign. Larson appreciated the rights of anti-Bush protesters, but had a complaint about their arguments. “I don’t mind them, but I at least wish they’d support a candidate. I have hardly seen one Kerry for President sign the whole afternoon,” Larson said.

A man in his middle age supporting Bush, Henry (who asked to be identified by first name only) stood at the “Bush side” of the intersection in military fatigues from his service during the early 1980s. Henry came to “support my commander-in-chief.”

He watched the speech outside the studios and thought it made a lot of sense. “I don’t mind protests, but I just wish these people would stop and take notice that freedom is never free,” Henry said.

When asked what he thought of the protesters, Henry held up a middle finger.

“Hey, man, he doesn’t have a camera!” Larson joked upon seeing the “bird.”

On the south side of the same intersection, some of the more spirited Democratic and anti-Bush protesters sent noise across the street, shouting about the Patriot Act in particular, and-in organized cadence–down with Bush and Cheney.”

John Bauman, a schoolteacher from Oshkosh, stood on the anti-Bush side, wearing a Kerry button and watching it all unfold. “I’m a teacher who believes in civil disobedience. I should at least support what I believe in.”

The only real “skirmish” of the afternoon was a borderline shouting match around 12:45 when leftist protesters loudly objected that police had let Republican-party members returning from the PAC-some of whom held pro-Bush signs-walk down the middle of the street.

Signs on both sides were both colorful and creative, although one might argue that the colorful life-sized Bush portraits carried by his detractors-defaced in various ways, of course-took the cake as far as artistic forethought goes.

Nicholas Casper-Dan, a young man from Appleton, was among those organizing a number of anti-Bush slogans. “This is what democracy’s all about. We have to stand up for ourselves. It’s our civic duty.”

As police prepared to take the barricade down and let traffic resume westbound on College, the periodic drizzle began to fall more steadily. “Hey, the rain held off until this was all over. Maybe that means someone’s watching out for us,” Casper-Dan mused to his friends.

Clearly, many protesters were glad to have a higher profile than is normally offered by downtown Appleton or Oshkosh candlelight vigils and the like. As soft-spoken Ronna Smith of the Fox Valley Peace Coalition struggled to be heard above the din of the news chopper that flew overhead at the close of the Houdini Plaza rally, she paused and looked up.

As the crowd grew more attentive, Smith smiled and continued: “They’re watching us!

Peter Gillette Community members, who came out in support of President Bush, argue with Lawrence student Saleh Hijazi (see page one) about BushÂ´s policies. (Isaacson, Jonathan) Lawrentians were hardly the only protesters opposing or supporting Bush Tuesday.The scene downtown in Appleton during President Bush’s PAC address could best be described as orderly but chaotic, the…