Rik Warch
who can rest easily 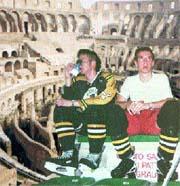 Two sad Delts sit amidst their mighty ruins, bemoaning the end of an era..

The Delts were surprised Monday afternoon when they discovered that their house had been mysteriously bulldozed in the three hours they were working at a local soup kitchen. Administrators are still unable to provide any information as to how it happened that the bulldozing company came when all the Delts were away from the house. “Sometimes luck is just like that,” commented Amy Uecke, the head of Residence Life.

Buck Beauregard, a member of the Delts, expressed sadness and shock later Monday, “It’s really a shame. We had a lot of good times in the house, a lot of memories. I feel really, really sad. I can’t imagine anyone could make me feel good again.” He added that any girls interested in trying can call him at x6768.

President Rik Warch said he was “entirely perplexed” by the mysterious destruction. “I have absolutely no idea who would have called a bulldozing company accidentally. I suppose the phone number must be similar to Papa John’s or something like that. Just a really sad mistake.”

Warch added that the problem may have arisen from occupancy rules not being met. “After all, if they’d had enough people in the rooms, this never would have happened,” he said.

When asked if there were plans to build a new Delt house, Warch said, “Oh, yes, but even better. It’s going to be open to everyone on campus this time, with a coffeehouse and several new food options. Oh, and the Delts won’t be able to live there anymore exactly, but I think they’re really going to like the ideas we’ve got.”

Self-proclaimed “Delt girl” Cinnamon Sullen was concerned about the effect the loss will have on the LU campus. “I mean, the Delts are really the heart and soul of this place. It’s like, I mean, it’s like all my best memories were from those parties, couches, rooms, showers. It’s gonna be real sad sauntering by with no one there to look at me. You know?”

In the meantime, the homeless Delts have been moved into doubles in Trever. “They’re real nice,” assured Uecke. “We think they’re really going to love it in Trever, there’s a really great community there waiting for them. Plus, Trever is really far away from the rest of campus.” The Delts will be living three or four to a room until a better alternative can be found. “Oh well,” said Uecke.

Carson Potato, a new pledge, said he was optimistic about the future for him and his new brothers. “It’ll be alright. The commitment to volunteerism is the only reason I rushed anyway,” said Potato.

Rik Warch who can rest easily Two sad Delts sit amidst their mighty ruins, bemoaning the end of an era.. The Delts were surprised Monday afternoon when they discovered that their house had been mysteriously bulldozed in the three hours they were working at a local soup kitchen. Administrators are still unable to provide any…