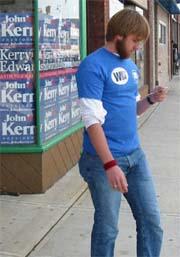 Senator John Kerry, the Democratic nominee for president, will speak tonight outside Lawrence University’s Alexander Gymnasium on South River Road in a rally sponsored by the College Democrats. Kerry moves into the Fox Cities hot on the heels of President Bush, who is speaking at 5 p.m. today in Oshkosh at its Wittman Airfield. While Oshkosh is Bush’s only Wisconsin stop during his visit, Kerry planned to visit Milwaukee and Sheboygan earlier today.

Although Kerry will likely not arrive until after 7 p.m., event organizers strongly urge rallygoers to arrive at or before 5:30 in order to move the crowd, which is expected to number well into the thousands, through security swiftly.

Since South River Road will close for the event, Valley Transit is offering a shuttle service between 4:30 and 7 p.m. The shuttle will depart from the College Avenue bus stop adjacent to the Seeley Mudd Library, and will also run a return route after the event is completed.

Each student may receive two tickets by presenting a Lawrence ID at the Memorial Union info desk or by visiting www.johnkerry.com.

Appleton police, university officials, Kerry organizers, and the Secret Service all promote the use of “common sense” as the key for moving large crowds of people efficiently through security points. As a general rule of thumb, anything that couldn’t be taken on an airplane or into a sporting arena will not be allowed at the event. Among these are umbrellas, anything that could be construed as a weapon, backpacks, and – in a stipulation that irks some members of the College Republicans – signs.

Signs will be allowed at the event provided they are distributed from within by campaign volunteers, who spent a couple hours in the Underground Coffeehouse Wednesday afternoon creating hand-painted signs with painted-on slogans.

The sign controls irk Bill Hanna, a College Republican member. “It really seems like a potential abridgment of free speech to me,” Hanna said.

Wednesday’s sign-painting event was part of a flurry of local and campus Democratic Party activity this past week that began when rumors of a Kerry campus visit began circulating amongst students on Monday and will culminate in tonight’s rally.

Early rumors of a Kerry rally began with student talk of Secret Service calls to the Lawrence University switchboard Monday. Until Tuesday morning, Wisconsin Democratic Party officials could not yet confirm the event, saying that the itinerary for Kerry’s Wisconsin visit had not been finalized.

But that morning, Andy York, president of the College Democrats, received a call from Steve Blodgett, director of public affairs for Lawrence University and the man coordinating media contacts and logistics for the event. Blodgett relayed the Kerry campaign’s interest in a Lawrence rally to York and asked York if the College Democrats were interested in sponsoring the event.

York and Kass Kuehl, the College Democrats’ vice president and director of programming, had been in contact with Kerry staffers about possible LU venues if a Kerry rally became possible, and so the event did not take campus organizers completely by surprise. Blodgett stressed that Lawrence University is in no way endorsing John Kerry, and that the event was contingent upon the interest and support of a student organization.

Blodgett stressed the importance of non-partisanship in university public affairs.

“If the College Republicans could get [Bush] to come, that would be great too, and we would certainly support that as well,” Blodgett said.

LUCR President Michael Papincak agrees that the university would be supportive, but thinks the LU students and faculty would make such a visit difficult. “If Bush visited, like he did last spring, the streets would be lined with protestors,” Papincak said. Although he is a Republican, Papincak will attend Kerry’s rally and not Bush’s, since he has Friday classes and has seen Bush speak before. “I’ll come dressed in Bush clothes. It will be my form of peaceful protest,” he added.

Some national media outlets have chided the Bush campaign for requiring “loyalty oaths” for attendance at some rallies. But “the Kerry campaign made it very clear that that’s not the way they do business,” Blodgett said. Not content to take the Dems at their word, a group of four LU College Republicans decided to test out the Kerry campaign’s open event policy. Dressed to the hilt in George W. gear, the group visited Kerry/Edwards’ Appleton office across from the PAC around lunchtime Wednesday.

By their unanimous accounts, the CRs were treated courteously, a few wary glances notwithstanding. “I was surprised at how easy it was. [The Kerry people] made it very easy. Maybe they didn’t want a ruckus, but it was a kind of courtesy you don’t expect when you see all the violent protests of the left,” Papincak said.

Although Kuehl and York were excited by the Kerry visit, Kuehl added that the size and organization of the campaign changes the nature of student involvement. “I really enjoyed having Senator Feingold come to Riverview [October 3]. That was more of an intimate gathering that we got together to get the campus excited … with a national election comes a lot of different controls,” Kuehl said.

Lawrence is not a complete stranger to the political limelight. Then-Vice President George H.W. Bush spoke here during his successful candidacy for the presidency. (Bush subsequently named the college’s LARY program the 312th of his 1,000 Points of Light.) Third-party candidate John Anderson also visited in 1980, and – in 1960 – both John F. Kennedy and Richard Nixon visited Lawrence at separate times during their close campaign.

Many political historians cite Kennedy’s razor-thin margin of victory in Wisconsin as the pivotal success that led him to win the electoral vote. Wisconsin in 1960 was a pivotal swing state. Some things never change, as this evening finds the fabric of the United States’ political universe strung together only by a thin stretch of U.S. Route 41.