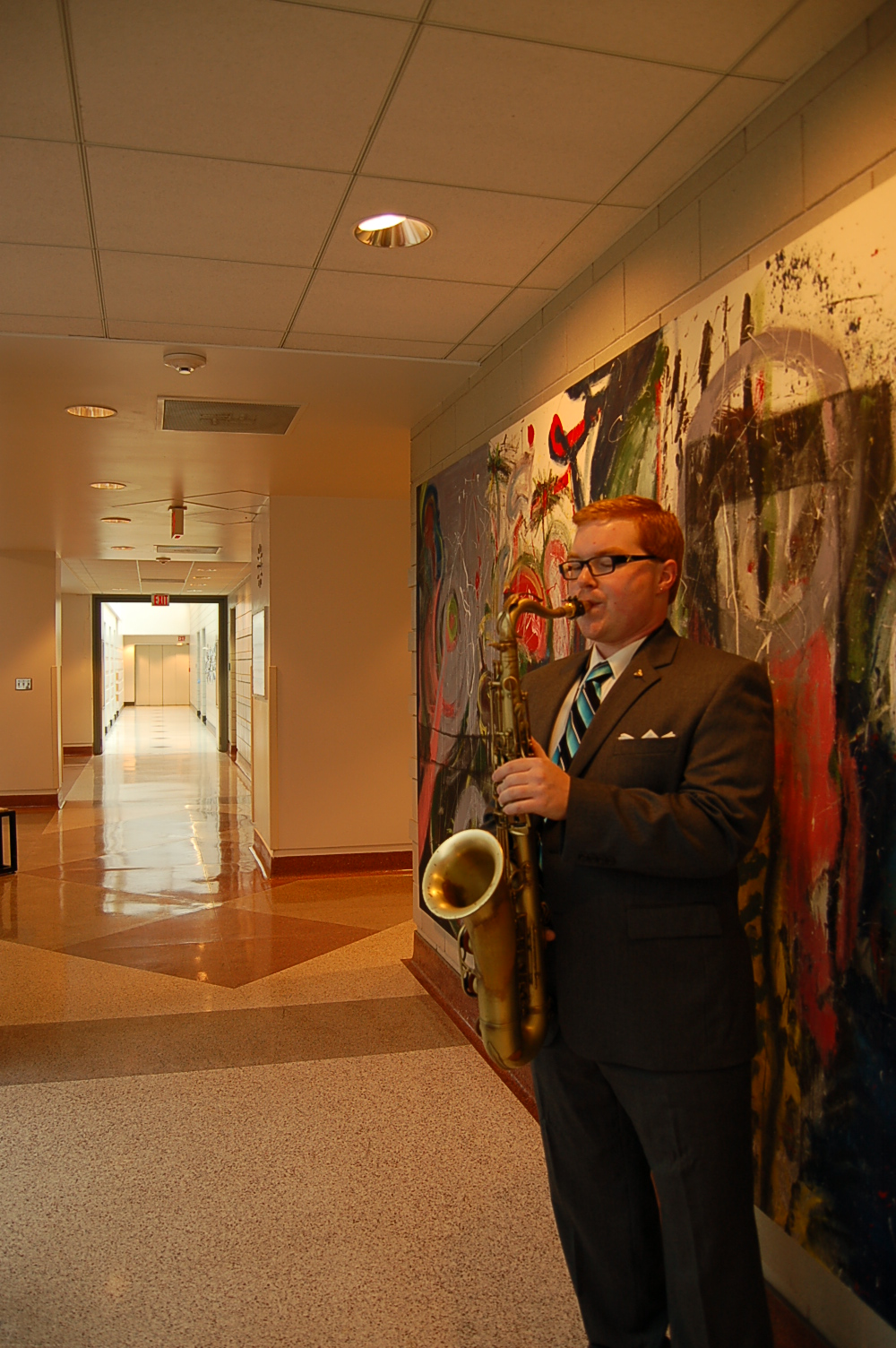 With Jazz Weekend just around the corner, conservatory students are preparing for clinics, forums with visiting artists, and performances.

Senior Cary Foxx stands out among the busy bees of the Conservatory hive. Not only is Foxx playing in the top Jazz Combo in spite of an injury, he is also working as musical director for another combo playing during Jazz Weekend.

Foxx’s jazz skills are showcased in his playing with the University’s Jazz Combo I. This is his first year being in the top Jazz Combo, and he is having a great experience.

He stated, “Being in a group with strong players across the board allows me to experiment more. It’s challenging for me, in the sense that everyone’s pushing their standards. The result is that we sound like a bigger band than we are.”

He also commented that his combo has a very interesting dynamic this year. Though all of the players are strong, they are all different ages. The combo this year consists of two freshmen, one sophomore, one junior, two seniors and two fifth-year students.

In addition to playing jazz, Foxx is now teaching it: he was appointed the musical director for Jazz Combo V. This is Foxx’s first time directing any kind of group, but he is taking a very mature approach to his responsibility.

He said, “I ask [the combo] what they want to play and balance that with playing the ‘tunes of the week.’ I also assign them tunes for certain reasons, to give them experience on modal tunes, two-five licks, standards, blues changes and rhythm changes.”

Foxx offers suggestions for the band’s performances and arranging of the tunes, but Foxx wants the combo “to ultimately play what they want to play.”

In addition to his work in the Conservatory, Foxx is a participant of various musical groups outside of the academic setting. Outside of the Con, he plays in the hip-hop group, The Dilla Gents, cover band Mike Pope and the Papal Schism and has been part of Jacob Horn’s ska band.

One might think that with all of these musical groups, Foxx is spreading himself too thin, but Foxx views his diversity as a beneficial asset.

He commented, “I love playing different styles. My appreciation of music has grown since I have been playing here. With that growth comes an association between the styles. For example, it is fun to play rock tunes with Mike Pope, but then when I go back to playing jazz, I have a better understanding of phrasing.”

All of Foxx’s activity this year has not been easy. Foxx has been dealing with a bad case of arthritis, which has proved to be limiting, if not debilitating, at times.

“I can’t practice a lot, so I use the time that I can play rehearsing with ensembles, which is still really important. When I can practice a regular amount, I don’t have to practice the fundamentals, because I’ve kept up my chops playing with the other groups.”

Due to his injury, Foxx has taken up a new hobby to fill some of his extra free time: longboarding. Foxx is currently a member of an on-campus longboarding crew named “The Kush Bandits.”

Foxx said that longboarding helps him with his physical and mental health: “It is fun and relaxing, to get my mind off of the pain, but very therapeutic physically because I need to balance, working my muscles, but stay relaxed at the same time, which helps with my posture.”

Look out for Cary Foxx this weekend, looking foxy in his gray suit, teal tie and teal Nike tennis shoes to match, tearing it up on tenor saxophone. If you miss him then, say “Hey!” to him when he’s cruising around campus on Matt Lowe’s “Fat Daddy.”