Katsu-Ya: sushi on the Ave 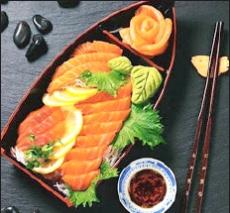 My night at Katsu-Ya was one filled with sushi, delightful company, and one memorable yet haunting trip to the bathroom. Nothing could have prepared me for the futuristic Japanese bidet event of the evening, a story that, for the sake of my own pride, can only be relayed in person and will not further soil this article.
We arrived at Katsu-Ya, located at 511 W. College Ave., on a Tuesday evening around 6 p.m. The restaurant was fairly busy from what I could gather during our winding trip through the carnival-like hibachi section, complete with oohing grandmothers and crying children.
We arrived by the sushi bar and were seated at a cozy booth with cushions on the benches. Our waitress arrived, introducing herself while setting down a tray of three rolled moist towels. This fragrant cleansing was the best possible way to begin a meal at a restaurant that doesn’t serve bread.
At our table was a flat-screen TV on which a muted anime film was playing. There were also three televisions behind the sushi bar, all playing the same movie. This made for an interesting visual effect and created a far more sophisticated atmosphere than previous encounters I have had with televisions in eating establishments (see any sports bar).
Indeed, Katsu-Ya’s ambiance is authentic and cozy, without being tacky. Junior Jen Cox praised the restaurant for its service and food as well as the decor, which she was relieved didn’t make the mistake of being kitschy.
The restaurant’s overall excellence both in presentation and food itself is owed to years of experience. Katsu-Ya, which opened in 2003, is the second restaurant owned by Hiro and Vicki Nakashima.
The Nakashimas have also owned and operated the restaurant Nakashima of Japan since 1988, managing the restaurant for 10 years before obtaining ownership. Nakashima of Japan was the first sushi bar north of Appleton.
Now 20 years later, the Nakashima family business seems to have caught on in the area, though not without effort on the Nakashimas’ part. They offer the Wisconsin Maki, a strange culinary ode to the Dairy State consisting of shrimp and cheddar cheese.
As any good meal unfolds, we began with an appetizer, the specialty edamame, and salads. I had the spinach aemono, which consisted of boiled spinach and a delectably sweet peanut and sesame dressing.
In between bites, we chose our sushi rolls; unfortunately due to time restraints, the little yakiniku grill in the middle of our table, another dining option at Katsu-Ya, went unused.
Katsu-Ya’s menu has an excellent selection of sushi for varying degrees of tastes and also offers vegetarian and vegan options.
Most orders of sushi are composed of six pieces– the “fancy” and special options consist of 8 larger pieces.
The sushi is priced reasonably, between $3 and $5 for most orders. Most of the vegetarian options contain avocado, asparagus and cucumber while there are a few more exciting items including the Shiso Maki, with mint leaves and plum paste, and the Oshiko Maki, with pickled radish.
James McDaniel, a vegetarian and a lover of ethnic cuisine, said, “Of all the places I’ve eaten sushi, Katsu-Ya has been my all-time favorite.”
For those that are not keen on sushi, Katsu-Ya also offers hibachi, a kind of interactive cooking that has been growing in popularity throughout the U.S.
Unless you come as part of a large party, you will most likely be seated with other smaller groups at a table surrounding the hibachi grill.
The experience of watching the hibachi chef in action is often complete with sizzling food flying through the air, a flaming onion, and other such endearing moves by the hibachi chef.
The hibachi experience tends to be a bit more expensive, as the meals include a Japanese clear soup, small salad, tea, a shrimp appetizer, and ice cream in addition to the meal.
The hibachi menu also offers the option of dinner for two as well as some combination dinners. You can also order sushi at the hibachi tables.
While Katsu-Ya is not a cheap meal, it is most definitely an enjoyable experience and more than affordable as the occasional night out. The restaurant is overall pleasing to vegetarians, meat-lovers, seafood and anime fans alike. 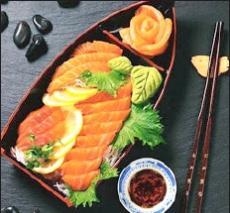