Season winds down for LU ultimate

Beth Bernhardt (right) battles for the disc with an opponent from Jacksonville State University at a spring break tournament in Savannah, Ga.
Weck, Alex 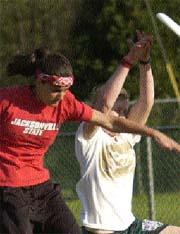 Beth Bernhardt (right) battles for the disc with an opponent from Jacksonville State University at a spring break tournament in Savannah, Ga. (Isaacson, Jonathan)

Soft in the Middle and Vici, Lawrence’s men’s and women’s ultimate Frisbee teams respectively, concluded their seasons this past weekend at the UPA Central Regionals in Whitewater. Soft in the Middle’s showing was similar to any of the many The Doors shows at which Jim Morrison performed stumbling drunk: there had been potential for greatness beforehand, but the actual act was quite disappointing. The team finished 13th after losing two straight to the UW-Madison B Pimpdags and UW-Stevens Point Homegrown. Carleton defeated Madison A in an 11-10 universe point thriller for the regional title. Iowa outlasted St. Olaf for the third spot to nationals.

Vici fared slightly better, going 2-3 in pool play before losing with a decimated team to the University of Minnesota on Sunday. Final standings list the women as having finished 8th, but sub-par tournament configuration prevented them from ever playing against the 7th place team. Carleton and Iowa will be representing the women’s region at Nationals.

Overall, the season has provided many competitive strides for both teams. Large newcomer participation made two teams for the men and a larger roster for the women possible.

Both sides competed quite well at the annual High Tide tournament in Savannah, Ga., over spring break. High Tide saw one of the split-squad men’s teams take home the B Division title and sophomore sizzler Alan Jameson take home MVP honors. On top of that, Vici was at one point ranked in the top 75 in the nation.

Perhaps a more important success for the teams came from their extremely spirited mentalities. Opposing teams consistently made note of Lawrence’s benevolent nature on and off the field. Such statements mean tons, as ultimate culture holds much more stock in spirited behavior than most intercollegiate athletics. After all, almost all games are self-officiated and uncoached.

Both teams lose significant leadership before next year, with the graduation of senior captains Katie Wilson, Colin Powell, and Brian Payne as well as many other experienced seniors. Soft looks towards current sophomore Aaron Jubb and junior Eli Carleyolsen as elected captains next year. Vici has yet to vote.

The overall attitude towards the season is perhaps best described by junior Vici member Kate Negri: “Perhaps you could say it rocked my socks so hard, that it rocked them off.