The phantom of the PAC

Gary Mauer as the Phantom and Rebecca Pitcher as Christine Daae in the third national tour of the Phantom of the Opera.
Behrmann, Brad 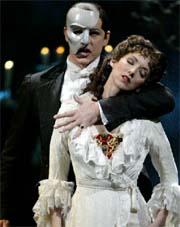 Gary Mauer as the Phantom and Rebecca Pitcher as Christine Daae in the third national tour of the Phantom of the Opera. (Joan Marcus)

For some theatergoers, the arrival of “The Phantom of the Opera” is like a baptism for the Performing Arts Center. Now in its second season, the Appleton venue has already attracted a number of touring productions of Broadway blockbusters, and the musical’s month-long run indicates the technical capabilities and financial draw of the Fox Cities PAC. From the mask buttons donned at downtown businesses to the caped mannequin in the Heid Music window, it’s clear that “Phantom” has begun its affair with Appleton.For those music theater enthusiasts who overdosed on Andrew Lloyd Webber during the ’90s and felt it necessary to put him away for a time, this production of “Phantom” provides an excellent opportunity to revisit Lloyd Webber’s work. The sheer spectacle is enough to thoroughly wow audiences. “Phantom” remains an undeniable technical masterpiece; if the singing doesn’t impress, the scenic design, lighting, and shifts do. With a number of tricks of the eye (and explosions), the show redefines the words “stage magic.”

Thankfully, though, the singing does impress. The technical ability needed to make “Phantom” a success should not be underestimated, and this cast includes striking and well-trained voices. Half the principles boast as many credits in opera and operetta as in musical theater. Rebecca Pitcher – perhaps the most talented member of the cast – portrayed a heartfelt and sympathetic Christine. Both Gary Mauer (The Phantom) and Tim Martin Gleason (Raoul) delivered well-crafted roles. Though some of their dramatic moments, which needed the most urgency, seemed to deflate instead, both brought incredible energy to their respective scenes with Pitcher’s Christine.

The supporting principles offer a delightfully comic contrast to the generally dark, heavy scenes of the three aforementioned characters. The gullible Firmin and Andr supply the requisite comic duo forh the show, while Carlotta and Piangi provide a laughable take on the opera diva stereotype.

“The Phantom of the Opera” plays at the PAC in Appleton until May 30. Rush tickets are available to students for $21 cash one hour or prior to curtain during weekdays.

The PAC has just announced its 2004-2005 M&I Broadway Series. Promising to be a stellar lineup, the shows include “Chicago,” “Evita,” “Wonderful Town,” “Hairspray,” “Little Shop of Horrors,” and a special return of “Mama Mia!” Visit www.foxcitiespac.com for more information.