Kicking off a weekend of great musical performances at Lawrence, all of the Lawrence choirs performed together on Friday, Feb. 22 in Memorial Chapel. They sang a wide variety of works, including a finale that combined all the choirs, and collaborated with instrumentalists from the Conservatory on many of them.

The songs spanned vast differences of time, geography, language and culture. Viking Chorale sang two works that were opposite in style but dealt with the same theme: Johann Sebastian Bach’s “O Jesu Christ, mein’s Lebens Licht” and an arrangement of a traditional African-American spiritual, “Soon I Will Be Done.”

Both songs reflect a profound awareness of mortality made bearable and even beautiful through a deep faith in eternal life promised by Christ. Although the composers wrote one in the formal Baroque style and the other in the informal traditional folk style, the distinctively peaceful tones of each song reveal a spiritual kinship. 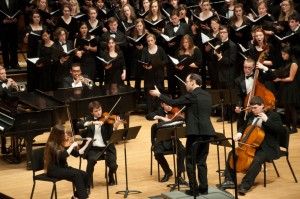 Cantala continued the religious theme with “Litanies à la vierge noire,” or “Litanies to the Black Madonna,” a work by Francis Poulenc about the mercy of the Virgin, which featured Katherine Hanford on the organ. They followed up with the premiere of an unearthly song by Timothy C. Takach called “And I Saw.”

They switched gears for “Los Dos Gavilanes,” a quirky and fun Venezuelan song by Cristian Grases using tongue twisters about sparrow-hawks and “geckos protect[ing] themselves in the shadows of goats and carry[ing] water bottles.”  The score suggests using percussion, guitar, and piano, so some instrumentalists lent their talents to give the song the tropical flair needed to pull it off well.

Other selections included the pretty “Sky-Born Music” by Paula Foley Tillen and “Spark” by Eric William Barnum, which suggests the flying, popping and whispering of a spark. Cantala concluded with “Pseudo-Yoik Lite” by Jaakko Mäntyjärvi, which the composer himself characterizes as an “impression of a stereotype.” It satirizes satires of the Finnish folk form of the yoik by adopting a deliberately “coarse and nasal” tone. The effect was certainly entertaining, as it was clearly meant to be, judging by the tempo marking “lively and slightly insane.”

Concert Choir collaborated with faculty and student instrumentalists for “Estampie Natalis” by Vàclav Nelhýbel, whose lilting piccolo line and tambourine reminded me of Renaissance music even though the work was composed in the twentieth century. They also sang Maurice Ravel’s “Trois Chansons” and Bach’s cantata, “Gloria in Excelsis Deo BWV 191,” featuring members of the Lawrence Baroque Ensemble. They finally sang an intriguing and dark ostinato-driven Filipino song called “Pamagun” about a predator chasing a sparrow.

All the choirs joined together for the final number, the Triumphal Scene from Act Two, Scene Two of Giuseppe Verdi’s “Aïda.” They used somewhat elaborate stage direction—lining the balconies, throwing their hands up and kneeling—to give the feeling of a grand opera performance. The placement and sheer number of singers gave the piece enormous power and strength, providing a rousing and satisfying end to yet another fantastic Lawrence choir concert.

Kicking off a weekend of great musical performances at Lawrence, all of the Lawrence choirs performed together on Friday, Feb. 22 in Memorial Chapel. They sang a wide variety of works, including a finale that combined all the choirs, and collaborated with instrumentalists from the Conservatory on many of them. The songs spanned vast differences…