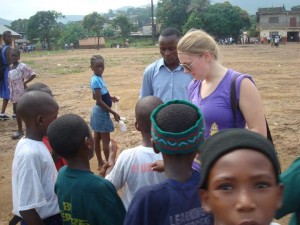 Lawrence welcomed alumna Samantha Maligi ’08 to the cinema Saturday, Feb. 23 to speak at the Sierra Leone Women’s Education event about the importance of education in Sierra Leone.  In addition to Maligi speaking, attendees watched 20 minutes of the film “Half the Sky: Turning Oppression into Opportunity for Women Worldwide”, the rest of which was shown the following day by the Mindfulness and Mediation club.

In opening her speech, Magili made clear her desire to make her speech as approachable as possible. She described her childhood in Sierra Leone as someone who was able to attend a good school. She lived in Sierra Leone prior to the civil war that spanned from 1991 to 2002. When she returned years later, she was struck by the vast change that had taken place in the structure of the country, as well as in the psychological wellbeing of the populace.

Her speech centered on the importance of education and specifically the education of girls. She described the importance of providing tools for success to women and girls; not just for the individuals but also in the greater context of the world. For example, $200 is the amount it would take to send a child to elementary school for a year. If this money were to be raised, this would allow the child to potentially use the skills learned in school to influence her entire community and potentially larger organizations beyond.

Lawrence University’s connection to Sierra Leone goes back to 2005 when Professor of Government and Edwin and Ruth West Professor of Economics and Social Science Claudena Skran was awarded a U.S. Fulbright Scholars grant. She used the grant to study the role of NGOs in refugee resettlements after the civil war, which lasted for 10 years.  After witnessing the impact that an incomplete education was having on individual children and the society as a whole, she decided to found KidsGive.

Aside from the goal of providing scholarships for children in need of a better education, KidsGive strives to educate students in the U.S. about other students in the rest of the world. Some ways that KidsGive has done this includes travelling to local high schools as well as fundraisers and the firsthand experience of travelling to Sierra Leone to deliver the funds that have been raised.  Another opportunity with KidsGive is interning for academic credit.

Recently, the men’s basketball team was able to raise $400 for Kidsgive by collaborating with coaches. A trip to bring the funds directly to the schools is being planned for December 2013. This visit will include sports days put on by volunteers as well as research projects concerning education, nutrition and water security.

Junior Huma Hakimzada recently volunteered in Sierra Leone for three weeks and describes it as “one of the most important experiences that I have ever had.” She described how seeing the joy of the kids opened her eyes to how much we all take for granted.

Recently, KidsGive has begun to collaborate with DePaul University for a music camp in the FAWE School in Mattru Jong. In this venture, students and faculty from both universities will travel to teach the students about a variety of musical instruments. Part of the excitement surrounding this is due to the fact that this is an opportunity for both parts of the university to have involvement beyond the social sciences.