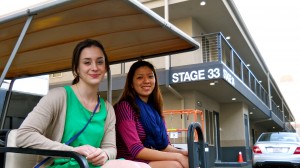 Five Lawrentians ventured to Los Angeles over Spring Break with the film department. These five students, with an expressed interest in film studies, were accompanied by Catherine Tatge ’72, current Artist in Residence at Lawrence, and the Associate Vice President of Major and Planned Giving Barbara Stack.

The trip was planned through the development office and film program and allowed students to connect with alums who are now working successfully in the film industry.

Senior Camilla Grove, a film student who went on the trip said of it, “There were a few purposes to this trip. The film department at Lawrence is growing to include film production, so we had the chance to talk with Lawrence alums that are in film, show them our work and let them know what is happening with film at Lawrence. It was a great opportunity for us because we got a lot of advice from Lawrence alums about the film industry.”

Students also got a chance to screen the films they made for the Civil Life Project during Winter Term to alumni in the film industry. The trip wasn’t all work. Students also got to tour the American Film Institute, met a lighting technician from Mole-Richardson Co. who does lighting for major films—and also owns the famous ‘Batman light’—and met one of the directors of “The Middle.”

Sophomore Nancy Corona noted that the alumni had optimism for Lawrence students no matter what they study, saying, “They pretty much said no matter what you study at Lawrence, somehow you can put it to good use.”