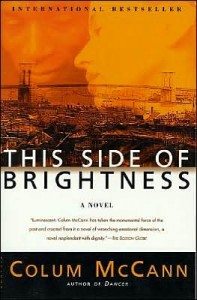 Popularly known for his beautifully moving novel “Let the Great World Spin,” Irish author Colum McCann returns to the city of New York to serve as the backdrop for his highly acclaimed work, “This Side of Brightness.”

Delving into the underground tunnels of New York City four to five times a week while beginning his first draft of the novel, McCann writes in an interview about “This Side of Brightness” found on his official website that he found himself meeting “all sorts of people—junkies, war veterans, people who’d recently been let out of mental asylums, others who had just lost their jobs. I was put in all sorts of different situations. Being Irish helped me—I was never seen as part of the established order, the system. I was outside.” With the help of those experiences, McCann certainly paints an accurate and very humbling image of what it is like to live without a home.

The story opens with a character by the name of Treefrog, a now-homeless man with a secret who had previously worked as a construction worker specializing in building skyscrapers, who frees a heron from the frozen Hudson river. While a seemingly futile gesture, it is a beautiful image that will serve as one of the key examples of freedom, a theme that is frequently found within the novel. Within the tunnels, Treefrog lives among prostitutes, drug addicts, criminals and the like and the many characters to which McCann introduces us are all unique and very much imperfect.

Within the narrative, Treefrog’s story alternates with the story of Nathan Walker, a “sandhog” who worked to build the underground train tunnels connecting Manhattan and Brooklyn. Their stories intersect when Treefrog moves to live in the tunnels Walker built. Navigating through racial differences and the challenges that occurred during the ‘30s and ‘40s in New York, among many other themes, McCann explores prejudice and brings to light the triviality of prejudice in all of its shapes and forms. In the train tunnels between Manhattan and Brooklyn where men of all colors and backgrounds risk their lives day in and day out to build these tunnels, one’s racial identity holds no status over another’s.

Through weaving historical fact and fictional truth by exploring the grit and dirt surrounding the lives of these men, McCann also manages to bring to light the hardships of the lower-middle class people who sometimes work dangerous jobs in order to put food on the table for their families. By focusing on places and people that are usually forgotten, “This Side of Brightness” may be seen as extremely depressing and dark to some readers. However, readers need to remember that we can try hard to turn a blind eye to sorrow and hardship but it will always exist. The key is to look for the little snippets of brightness that show up among the dark.

Taking that into account, “This Side of Brightness” is more moving and beautiful than sad as it takes us on a journey starting from the underground tunnels to the tippy-top of the tallest skyscrapers in New York City. Readers will find characters struggling and dealing with generational gaps as they read McCann’s beautiful passages about resurrection or rebirth of one’s life and existence.