Hi, I’m Prov gives a standout show in the Underground 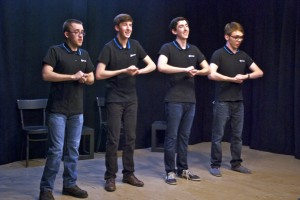 Last Friday, April 5, the Lawrence University improvisation troupe “Hi, I’m Prov” performed for an enthusiastic crowd at the Underground Theater in Memorial Hall. The troupe formed last year, and has been honing its improvisational skills up to this point.

The show was structured much like an episode of “Whose Line is it Anyway?” where the troupe has preset games that rely on audience participation to set their parameters. Though the format was familiar, the troupe offered a wide variety of games to inspire them and get the crowd smiling.

The first scenario was called “Emotional Party,” in which four troupe members were each assigned emotional states in which they must show up to the same party.  The crowd chose “looking for booty,” “flabbergasted,” “allergic” and “devastated.” The group was not fully connected in this skit. There were some awkward pauses amongst members of the troupe, and the actors started playing off of each other’s emotions instead of staying consistent to their own.

The combined creativity of the audience’s ideas and the troupe’s solid execution made the following skit, “Press Conference,” very funny. The scenario was “Air Bud holds a press conference because he is the new Pope.” Brian Zindler played Air Bud, and had to field questions from the other actors, who played “the media.” When asked his stance on the “All Dogs Go To Heaven” issue, he answered, “Evolving.” Here, the group’s collaborative strength was first seen: all themes were maintained, and humorous questions were met with equally amusing responses.

In the next game, a bachelor had to guess the identities of three contestants in the format of a “Dating Game.” The contestants? Captain Underpants, one with a deadly fear of pants, and a living bag of Doritos. This skit was very effective. The bachelor, Joram Zbichorski, asked questions appropriate to the style of a dating game. In answering, the contestants were crafty in hinting at their identities without making them absolutely obvious. Zbichorski was able to guess correctly two of the three identities, just short of the bag of Doritos, even with the hint of “Cool Ranch” slipped in there.

Perhaps the most creative skit the group did was called “Madrigals,” based off of the 16th century polyphonic song style. Four of the actors each got a headline from an audience member. They each needed to sing their headline with a different melody over each other. After they sang their headline, they proceeded to mix up the headlines, and keep cycling through before hitting a final chord. Headlines such as “Milk drinkers turned to powder” and “man trampled by moose in Canada” became “Canada turned to powder.” The simplicity of the concept and the quickness and confidence with which the group executed it made this skit my favorite of the night.

The troupe’s final skit, called “The Herald,” was a long and complex game consisting of intertwining skits and scenarios. Quick transitions between beaches and bike shops were made. Some story lines were developed: a bike shop romance was struck up, and they went on a date to a restaurant called “Water Galore.” Continuity in this skit was key. That was made by such plot developments and witty integration of themes from skit to skit. Mayonnaise was what rich people used for sunscreen in one segment and it was the main ingredient on a pizza in another.

Throughout the night, the pace at which each improviser played off of the others got quicker. The dialogues became more natural and fluid. The show reached a high point of hilarity…and then it was over. Look out for “Hi, I’m Prov,” who may be under a different name, in the future.