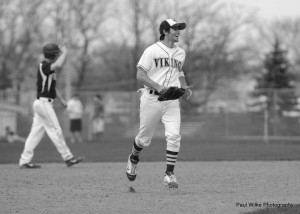 What does the Lawrence baseball team have to offer? Well first off, the team says they have a few guys who, “Don’t know the meaning of fun.” So watch out for these ones. Sophomore Tim Kinsella is way too serious. His routine is archaic, eating three bowls of Wheaties every morning to give him that pop he needs when he hits. They call him “trackstar,” because whenever he runs anywhere it’s like he’s in the 100 m dash in the Olympics. Additionally, Junior Sam Kossow apparently hates when the team puts on the song “Call Me Maybe.” The Vikings have been warned that he will smash the CD player it is put on. Last but not least, freshman Phil Ziller takes his job of being “Zilla the Killa” to heart.

Thank God for senior Phil Wisniewski, who keeps things exciting and fun. He was overwhelmingly voted the team’s funniest person to be around. It’s important to note that Phil is also known as “Wiz” or “Horseshoe” because of his well-defined horseshoe shaped triceps. “Horseshoe” is absolutely hilarious when he looks in the mirror and starts to flex. He contends that whenever he has a child, “Carlos Jr.” will be a natural power lifter because it is “in his blood.”

A special thanks to seniors Davide Harris and Richie Foreman, who put their thinking caps together to answer this question about who they believe is the funniest member of their team. “This is clearly a team all about working together,” they said. “Without a doubt, Phil is the funniest person on the team. It’s all about the story.”

Attention ladies! For those who are looking to fall in love with a member of the baseball team, the following are what these guys are looking for:

No allergies to leather or burlap; a great sense of humor; someone who is athletic and enjoys long walks on the beach; one they can trust; and, finally, the team is looking for a girl who isn’t afraid to get up and dance to Meatloaf’s “Paradise By the Dashboard Light.” “If you don’t dance, we’ll z ya never,” Wisniewski said. If you fit this description, support the men at their home games this season and maybe one of them will call you. Maybe?

See folks, the LU baseball team has a lot to offer apart from making a uniform look good. They hold a book club in the student lounge on Wednesday nights, which is open to community members and allows them to connect with the people of Appleton. They are full of comedy. There is never a dull moment in practice or a game with all the different personalities. Someone is always making a joke, whether it is “Zilla the ‘I lose stuff’ Killa” or “Knockin boots!” Putting his jokes aside for a moment, Wisniewski said, “The baseball team is not what it once was. We expect to win each game we play and we all expect to make the conference tournament.”

Best of luck this season!