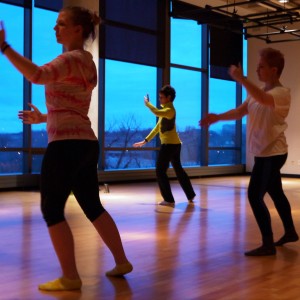 Tuesday, April 9 marked the first day that Tai Chi was offered at Lawrence by the Wellness Center. The class was taught by Fox Cities resident Justin Berens who has 10 years of experience with Tai Chi. The class was offered from 7 to 7:55 p.m. in the Hurvis room of the Warch Campus Center.

This new program began after junior Tony Capparelli approached WellU staff representative Erin Buenzli about adding an organized Tai Chi class to Lawrence. Capparelli had practiced Tai Chi before and said that “anybody can do it,” and that it’s a good form of exercise for musicians as well because it’s a “non-stress exercise that puts no tension on wrists or arms.” WellU worked with the Appleton YMCA to find a local teacher and the connection to Justin Berens was made.

Tai Chi originated as a typically weaponless martial art in China in the 12th century and over time it was embraced more popularly for the health benefits it provides. There are some movements in Tai Chi that are based mainly on the movements of animals, such as snakes and cranes.

Rather than emphasizing strength to the same degree as some other martial arts, those who practice Tai Chi focus mainly on achieving better balance and flexibility, with the result of strength. It is sometimes called “moving meditation” because of the tendency of it to allow a loss of stress in participants.

The action of Tai Chi involves tying together gentle muscle movements while maintaining deep and balanced breathing. The aim with this is generally to refocus and balance the body and mind, though often participants choose their own goal.

Some people prefer to use Tai Chi primarily as a way to aid in specific types of physical and mental healing. When done correctly, Tai Chi has been shown to aid in digestion, balance, gas exchange in the lungs and joint stiffness. Tai Chi is easily modified if a participant has health limitations.

The Mission of WellU is to support a healthy environment and positive, balanced lifestyles for the Lawrence community members in the physical, mental, emotional, spiritual, social, environmental, intellectual and occupational dimensions of wellness. Among other endeavors, WellU has worked towards this mission by offering classes such as Yoga and Pilates.

In response to student interest, the Wellness Center has recently added new offerings in addition to Tai Chi. Earlier this year Muay Thai was added to WellU’s list of classes aimed at wellness of the mind and body. Muay Thai is a martial art that originated in Thailand.

Every month the Wellness Center offers a Lunch and Learn during which a variety of wellness topics are discussed. These occur the second Tuesday of each month in the Kraemer room. The next Lunch and Learn will occur at 11:30 on May 14 and it will be about Professor Kathy Privatt’s Alexander Technique.