“Grey Gardens” is both heartwrenching and hilarious 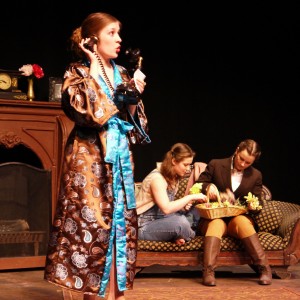 SPAMALU successfully presented its Spring Musical, “Grey Gardens,” in Cloak Theatre Friday, April 12 and Saturday, April 13. The production featured a broad and strong range of performers, from non-Conservatory freshmen to vocal performance-major seniors. While the plot is undeniably depressing, all of the cast members were uniquely brilliant in their respective roles.

The first act takes place in 1941, on the day of Joseph Kennedy, Jr. (Josh Eidem) and Edie Beale’s (Marie Clement) engagement party at Grey Gardens. This act was the definition of a classic ‘40s musical. Sadie Lancrete played Edith Bouvier Beale, Edie’s comically overblown and free-spirited mother who battled with her daughter to be the center of attention throughout the party preparations. Charlie Aldrich played the staple role of the gin-swilling, satirical pianist and Edith’s platonic companion while Eidem was the bland fiancé and Davey Harrison the strict grandfather, “Major” Bouvier. The storyline can be seen as one of a daughter trying to escape her crazy yet lovable family through marriage to a perfectly amiable man.  However, Grey Gardens takes an unexpected turn at the end of the first act when, instead of forgiving his fiancée for her wild past, Joseph leaves Edie and, furious with her mother, she leaves the house “forever.”

This brings us into the second act, which, with no prior knowledge of the musical, is both entirely unexpected and completely jarring. It is 1973 and Edie has returned to live with her mother Edith and the complete squalor that Grey Gardens has become. The women, both completely out of their minds, traipse around the old manor singing, cooking corn and fighting over the past as well as conversing with a seventeen year-old boy named Jerry who occasionally stops by to either help or steal from the older women. This act was refreshingly different from a typical musical, and it was as hilarious as it was tremendously sad. The characters, based off of real relatives of the Kennedys’, lived a sort of half-life and were both either too old or too afraid to leave it for something better. As funny as it was, I was still near tears by the end.

With respect to the cast, there was not a single member that did not provide the audience with a laugh at one point in the night. The musical was special in the fact that it allowed many of the cast to take on multiple roles throughout the night. Sadie Lancrete played Edith in the first act and then assumed the role of her daughter, Edie, in the second. Josh Eidem played the very proper and genial Joseph in the first act, and then switched to the teenager Jerry in the second act.

Sadie was a pleasure in both roles, but her comedic talent shone in her portrayal of the middle-aged and unmistakably deranged Edie. Freshman Catherine Bentley proved her acting and singing chops in the role of the older Edith and provided one of the best performances of the night. Her vocal abilities and comedic timing on the song “The Cake I Had” made it one of the most memorable parts of the musical.

With a cast blessed with less comedic brilliance, this musical would have fallen flat on its face. However, student director Ally Kunath took a difficult script and paired it with an extremely well -chosen and talented group of students to produce both a heartwrenching and knee-slapping production.