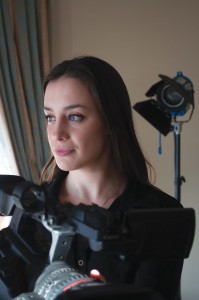 It’s almost guaranteed that you’ve passed Camilla Grove in the campus center. She’s there, sitting behind the info desk, on almost a daily basis. While this young woman is a great resource for all things campus related, she is also a documentary film-making genius.

In the past year, she has been working on a major documentary about Lawrence University’s Holocaust Symposium and is now well on her way to finishing a second project on the Hmong community in Appleton. Before she moves to L.A. or New York to become a successful screen writer or film producer, Grove plans to finish up her English and interdisciplinary film majors.

Grove’s interest in film began when she took a film adaptations class in high school for fun. “I wrote a screenplay on the short story ‘The Lone Ranger and Tonto Fistfight in Heaven’ by Sherman Alexie,” she said. “It was the first time I really enjoyed doing something and knew I was good at it.”

When she came to Lawrence, she continued to study film in any dimension it came in. “I recommend any class with Professor Guenther-Pal. She’s amazing,” Grove noted. “Future students are really fortunate because they’ll have access to more production classes.”

Despite the long list of successful documentaries and short films Grove already has under her belt, the project that has meant the most to her was the short film “Lemonade,” which she finished during her college career.

“It was based off of a flash fiction piece I wrote in high school about two parents waiting by the window, with lemonade, their missing daughter’s favorite drink. It meant a lot to me because every part of it was completely mine—of course with the counsel of my classmates and professors. In many ways it feels like the starting point for me understanding what type of filmmaker and screenwriter I want to be,” Grove said.

Her most recent project is an eight- to ten-minute film with two other students, supervised by artist in residence and Lawrence alum Catherine Tatge. The Civic Life project focuses on the Hmong community in Appleton.

“It’s on the tug of war between Hmong culture and American culture for the Hmong community here,” Grove explained. “It’s about finding the balance between generations. The older generation doesn’t speak English, and the young are getting Americanized. The fear of the community is that they may lose their culture completely.”

The project is still in progress, but Grove is excited to see the outcome. I’m personally excited to see the end result, as Grove and her group are doing exactly what film should do: providing insight into an aspect of life around us that we most likely wouldn’t be aware of otherwise.

When asked about life after college, Grove said she’s “really scared but also excited. Finding success in film means working your way up from the bottom, taking assistant production jobs and trying to make a name for yourself along the way. So I’ll be taking a leap of faith after college.”

Her advice to new aspiring screen writers is simple: “If you’re interested, pick up a camera and start shooting stuff—and take film theory.” For Grove, the beginning of her present and future success started as simply as that.