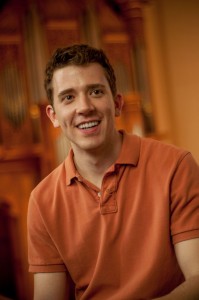 While the organ is an imperative instrument in musical history and in the musical world in general, it can be a hard sell to the casual listener. The organ is often identified with stereotypes of Catholic churches and Dracula’s castle. But organs are a wonderful and gorgeous piece of musical machinery, and fifth-year Dan O’Connor hopes to illustrate its potential at his upcoming recital.

A double degree student majoring in organ performance and economics, O’Connor started cultivating his musical side with the piano. Through church-going in his younger years, he was introduced to the organ. In middle school, he experienced an impressive organ being played at a music hall in Dallas, his hometown. The performance showed him the organ’s potential outside of a religious context, and by high school he was taking lessons.

“Certainly one of the challenges with the organ is that it’s an old instrument,” O’Connor says. “And so the range of repertoire you have to play is…well, there’s so much music. And unlike most other instruments, each organ is unique. So going to play a recital somewhere, you have to spend time with the organ and adjust to it.”

Economics, meanwhile, is something O’Connor has always been interested in. He places it in contrast to music as a way to balance the various facets of his interests.

“For me,” he explains, “music has always been about expressing myself creatively. And then economics helps balance my more rational side.”

To cultivate his economics side, O’Connor and a few friends worked to start a business called Flicky. He’s had to take a break from it to prepare for grad school, but he reflected that preparing the foundation of a business, including searching for investors, was a fun and rewarding experience.

O’Connor went to Lawrence to pursue music at a higher level while still being able to have an education outside music.

His recital will be all organ music. The first half is earlier works, composers such as Bach and Marchand, while the second half is content within the 19th, 20th and even 21st centuries, showcasing Mendelssohn and Duruflé among others.

“There will be some pretty epic pieces for sure,” he said. “Then some softer, more meditative pieces as well. I think the music in my recital is exciting. Unfortunately there’s not much to watch in an organ recital since the musician has his back turned to the audience. But I hope the music I’ve picked is interesting enough to keep people engaged.”

O’Connor will be heading to Yale next year to continue organ performance. His plans post-higher education remain mysterious, and he expressed worry over balancing his interests, but for the time being he has a direction to head in.

“I’d absolutely like to thank my organ professor Katherine Hanford,” O’Connor said. “Also my first organ teacher back in Dallas, who was actually a Lawrence grad. All of my professors here, really, I should thank.”

The recital will be at 6 p.m. on May 26 in Harper Hall. It is not often that one gets to hear the range of music an organist is capable of producing. Take a chance and go see for yourself.