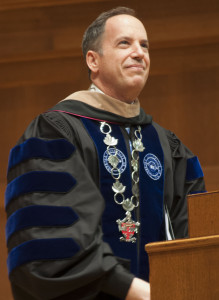 On September 19, 2013, Mark Burstein, Lawrence’s 16th President gave his convocation speech, “Crossing the Threshold: Community as Curriculum.” In his first ever convocation, President Burstein discussed the university’s strengths, concerns and the community-focused curriculum that he hopes will serve as the university’s direction under his presidency.

President Burstein discussed both his ideal of community and how that relates to Lawrence. For Burstein, the meaning of community has changed and become “a new understanding of commonality, defined, in part, by a sense of shared purpose.” Burstein’s definition transcends superficial characteristics, such as gender, race or place of origin. When he talked about Lawrence community, he pointed out that “we are a voluntary community, formed more by active participation than common beliefs, geographies, or origins.”

President Burstein discussed the importance of participation in Lawrence’s growth. Learning is transmitted in the classroom from faculty to students, and beyond classrooms in the Warch Campus Center, residence halls and the library. He said that the campus activities and community service opportunities also increase the understanding of ourselves, whether we are in the college or the conservatory. “This learning community is carefully tended by faculty, staff and nurtured by all Lawrentians,” he said. There are pedagogical differences and physical divisions at Lawrence, but “the shared sense of Lawrence is palpable.”

Talking about different opinions and perceptions, President Burstein said, “If we truly prepare our students to be public agents in a complex world and to prepare students to work with people very different from themselves, then we must provide access to the diversity of opinions that exists in the world today.”

Coming from an East Coast Ivy League environment, President Burstein admitted that he had seen how egotistical competiveness can hamper learning and community connection.  He believes that the “pursuit of knowledge irrespective of disciplinary boundaries is essential to be the intellectual community we strive to be.”  As for the Lawrence community, he believes that “our humble approach to learning makes us uniquely prepared for this goal.”

Sam Clary ’14, the treasurer of LUCC, was in agreement with President Burstein’s idea about the importance of community through participation. Clary said that Lawrence as a residential campus provides a unique opportunity to interact with people who have varying ideas and experiences. “I am glad that I get to be around the people here and be exposed to differing perceptions. It has caused me to grow a lot as a person over the past three years as a student here.”

Nicholas Paulson ’14, the president of Lawrence University Community Council (LUCC), also found the discussion about conflicts valuable. Paulson said that by “refusing to have that conversation with someone you disagree with, you are, to some extent, perpetuating the problem.” Paulson believes that having an honest conversation with people with different views can be helpful to both sides to have a better understanding about each other.

With his experience working in residence life for three years and his role as the president of LUCC, Paulson realizes the importance of learning outside of the classroom. He is curious about how to encourage this kind of learning, and he is eager to see what kind of steps the president’s office will take that are going to make a difference the way Lawrentians interact and strengthen the community here on campus.