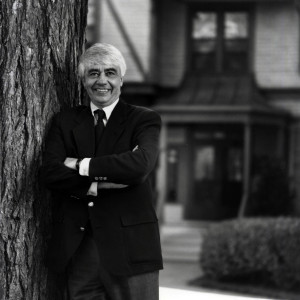 Richard Warch, Lawrence’s 14th president, recently passed away after a long battle with cancer, leaving behind a distinguished legacy at the university.

According to the official press release from Lawrence, Warch’s 25-year term as president made him the university’s second-longest serving president after Samuel Plantz, who served for 30 years. Over 20,000 of Lawrence’s living alumni were at the university when it was under President Warch.

Warch, whose most famous phrase is, “Your business here is to learn,” was a beloved figure. Even for students who never knew Warch, his famed efforts to integrate himself into the everyday happenings of campus are still talked about today.

“Rik Warch’s tenure as president was the golden age at Lawrence,” said Fred Sturm, the Kimberly-Clark Professor of Music and Director of Jazz Studies. “I recently remarked to a friend that Rik could slum comfortably with those of us at the bottom of the university chain, spar with the intellectual heavies at the top, and connect with everyone in between—with genuine interest, compassion, loyalty, and rare wit.”

Even for students who only know the name Warch as the name of the campus center, Warch’s legacy on campus includes the construction of six new campus buildings and major renovations of over four buildings. Additionally, Warch made a number of changes to the curriculum during his time here. While Freshman Studies is traditionally associated with Lawrence’s 10th president Nathan Pusey, the program was briefly dropped during the 1970s and was reinstituted by Warch. He also refined Lawrence’s liberal arts standards when he instituted stricter distribution requirements, which called for all students to take a broader range of classes and thereby embody the idea of “liberally-educated persons.” He also worked to establish a bridge between the previously very separate lives of students in the college and the conservatory by instituting a bachelor of arts in music. Warch may be most respected for his efforts to unite Lawrence with its northern campus, Bjorklunden, which he rebuilt and renovated to make it the place Lawrentians know today.

Warch decided to continue facilitating the university’s evolution from other posts even after his retirement from the presidency in 2004. He was the chairperson of the Bjorklunden Advisory Committee for several years, and he continued to speak at milestone reunions until his health prevented him from doing so in recent years. But, according to Mark Breseman ’78, the Associate Vice President of Alumni and Constituency Engagement, Warch made an effort to be involved with Lawrence even as his cancer grew worse. As an example, Breseman highlighted what would be Warch’s final public appearance before his death: a speech given at a gala at Bjorklunden this past August.

“Physically, he was beat down,” said Breseman. “I met with him a week before the talk, and I said, ‘Rik, you don’t need to do this.’ And he said, ‘No, I’ve been working on this speech all summer, I’m going to do it.’ The day of the [talk] came. First, Rik ran the Bjorklunden Advisory Committee meeting in the afternoon, then went into his room to rest for an hour or so, and then came back and gave the talk. He wrote this talk just for this session. It was a twenty-minute talk on the importance and relevance of a liberal arts education today. When you’re thinking of all the [critics] and how the internet is changing things and people are saying you don’t need a residential campus and we should forget the liberal arts, he wrote this fabulous speech on how it is relevant and is necessary and he delivered that speech without a hitch. Then he sat down and signed a bunch of his books. But to me, that story just encapsulates his passion for the liberal arts and Lawrence in general.”

Breseman’s perspective on Warch was unique due to his experience as a student at Lawrence during Warch’s time as the Vice President of Academic Affairs and Professor of History, as well as his time working with Warch on the administrative level. When asked what campus could do to keep Warch’s memory alive, Breseman simply said, “The best way that current Lawrence students can honor Rik’s memory is to do embrace the liberal arts education and learn. Embrace learning as their business. Keep that phrase in mind.”