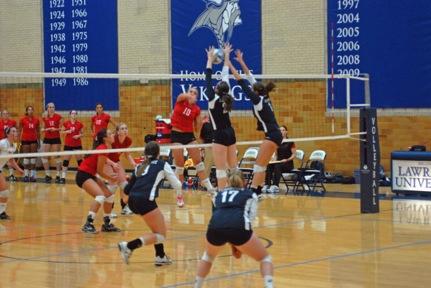 After losing the first set against Grinnell, the Vikings roared back by taking the next three sets to clinch the victory. Trailing 22-20 in the second set, the Vikings battled back to tie the set at 25-25. The Vikings then finished off the set with back to backs from junior Jenna Picha and junior Emma Kane.

After that, the Vikings gained momentum and won the next two sets. Statistical leaders for Lawrence were junior Shannon McLain and senior Clare Bohrer with 13 kills each and 11 kills for Kane. Sophomore Diane McLeod had 44 assists and sophomore Kathleen Rowland contributed a match-high 25 digs.

There was far less drama on Saturday versus Knox. The Vikings had slim leads in the middle of the first two sets but pulled away in each of them.

In the third set, Lawrence started off with a 4-3 lead but then went on to score 12 consecutive points to distance themselves and seal the deal. Statistical leaders for Lawrence were Bohrer with 10 kills and freshman Betsy Sorensen with nine kills. McLeod had 29 assists and Rowland added a team-high of 16 digs.

With these two wins, Lawrence now stands atop the standings in the Midwest Conference with Monmouth College and St. Norbert College as the only teams without a conference loss.

When asked what are the traits that allow the Vikings to win close matches, Rowland answered, “The key factors are perseverance and execution. Positivity and the desire to leave it all on the court are also important. Even the crowd adds to the intensity!” Out of the seven sets played last weekend, Lawrence won three of them by the slimmest of margins of two points.

After winning their first three conference games, the Vikings are off to a good start. “We’re feeling pretty confident about the progress that we’ve made so far in our season,” added McLain. “We definitely need to keep our focus strong as we continue through conference.”