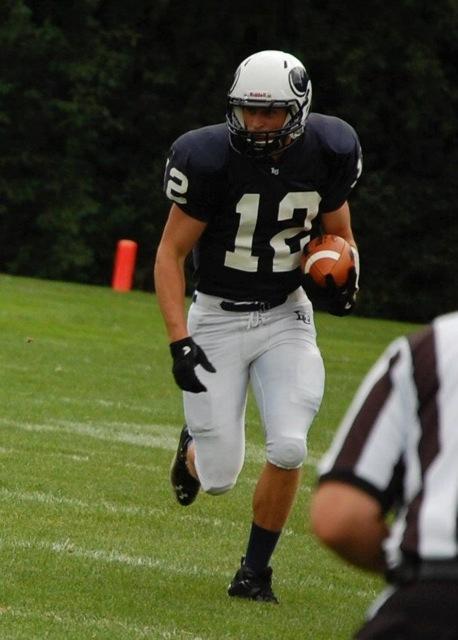 I would say the biggest challenge is the change in mental preparation for the game. I had played QB my entire life, and now the position switch showed me just how much different the game is from another position. The thing that has been most fun about the switch is the new relationships I’ve been able to form with the receiving corps, and even with our QBs Bart and Kossow.

You’ve broken several school records this season. Which records did you break, and how does it feel to be in the LU record books? Any records that you haven’t broken that are on your list for the future?

In our game against Knox I tied the record of 4 receiving touchdowns in a single game and set both the records of five touchdowns in a game and of most points in a game with 30. I really feel honored to be listed in the record books here at Lawrence because there has been such a great football history for so long. I think a couple big goals as a receiver would be both the single season records for touchdown receptions and yards.

If you could play professionally with any team, which team would it be and why?

I would love to play for the Green Bay Packers. They have been my favorite team since I was little; there is such a rich tradition here in Wisconsin, I think it would be awesome to put on the green and gold and play at Lambeau Field.

How have the newcomers on the team added to the team dynamic and helped the team’s play?

The freshmen class this year has brought so much talent to our team both on the offensive and defensive sides of the ball. Many of the freshmen have already made huge impacts on the games we have played this far, and we expect them to continue to do so throughout the season.

What are your personal goals for the rest of the season? What about the team’s goals?

My number one goal, and the goal of our team is to win the remaining games of the season. This team has the potential to do so.

What are the team’s goals for the remainder of the season and how are you guys planning on accomplishing them?

Our goal is to stay consistent as we continue to advance in Conference play. Our ultimate goal is to win the conference championship, and I definitely think that this year’s team has the capability of accomplishing that goal. As a team we need to focus on playing Lawrence Volleyball and to execute the fundamentals of the game at a consistently high level.

How have the new additions to the team impacted/helped the team this year?

We have three wonderfully talented freshmen this year, and they have been an incredible asset to the team. Betsy Sorensen and Presley Nuemann have been killer forces up at the net, both playing the Middle Hitter position. Kayla Storm has made a great impact in the back row as well as up at the net, stepping in and playing consistently when we need her the most.

What have been some of your favorite memories from the past few years on the team?

Some of my favorite memories include traveling to St. Louis to play the defending national champions for our first tournament my freshmen year, beating Eau Claire, a nationally ranked team, in 3 games on our home court, and beating the first ranked team in Conference, Monmouth, last year.

What are your personal goals for the rest of the season?

By the end of the season I would like to be a stronger and more reliable blocker, especially against teams that run a quick offense. I would also like to continue to be a smarter attacker, finding holes and weak spots on the opposite side of the court. Lastly, I want to make sure not to take for granted the time that I spend working with the team on and off the court. I continually remind myself that the group of women and coaches that I am blessed to work with are some of the most driven, hard working, and ambitious people that I know. To achieve something as phenomenal as winning a Conference title with them, would be an absolutely incredible way to finish my athletic career at Lawrence.

If you could play any other sport at LU what would it be and why?

If I could play another sport at Lawrence it would probably be basketball. I have such a great respect for the girls on that team. Sadly to say, I am horrible at basketball. For everyone’s sake, I will stick with volleyball. 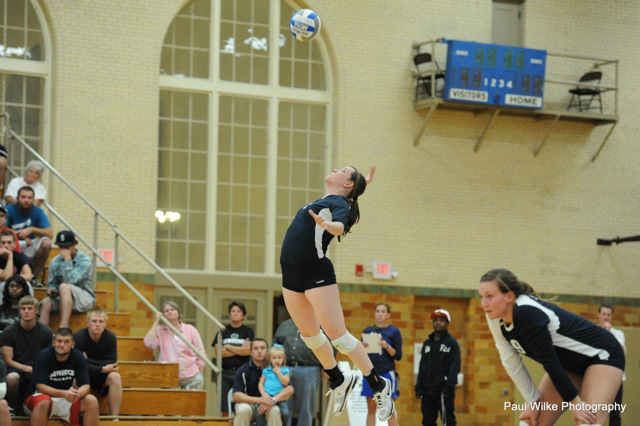