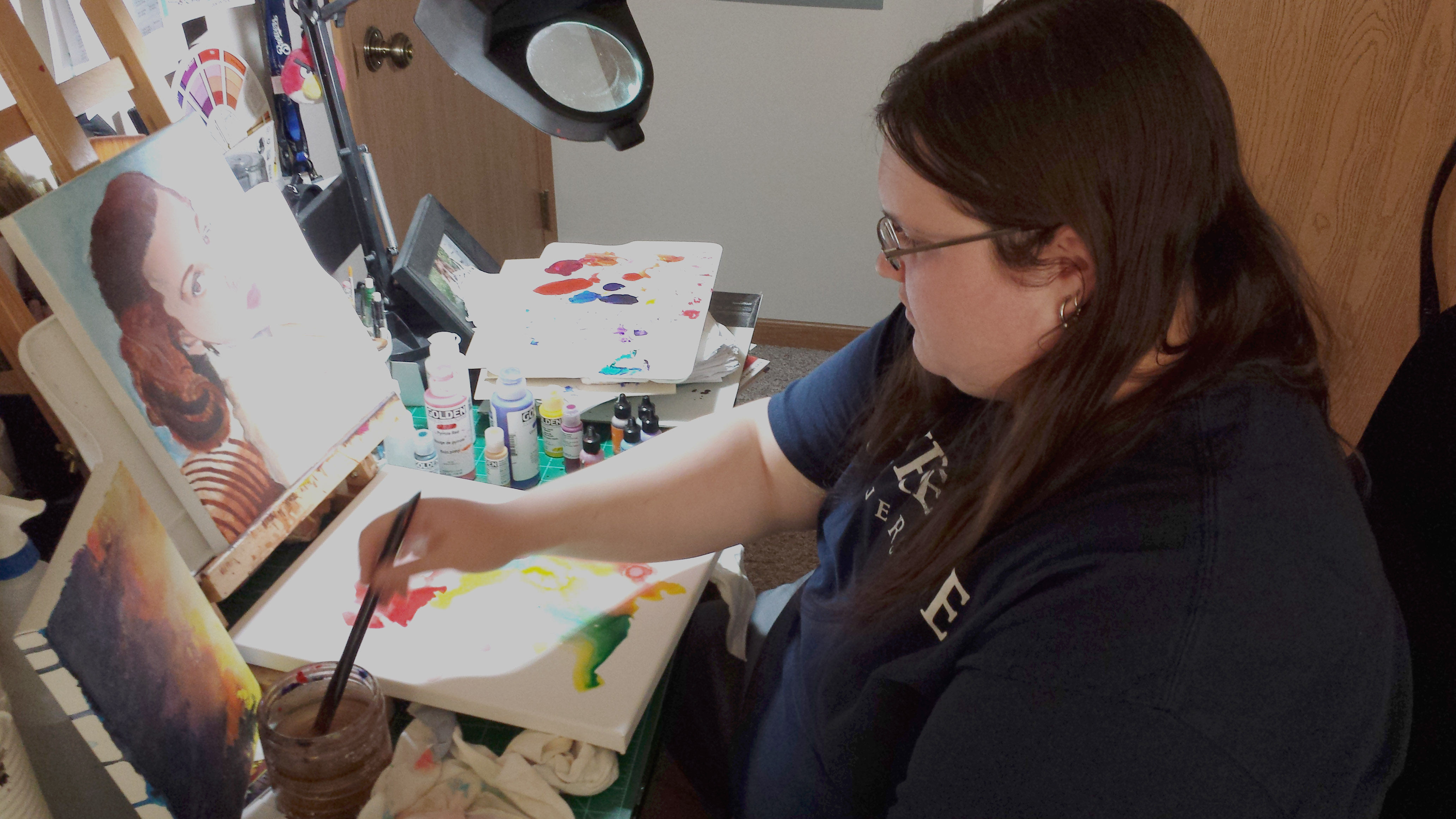 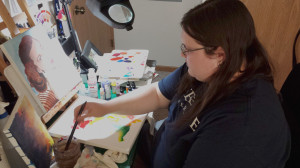 Communication is tricky. Words are not as foolproof as we would like them to be. Especially in the emotional realm, simple verbal communication is often not enough. Luckily other means exist for expressing oneself. Junior Lauren Stinski has found a wonderful source of expression and communication in painting. Her work is up for sale in the Rabbit Gallery on College Ave. next to Acoca Coffee.

“I’ve painted ever since I was little,” explained Stinski. “Art was a very convenient and exciting way for me to express myself. I’m shy in general so art was a constant companion to me, a good way to express myself without having to physically talk to people.”

Stinski sees art as catharsis, a way by which to take negative emotions like depression and anger and translate them into a positive experience. Although she believes in art for the art’s sake, she decided to pursue a studio art major because she is confident in her ability and knows that she makes images that are worth sharing.

“If I can involve my career with the creative arts,” said Stinski, “whether it be as a gallery curator or a graphic designer or painting murals, I’ll be doing something I love, and I won’t feel like I’m working.”

The Rabbit Gallery features four of Stinski’s works. She responds strongly to themes like mental illness, perception and depression. Two of the paintings, “Anxiety Disorder” and “Finding Order,” are purely abstract, a style that Stinski feels most comfortable with. She enjoys using colors to express her emotions. For instance, depression is aligned with blues and purples. She described it as “frozen energy,” or capturing an emotion on canvas.

Her painting “Stoic” is similar, except it combines the abstract with a self-portrait. While by and large she finds realism too constricting, she does occasionally like to add hints of it. The result is a personal and deeply affecting reflection on self-consciousness and identity.

Lastly, her painting “The Fall of Evelyn McHale” is an interpretation of a powerful photograph taken in 1947 of the eponymous woman, who jumped from the Empire State Building to her death, crashing into the hood of a car on the street below. Suicide is typically depicted as gruesome and brutal, but in this photo she instead looks serene, almost angelic. Stinski painted her own version of this photograph and spliced it with a self-written version of McHale’s suicide note.

Using this sort of technique brings an uncomfortable topic like suicide out to the forefront in a graceful manner, emphasizing emotional pain over the physical.

In addition to these pieces and these styles, Stinski enjoys painting portraits of Judy Garland and old photographs of her family.

Stinski is an only child with a close relationship to her family. After graduation, she hopes to move to Arizona with her parents, take a gap year to see the world and afterwards get her master’s degree in painting.

Outside of art, Stinski loves to be around animals, play videogames, listen to big band and classical music and write poetry.

The artist whose main focus is to express herself through art is significantly less self-involved than the archetype might lead one to believe. Stinski is a superb example of the contrary. Her paintings are emotionally charged reflections on important human experiences, not self-obsessed but self-reflexive in a way that speaks beyond words. With mere brushstrokes, Stinski is able to communicate something rare and beautiful.

Communication is tricky. Words are not as foolproof as we would like them to be. Especially in the emotional realm, simple verbal communication is often not enough. Luckily other means exist for expressing oneself. Junior Lauren Stinski has found a wonderful source of expression and communication in painting. Her work is up for sale in…