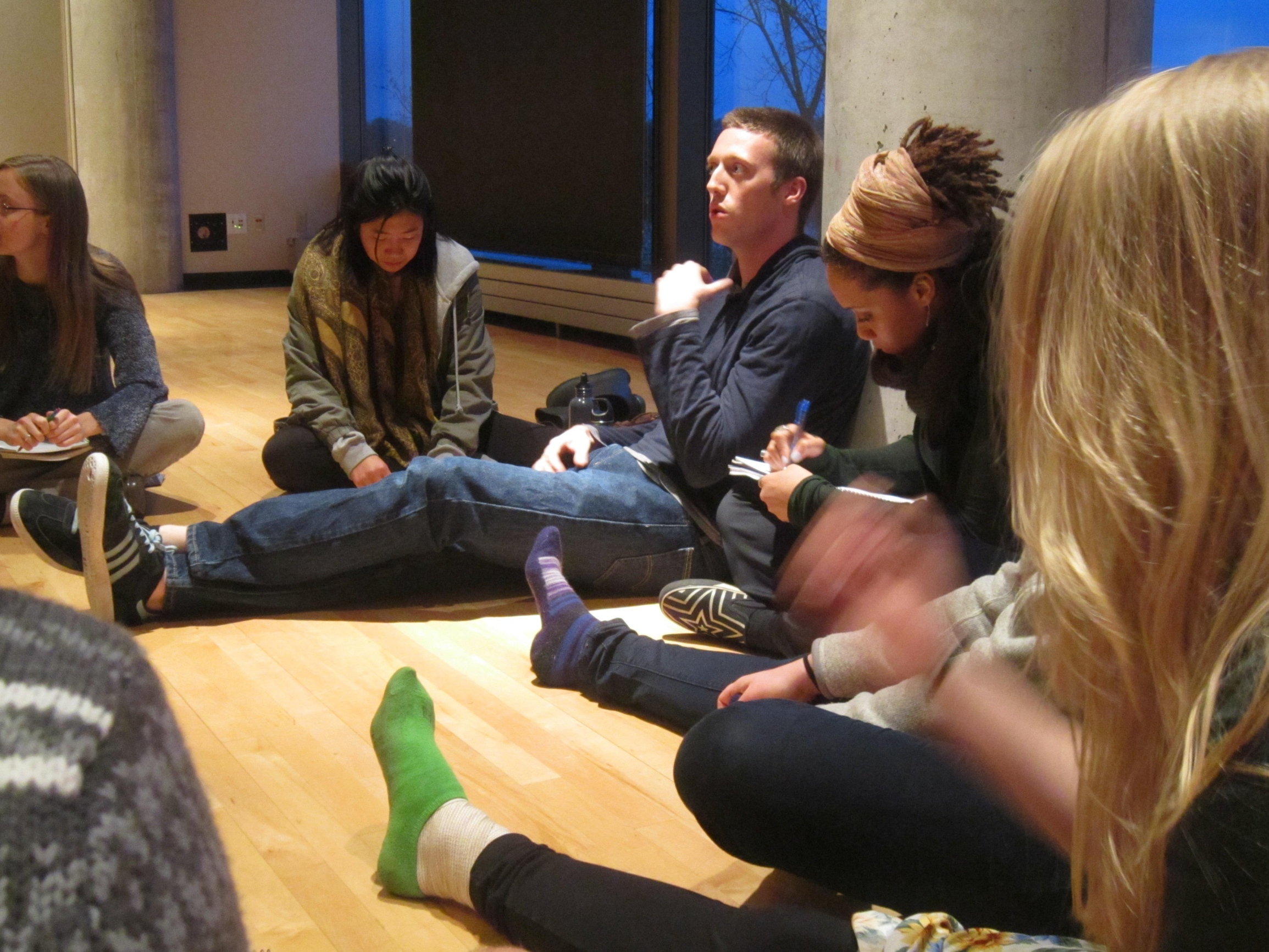 Lawrence’s new spoken word group had its first meeting last Thursday. Twenty people attended the meeting, with about half of them actually performing pieces. The meeting was part planning and organizing, but a much larger part was dedicated to an open mic, giving attendees the opportunity to share their material. If everything goes as planned, the Lawrence community should expect to hear a lot more from them as a group.

Spoken word refers to performed poetry, though it’s definitely not the kind of poetry students are typically used to reading in class. It is most commonly associated with slam poetry. Topics for readings are all over the place and can be anything from personal experiences like love and childhood to political and societal issues like equality, racial tension and homophobia; no topic is off limits. It’s also a highly interactive because so much of the effect relies on audience participation and feedback.

Brianna Schmidt, sophomore and spoken word enthusiast, explained, “Spoken word performances require a lot of practice. It needs to be in a very specific tone and there are certain ways you gesture to emphasize certain things. A lot of it also has to do with variation in intonation and talking speed. But with that said, we’ve also had students who finish a piece just before coming on stage and that can be really awesome too.”

Caleb Stellmach, junior and group organizer, added, “To me, it’s something that’s very personal and of course it’s performative too. It doesn’t have to be formal poetry or abstract. It’s about you and what you’re going through when you’re writing and that changes. It’s very organic. And it’s fun. You can do whatever you want. There are no rules.”

There are a lot of people on campus interested in spoken word, but up until now there was not an organized group devoted to bringing these people together. In the past year, interest has only continued to grow with open mic nights and visiting spoken word artists becoming an increasingly more common occurrence at Lawrence. Now students will have the opportunity to share their interest and passion with other students in a collaborative, supportive and close knit environment. The hope is that this new group will encourage even more people to get involved and express themselves by providing them with a new outlet.

For right now, the group’s main focus is getting their name out there on campus, so they continue to grow. They are also hoping to rally more campus support and interest in the upcoming weeks. As far as next year goes, there are a lot of tentative plans in the works including bringing more artists to campus and reaching out more to the Appleton community as well as potentially hosting an open slam contest at Lawrence. Whether or not these events actually happen depends in large part on campus interest.

When asked about the power of spoken word as a medium, Schmidt said, “Spoken word is something that touches me in a way that nothing else can. It’s more than an art — it’s reaching out to people, it’s stating your opinion, its garnering support for other issues. It’s entering a whole different world sometimes. It’s finding out that someone else feels the same way you do when you thought you were the only one. A good spoken word artist is someone who makes people feel.”

“I think it just gives you an outlet for that energy and a lot of those emotions,” said Stellmach. “For me, what we do at Lawrence, so much of it is homework. It’s so formal and academic. This is a really nice release to just be able to talk about anything you want and it doesn’t have to be a certain way. You can just express how you’re feeling. It’s really gratifying to get up in front of a group of people and tell them that this is how you feel and this is how you see the world; this is who I am. And even if they hate it, they’re going to clap at the end,” Stellmach added after reflecting on his own experience.

The spoken word group is open to anyone and everyone who has in interest in writing, reading or just listening to poetry; there’s no prior experience necessary. It’s a very informal environment and there’s no pressure to read even though sharing is encouraged.

Anyone who’s interested in seeing what this new group is all about firsthand should attend a meeting or contact Caleb Stellmach for more information. Meetings are every other Thursday at 7:30 p.m. in the Esch-Hurvis room of the Warch Campus Center. The next meeting will be held May 3. Everyone should also keep their eyes and ears open for news about more upcoming open mic nights and other spoken word events.