Around the world in eight issues: Wadi Rum, Jordan 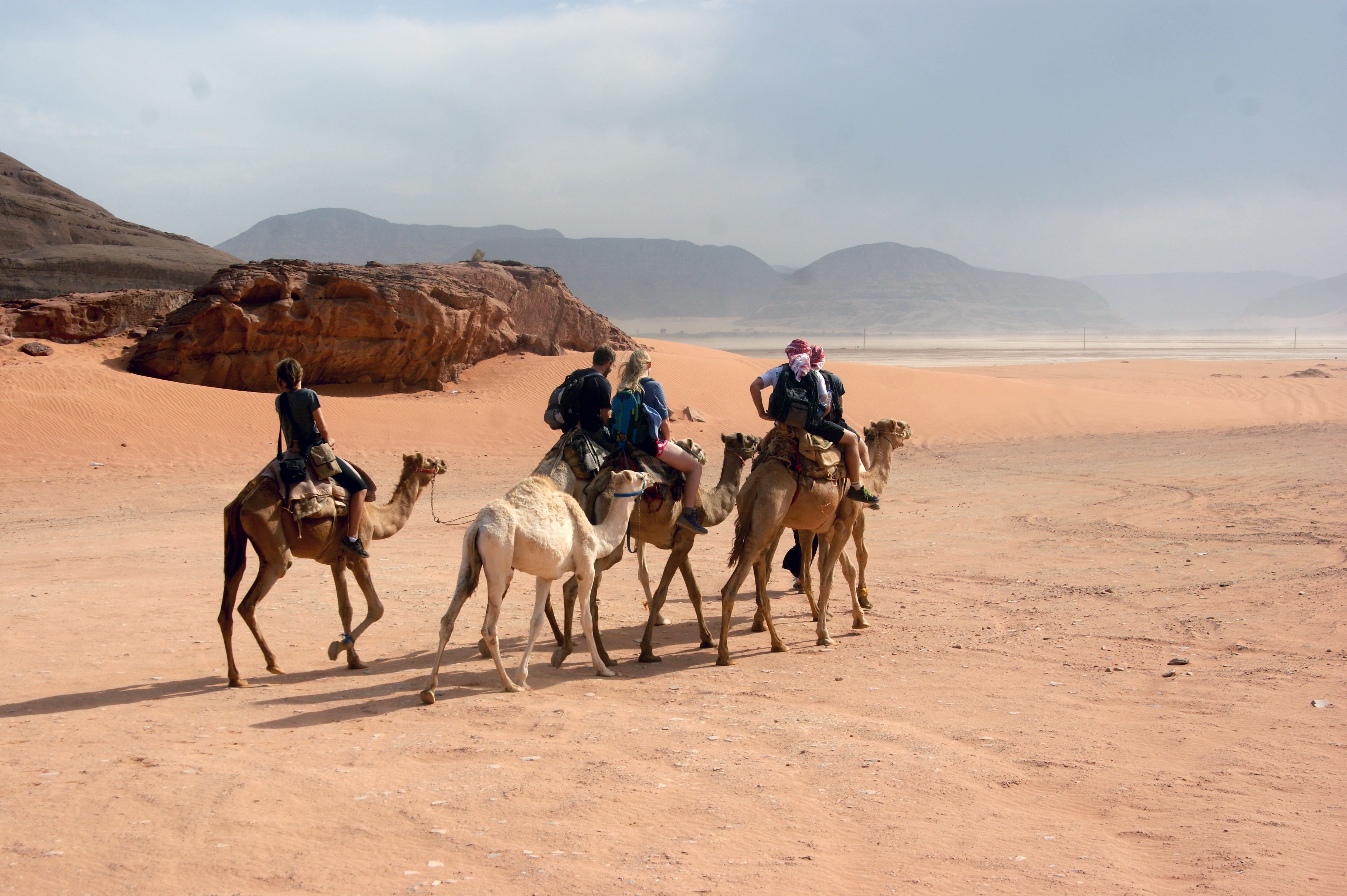 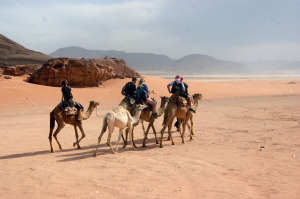 After a four-hour JETT bus ride and a 45 minute van ride, we arrived with our guide at a campsite in Wadi Rum at 10 p.m. Inside the camp, neon lights were flashing and popular music was blasting. We waited outside the entrance with our backpacks, slightly confused about where we were as several Bedouins greeted us and urged us to see our rooms.

One of the students in our group—there were five of us—was frustrated with our guide because we were not at the Green Desert campsite, as planned, which had high ratings and was in a protected area of Wadi Rum. After some debate, we decided to stay at the campsite we were dropped off at. The dinner was buffet style Bedouin dishes. Afterwards, we climbed up the nearby rocks and lay on our backs looking at the moon.

The first morning, we walked in the sand for several hours to get to our first site, the Seven Pillars. It was hot and our eyes were adjusting to the unearthly, unfamiliar landscape.

The terrain is comparable to the Hollywood version of other planets. The red rocks are massive and the desert extends in every direction. The site was actually used in the films “Prometheus” and “Transformers: Revenge of the Fallen.” A lot of the traveler demographic that passed us seemed like an older European crowd interested in a more rustic or historical vacation. They rode in jeeps and stopped at different sites to take pictures. Tents and rest stops were set up next to many sites that had historical significance to T.E. Lawrence and sold different products such as instruments or swords.

Our group and the guide that came with us were led by a younger Bedouin. Our guide wore military boots and the Bedouin wore flimsy looking flip flops. We spent the whole day walking, to the Seven Pillars in the morning and through Raqabat Canyon in the evening. Twice during the day, the father and brother of the Bedouin met us with their car. They prepared us lunch and tea that we enjoyed on a Bedouin rug under the shade. We returned back to the campsite by night and made a large campfire.

We started off the second day with a camel ride. Camels are very silly animals and their feet expand every time they touch the ground. We rode them, led by a guide, through the desert for an hour and a half and stopped at a site to get tea halfway through. After we left the camels, the Bedouin guides started taking us to our further-away destinations by car—a pick-up truck with two benches in the back. The car rides often involved screaming “Iohwa!” “Yallah” (Yes! Let’s go!) as many of us would stand up in the car or on the bumper as the driver sped through the sand.

In the afternoon, we scrambled—rock climbed and hiked—up Jabal Burda. Just after we reached Burda’s arch, it began to rain. It hadn’t rained since I came to Jordan in June and experiencing it in the desert was, for lack of a better word, magical. As we scrambled down the rocks to get back to the ground, we could see thunder in the distance and smell the zatar that grew on the rocks. We switched campsites in the afternoon—this one was much more peaceful and more in the heart of the desert.

We spent the last morning sand-boarding, which is going down sand dunes on a snowboard. Running and riding down sand dunes is incredibly exhilarating, but hiking up them is exhausting. When we left the desert in the afternoon, none of us felt ready to go back to Amman. We went to Aqaba to have dinner before our 6 p.m. bus. Two weeks after leaving, red sand is still falling out of my sneakers. I’m excited to return to Wadi Rum, as well as to visit Petra, in five days for an excursion with my study abroad program.