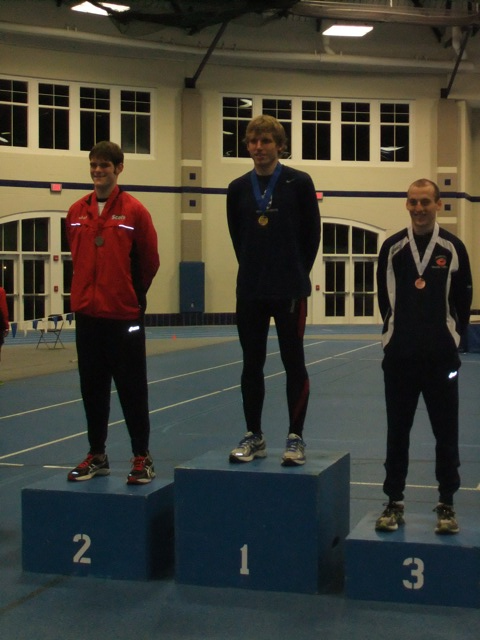 In what can be seen as an apt ending to a very successful indoor track season, the Vikings of Lawrence University returned Saturday night from the Midwest Athletic Conference Championship feeling both satisfied with their performance, but also wanting more. Boasting both a handful of stellar individual performances and a fantastic relay time, the Vikings represented their school well.

Claiming Lawrence’s only conference title with a personal record time of 15:21.93, junior standout Sam Stevens had an impressive finish in the 5,000 m, edging out the runner up by a mere second and a half. Stevens described the race as “more difficult that I expected,” but noted that his “close win was very rewarding.”

Stevens continued to reward the team with his performances as the anchor in the Distance Medley Relay and in the 3,000 m run. After two impressive runs, Stevens lost a little steam going into the 3,000 m and finished third overall with his time of 8:53. Despite this, Stevens contributed to 24 of the team’s 37 points and left with three new All-Conference awards, bringing his career total to five.

The distance medley relay, made up of senior Cam Blegen, sophomore Dan Thoresen, freshman Pat Mangan and Stevens cruised to a second place finish on Saturday. This is an improvement of over a second from last year’s third place finish. Stevens noted, “being able to take second place with my teammates in the DMR was an awesome feeling.”

The Viking men had some standout performances in the throwing events as well. Senior Nick Kerkman was able to nab a sixth place finish in the weight throw with his toss of 45 feet, 8 inches. Always looking to improve, he remarked, “I still was disappointed in myself for not being able to overcome my furthest weight throw of 14.44m and perhaps move up a place or two in the final results.”

On the women’s side, there were numerous stellar performances — notably, junior Rose Tepper’s second place finish in the high jump, freshman Anna Bolgrien’s third place finish in the 60 m hurdles, and a pair of personal bests recorded by senior Emily Muhs in the 5,000 m and 3,000 m runs.

Tepper’s third All-Conference award has solidified her as one of the best high jumpers in Lawrence history. Her jump of 5 feet, 2.25 inches last Friday was not enough to repeat her previous conference title in the event, but she was happy with the performance nonetheless.

Bolgrien’s personal best performance in the 60 m hurdles was good enough for an All-Conference third place finish. Her time of 9.56 was an improvement of almost a half second off last week’s performance. “I am really happy with how I ran this last weekend,” she remarked. “It was a really good meet not just for me but for the whole team.”

Overall, the team had a good weekend. Despite this being, as Kerkman noted, “a business trip,” the team was able to relax and enjoy themselves. Bolgrien noted, “Watching my teammates as they did their events was the highlight of the weekend.”

Several members of the team will compete in the Last Chance Meet this weekend, March 3, but the rest are enjoying a couple weeks off before the start of the outdoor season.