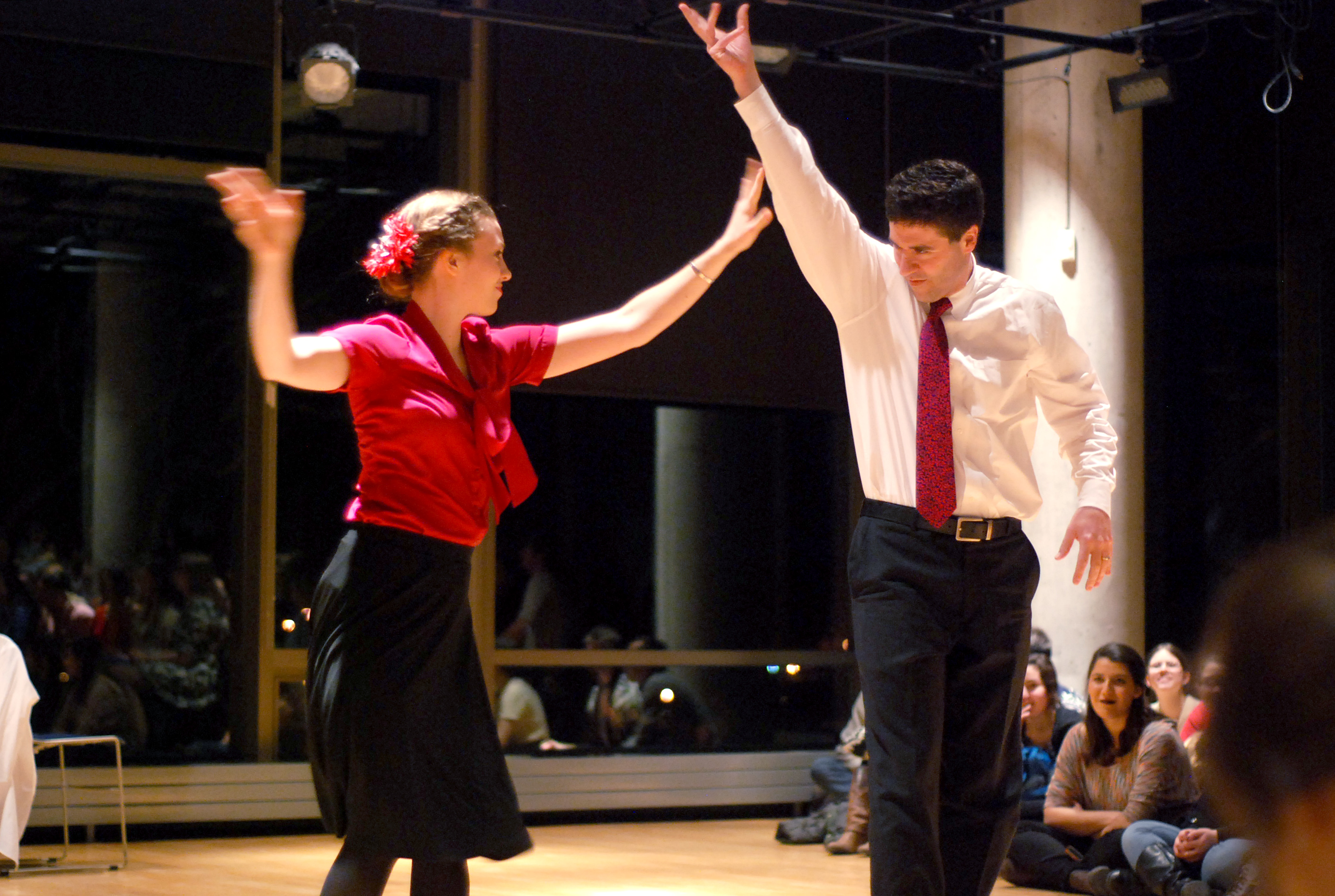 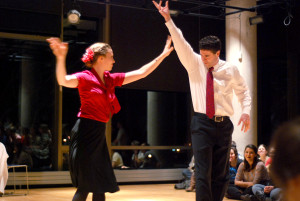 Students, staff, professors and their families took their seats around the dance floor and judging table in the Warch Campus Center’s Esch Studio on Friday, Jan. 30 for “Dancing With the Profs,”. The annual fundraiser is hosted by Lawrence Swing Dance (LSD).

In a twist on the reality show “Dancing with the Stars,” Lawrence professors learned a choreographed dance for a final judged performance.

Club members nominated professors to dance at this year’s show and then contacted them to see if they would participate before having Lawrence students vote for their favorites with their dollars.

The show raised $319.03 compared to last year’s $50. They raised $269 from tabling and $45 came from donations given at the event. The total donations went to the charity Heifer International in order to give livestock to families in need. Jindra says over the coming weeks, LSD will “specifically request that Heifer use the money that we raised to actually provide a family with some livestock,” such as goats, chickens or ducks.

President of Lawrence Swing Dance fifth year Philip Jindra explained, “We try to match the swing dancers up with professors that they know so they have kind of a more personal connection.” Jindra emceed and helped organize the event in addition to choreographing a dance.

Dances were tailored to the professors’ experience and tastes, and each one had elements of swing dance as well as other styles. The faculty and staff came in with a wide range of dance experience as well, from never having done swing dance before to having a theater background.

“It was very different from person to person…some learned the very basics just to kind of see what they can do, what they liked, what they were comfortable with,” said Jindra.

The song choices ranged from “September” by Earth, Wind and Fire to a song from Disney’s animated “Aladdin” movie. Jindra choreographed Dr. Sieck’s dance to Earth, Wind and Fire and had a specific plan from the beginning. Sieck and his partner learned the dance over the course of only three lessons.

Judges for the event were Professor of Music Donna Dibella who was a dancer in last year’s event, Swing Dance club advisor and the theater Technical Director Aaron Sherkow and Assistant Professor of Music Sonja Downing. They had front row seats and presented different awards for the dance pairs at the end of the night.

Every pair got an award, including “Most Energetic” for McQuinn’s fast-paced Charleston and “Crowd Favorite” for Sieck’s disco moves that especially amused the choir students in the audience.

At the end of the show, Jindra invited people to get on the dance floor while the judges decided on their awards. “It was just really cool to see all these people get up and start dancing even if they didn’t have experience,” said Jindra. “Not only is it an opportunity to get everyone dancing regardless of skill level and really get that participatory experience, but it also brings a lot of different communities together—professors, family members of professors, community members and students who just came to see their professors dance. All of a sudden, you’ve got this big mix of people all together at the same event that you don’t normally see.”

“One of the things that we really want to get across with ‘Dancing with the Profs’ is anyone can dance,” Jindra said.

Students, staff, professors and their families took their seats around the dance floor and judging table in the Warch Campus Center’s Esch Studio on Friday, Jan. 30 for “Dancing With the Profs,”. The annual fundraiser is hosted by Lawrence Swing Dance (LSD). In a twist on the reality show “Dancing with the Stars,” Lawrence professors…