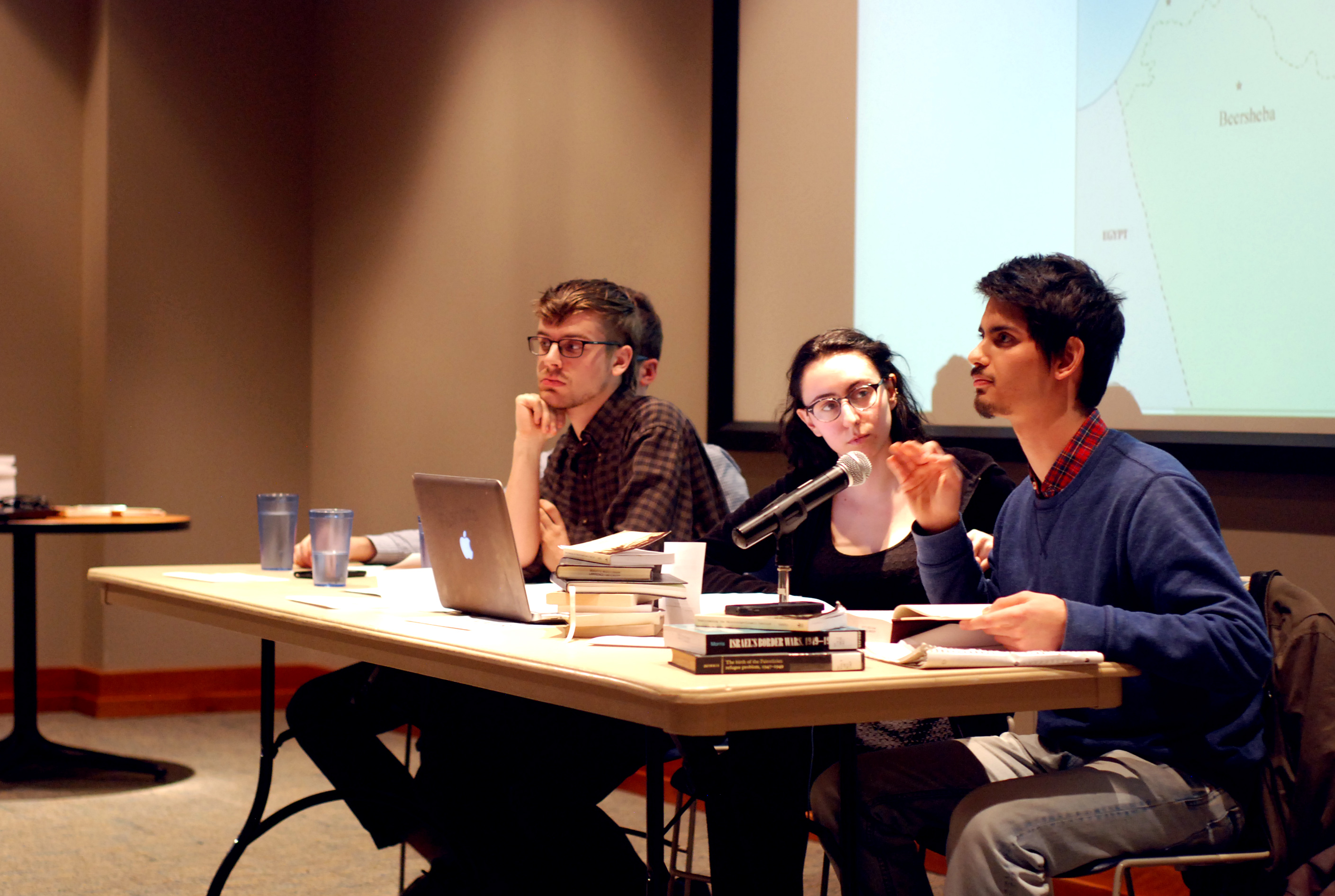 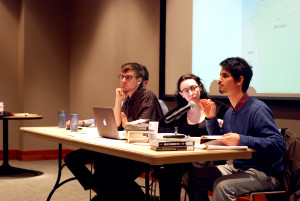 On Feb. 10, the cinema of the Warch Campus Center was full of people gathered to hear Students for Justice in Palestine’s (SJP) four-student panel on the “History of the Palestinian-Israeli Question,” covering history of the Israeli occupation of Palestine from the pre-Ottoman period through the summer 2014 Israel-Gaza conflict. The panel was followed by a question and answer session from the audience.

The panel addressed the audience with photos and videos to illustrate during the two-hour event. SJP member panelists were sophomore and SJP President Tamara Nassar, senior and vice president Eli Massey, junior and secretary Jake Valente and freshman Mahmoud Shaar.

Nassar said one of the motivations behind SJP as a whole is to educate. “What we are trying to do is provide an alternative source of information to the mainstream Western media, to the public opinion where the Palestinian narrative is overshadowed. This is what we can do.”

“The number one thing we’re trying to do, especially in the United States and on this campus especially is to raise awareness,” said Nassar. “I’m not here to convince you of anything, I’m not here to say you’re wrong, I’m just here to lay out simple facts and you take these facts home and do what you will with them.”

“This is not about one side versus the other,” said Massey. “I’m not pro-Palestinian, I’m not Pro-Israeli. I’m pro-facts, I’m pro-history. We are in favor of justice.”

Nassar started out by giving a history of the area of Palestine from the Ottoman period, the 1948 Arab-Israeli war and the 1967 Six-Day war. The 1948 war is known in Arabic as Al-Nakba (The Catastrophe), referring to the systematic exodus of Palestinians from their homeland after the UN Resolution to partition Palestine for the creation of an independent Jewish nation.

Nassar shared that her own family was one of those forced from their homes in 1948 to relocate in Jordan. They returned in the 1970s later to find an Israeli family living in their home. They shared coffee with the family and returned to Jordan. “This was the reality of it and this was the case of all Palestinian refugees. They were never granted the right to return,” said Nassar.

She explained that Israel occupied Palestinian territories after the Six Day War to the 1967 borders. Israel has never defined their boundaries. The boundaries continued to shift, allowing for their continuous occupation.

Next, Shaar covered the context and history of the first and second intifadas (in Arabic “the shaking off”), in 1987 and 2000. These were Palestinian uprisings involving violence against the Israeli occupation of Palestinian territories.

Valente then described the history and what life is like behind the Israeli West Bank Barrier built in 2002. He went on to describe the effects of the wall on civilians’ access to their homes, land and adequate water and food controlled by Israel. He also went on to describe the impact of the Israeli Defense Forces (IDF) and the severe negative impact of the segregated road system and checkpoints in Gaza controlled by Israel. Massey chimed in to talk about how Palestinians are also frequently detained without due process by the IDF.

Massey addressed the context of recent events from the Second Intifada in 2000, Operation Defensive Edge, to the 2014 Israel-Gaza conflict and the ensuing deaths of Israeli and Palestinian civilians. Massey concluded by saying that the only way to achieve lasting peace and justice is to end the occupation.

During the question and answer session, many students asked for clarification of events and actions. The discussion did get heated with members of the audience questioning the bias of the history provided by SJP.

When a student asked about what American students can do, Nassar replied, saying students should read, look at the news and think critically. “We should think about this.” she said.

She also emphasized having conversations about the topic with others to raise awareness. “Raising awareness is one of the most important things we can do. It can be underestimated, but it should not be.”

Attendee and junior Tony Smith said, “I think my biggest issue with it was the one-sided telling of the facts,” said Smith. “They made it seem like European Jews were coming in and colonizing Palestine, but this is not necessarily true, because they were refugees, not settlers. They completely ignored the fact that the Jewish people didn’t have anywhere else to go.”

Junior Zach Ben-Amots attended the panel and asked a few questions. “What stuck out to me is that Tamara did a wonderful job of leading this panel. She seems to be someone who is very valuable in this discussion, and I appreciate her focus on the issue of the occupation,” said Ben-Amots. “As a pro-Palestinian panel, it was very effective in accomplishing its goals, but as a panel which presented itself as an objective presentation of the Palestinian-Israeli question, it was completely ineffective.”

There was also controversy about SJP not including another person on the panel who had a different perspective on the subject. Nassar stated such a student had been invited, but declined to participate.

“Next time, I would hope that they make it more of a discussion and that they didn’t try to do so by asking another member of their own organization to join the panel,” said Ben-Amots, “but by specifically reaching out to those with opposing beliefs on the cause.”

“I was there not as a member of Hillel but just as a concerned Jewish student,” said senior Ilana Goldman. “Hillel has also been on this campus as a religious and cultural group, not as a political one.”

Nassar also addressed the alleged bias of the panel towards Palestinians.

“We are here to represent an underrepresented group, the Palestinian group. Civilian lives on both sides are equal and the same, and we are for civilian lives all the same. We are pro-justice, we are against the occupation, and we are not against Israel,” said Nassar. “We might seem like we are representing Palestinians especially, but we are representing the history, and this is exactly what the history looks like. The Palestinian narrative is under-represented; this is why Students for Justice in Palestine exists.”

Ben-Amots expressed his hopes for future discussions as well. “I think that anyone invested in this cause is equally disgusted with the inhumane treatment of Palestinians throughout the Palestinian territories,” he said. “I think that when we start the discussion there and then move to discussing which techniques can be employed that would not be detrimental to the state of Israel or the state of Palestine, then we can have a really effective discussion.”

On Feb. 10, the cinema of the Warch Campus Center was full of people gathered to hear Students for Justice in Palestine’s (SJP) four-student panel on the “History of the Palestinian-Israeli Question,” covering history of the Israeli occupation of Palestine from the pre-Ottoman period through the summer 2014 Israel-Gaza conflict. The panel was followed by…