Earth Day at Lawrence 75 years ago 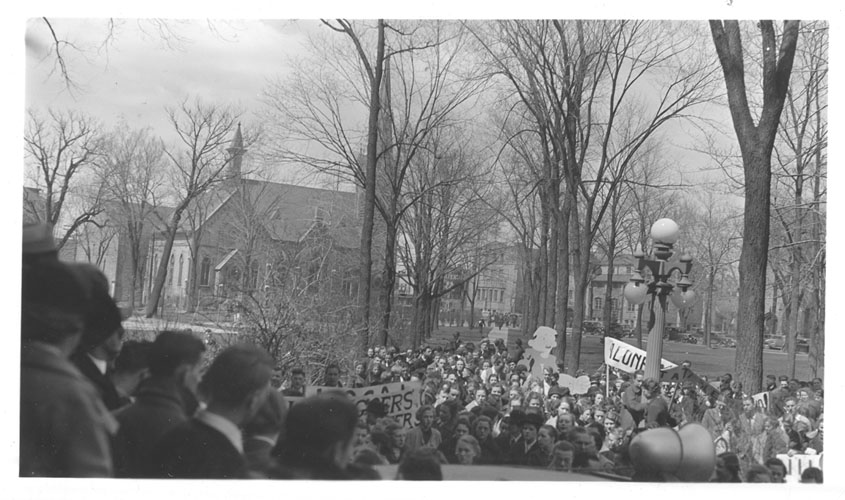 From film screenings in the cinema to the lecture by film director Chris Paine, Earth Week is a time for Lawrentians to show support for pressing environmental issues. This year, the Lawrence community was able to do this through their participation in various programs by student organizations such as SLUG and Greenfire.

Many students and community members gathered in the Warch Campus Center to celebrate Earth Day April 23. Marking Greenfire’s 21st Earth Day, volunteering, crafts and other opportunities were made available at the event to encourage awareness about the environment.

What many Lawrentians do not know, however, is that April 22 is an important date in Lawrence history for more than one reason. In addition to being Earth Day, it is the anniversary of Lawrence University’s 1936 peace parade. On April 22 75 years ago, 400 Lawrence students marched down College Avenue to voice their anti-war concerns.

At the time, 700 students were enrolled at Lawrence, meaning that more than half of the student population took part in the parade. Lawrentians marched alongside students from other colleges throughout the country, many of which were involved with anti-war mock organizations such as “Veterans of Future Wars” and the “Association of Gold Star Mothers of Veterans of Future Wars.”

Taking place in an era where student protests were uncommon, the peace parade faced a great deal of opposition from the Appleton Police Department. Although the student organizers of the march initially received permission for the event, the police chief later asserted that participators could not continue the march off campus. Even so, a few marched on past the corner of College Avenue and Drew Street.

Former Lawrence University President Henry Wriston, along with the faculty, and the Board of Trustees at the time, agreed that the treatment of students by Appleton Police during the Peace Parade was “grossly provocative.” In an April 24, 1936 issue of The Lawrentian, the forceful reactions of the Appleton Police Department are described.

The article reads, “[The] Appleton police climaxed the Lawrence Veterans of Future Wars Peace demonstration when an officer seized Albert Haak, former Wauwatosa High football player, by the shoulder and clubbed him on the head. Students rushed to the aid of Haak, who collapsed as he was knocked out…The strong arm of the Appleton law left its mark on at least four students and the minds of the faculty and townspeople as the police force bore down on the order prohibiting a downtown parade of the local Viking Post, No. 815, Veterans of Future Wars.”

The article also comments on the impact of the Peace Parade on students against war around the nation. It mentions students “huddled around radios…to hear the account of the student strike against war at Yale, Harvard, Princeton, and ‘small Lawrence College’ in Appleton.”

Comparing Lawrentians 75 years ago during the Peace Parade to all the student-run programming this past week for Earth Week, it is evident that Lawrence holds a long tradition of meaningful involvement. Lawrence students have displayed a strong sense of support and advocacy in larger movements throughout the nation and world, uniting to make measurable and important differences.