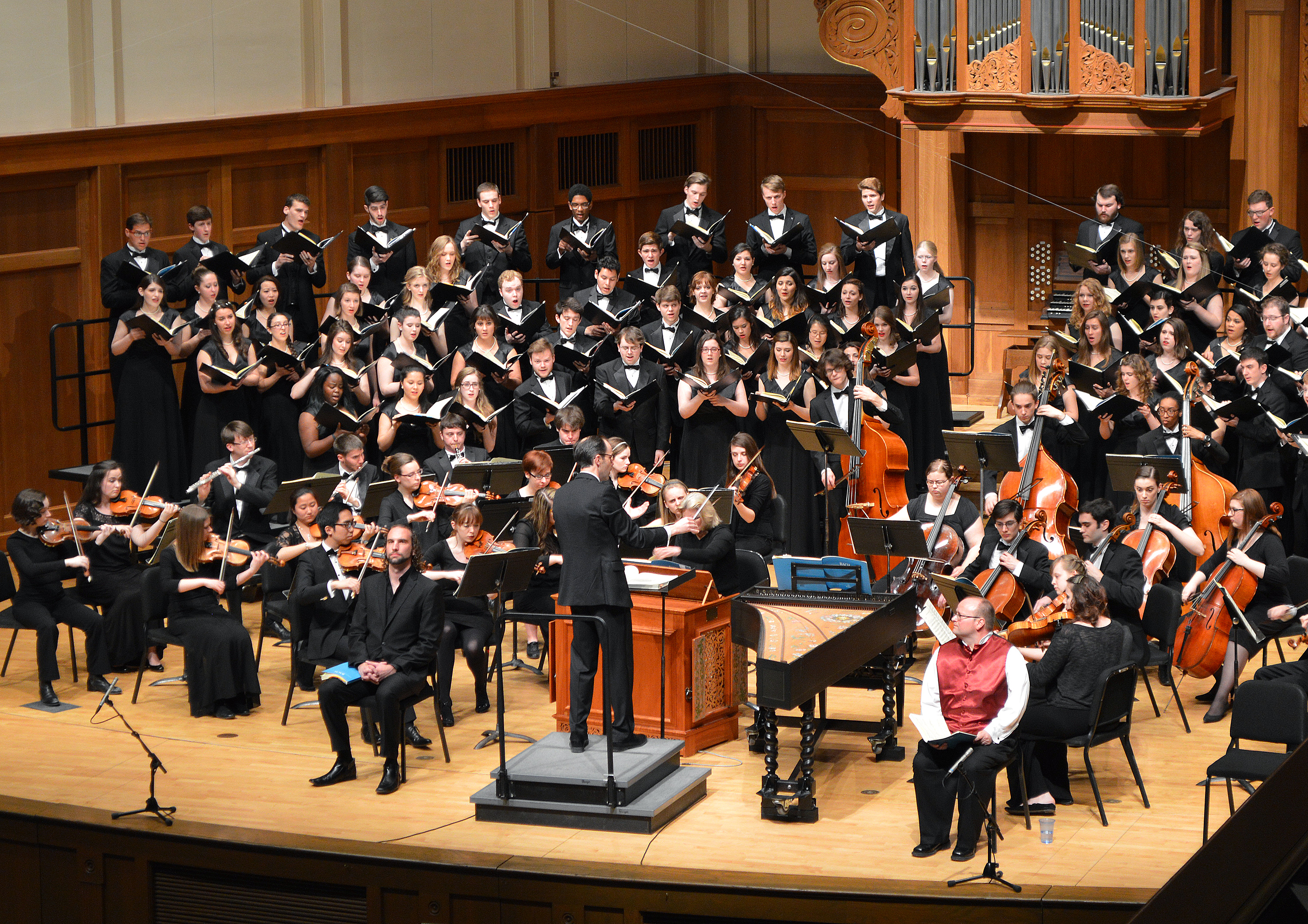 The Lawrence Memorial Chapel was full of performers and audience members alike eagerly awaiting the beginning of the concert. The program on Friday, April 24, was comprised of Johann Sebastian Bach’s “Johannes-Passion,” otherwise known as “St. John’s Passion.”

Without introduction or informative asides interspersed throughout the work, the conductor and the soloists took the stage and “St. John’s Passion” began. The piece consisted of mighty choruses and chorales, intimate recitatives, and courageous solo arias and ariosos. This mix of almost conversational and poetic musical elements lent itself to the oratorio nature of the work. The arc of “St. John’s Passion” is meant to narrate the Passion of Jesus Christ through the Gospel of John.

This monumental work involved the performances of over 30 instrumentalists and 150 vocalists. The concert was conducted by Co-Director of Choirs and Assistant Professor of Music Stephen Sieck. The vital solo work of Kathrine Handford on continuo organ and harpsichord, as well as Associate of Music Professor Matthew Michelic on viola, was also featured. In short, the behemoth that is “St. John’s Passion” required several Lawrence faculty members and a great deal of current Lawrence students to achieve the power this piece deserves.

In addition to the large number of participants in this choral and orchestral work, the duration of the piece leaves quite an impression: this performance of “St. John’s Passion” necessitated roughly two hours of constant poise, emotion and focus from all performers involved.

The fact that this monumental piece relied exclusively on the work of a Lawrence-based artistic presence was a point of pride. “St. John’s Passion” is a work that requires commitment as well as musical talent from a variety of departments in the conservatory.

Some might wonder about the role of studying and performing religious pieces in schools that are religiously unaffiliated. This question was addressed in the program notes: “The “Johannes-Passion” is a religious work meant for a congregational service, yet Lawrence is not a religious institution.”

“There is always the room for tonight’s performance to be a spiritually rich experience for those who follow the Christian faith, but it is not a requirement for a catharsis tonight. What we need, then, for a deeply meaningful and ecumenical experience, are more ways to access this story,” the notes continued.

The program notes detailed the “intellectual inquiry and historical perspective” taken into account when learning about “St. John’s Passion.” Given that this biblical story deals with the interrogation of leadership, the questions of judgment, punishment and retribution, and the struggle for power between different groups, I found the following program note particularly illuminating: “It takes an act of mental separation for us to see other people as ‘other.’”

Immediately following this explanation of what occurs for a distinction between self and other to emerge, the program notes elaborated with a compelling analysis of why mistreatment and destruction happen. It was suggested, “We cannot hurt, degrade or abuse unless and until we willfully ignore the humanity and dignity of another person.”

Without theological agenda, the choirs, orchestra and soloists performed a moving concert. This work, written centuries ago and performed as it was written — in German — managed to transcend language, time and religious denomination to create a feeling of might and a sense of meaning.

After all of the attention to detail that went into the concert performance that night — and the undoubtedly extensive rehearsals it took to piece it all together beforehand — the choirs and orchestra received a well-deserved standing ovation.