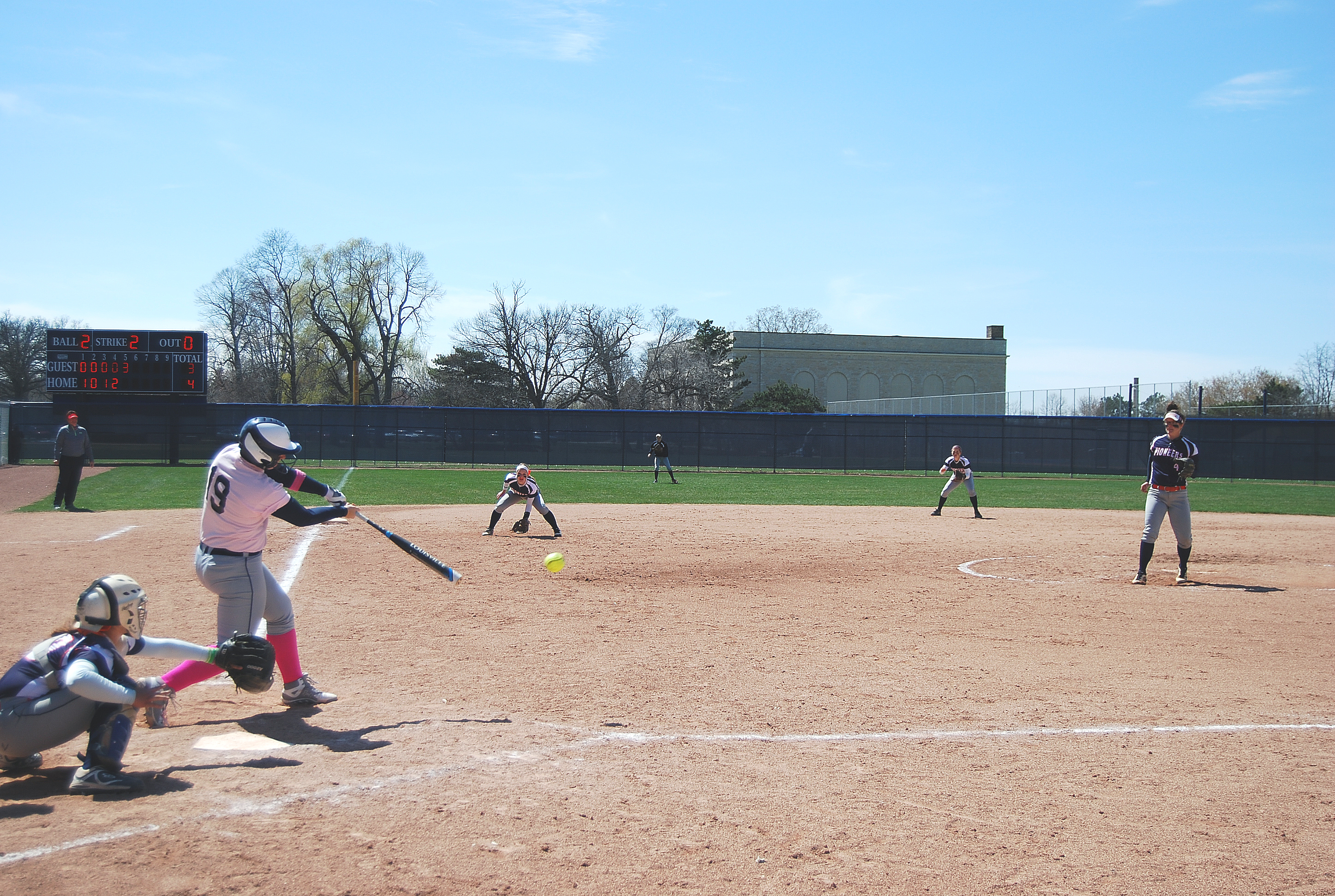 Last weekend was full of triumph for the Lawrence University Softball team, as the Lady Vikes claimed the Midwest Conference (MWC) North Division title and added three wins to their 26-10, 10-4 MWC record. The celebration didn’t last too long, however, as the Vikings are already looking ahead to this weekend’s MWC Championship tournament. Clinching the top spot for the North Division also earned Lawrence the privilege of hosting the tournament, and all competitions will take place at Whiting Field.

On Saturday, April 25, Carroll University (21-15, 9-5 MWC) came to Lawrence to challenge the Vikings in the last conference matchup of the regular season. The tough opener went to Carroll, who bested the Vikings 9-8. “We were down by one going into extra innings and we didn’t give up,” commented senior Katie Schumacher. “We never give up when we’re down.”

Despite falling in the opener, the characteristic Viking resilience won out in the nightcap, which Lawrence won 7-3. “We had to win that one to host the tournament,” said junior Savanna Marsicek of the high-stakes second game Saturday. “We’re here as a team and we have to play for each other to be successful. That was the theme going into the second game. We wanted it for each other.”

The following day, the Vikings hosted Rockford University in one last non-conference doubleheader to round out the regular season. Staying true to the success of the rest of the season, the Lady Vikes swept the Regents, taking the opener 4-3 and dominating the nightcap 9-1.

Looking back on the 2015 season, the team dynamic has made all the difference when it comes to getting results. “Our team chemistry is a lot better than it has been,” said Schumacher. “Energy all around was high all day Saturday, and it was great to achieve what we set out to.”

“We make it a point to play for each other,” added Marsicek.. In the first round of this weekend’s conference tournament, the Vikings will face Cornell College (30-6, 12-3 MWC), a big rival for several years. “We haven’t beaten Cornell since my class has been here. Our whole team wants them. Last time we played them, they beat us 9-1. They don’t respect us and we want to hand it to them,” said Marsicek.

The double elimination tournament will pit the top seed from each division against the second team in the opposite division in the first round. Lawrence and Carroll will represent the North Division while Lake Forest College (28-6, 13-2 MWC) and Cornell will come from the South Division.

“The game against Lake Forest was definitely a highlight of the season,” said Schumacher, reflecting on an exciting competition against the Foresters back at the MWC Classic.

“Our game had to end for the other games to start, so the whole conference was sitting there watching our game,” explained Marsicek. “They were all cheering for us. Beating Lake Forest is a big deal. We gave them their first conference loss of the season. Everyone wanted us to beat them.”

Before getting a chance to play the Foresters again, the Vikings need to beat Cornell, and Lake Forest would need to trump Carroll. Marsicek and Schumacher didn’t have much to say about a potential championship matchup. “It’s one game at a time,” said Marsicek with a smile. “It’s all about the game against Cornell. That’s the team we want.”

The MWC Championship tournament starts on Friday, May 1. Carroll and Lake Forest will face off at 10 a.m. at Whiting Field, and Lawrence will take on Cornell at 12 p.m. Subsequent games will take place at 2 p.m. and 4 p.m. before day one’s conclusion.