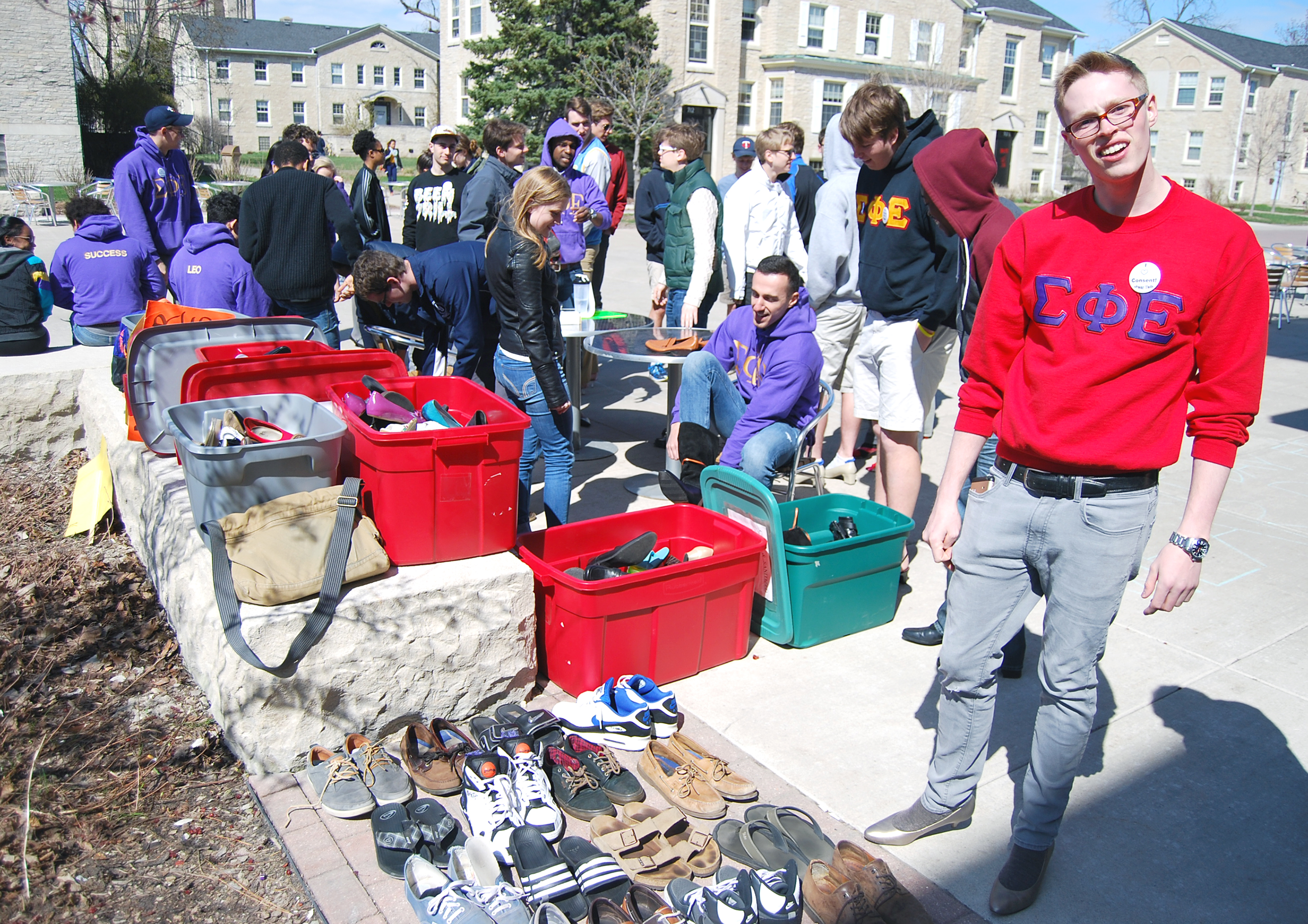 Sigma Phi Epsilon (SigEp) hosted the campus wide event “Walk a Mile in Her Shoes,” to bring awareness to sexual assault and violence on Saturday, April 25. Participants in high-heels began the walk at the Warch Campus Center at 3 p.m.

SigEp Vice-President of Philanthropy and sophomore Max Loebl said he and Sig Ep Vice-President of Programming and junior Daniel Card got the idea for the event upon learning that a Walk A Mile In Her Shoes event was hosted by Career Services and the Sexual Assault Crisis Center-Fox Cities at Lawrence in 2011. SigEp contacted the organizations and used the boxes of high-heels they used during the previous event.

SigEp also worked with on-campus resources, including Counseling Services and the peer talk program. They prepared a table with buttons advocating consent and an activity for participants to give their definition of consent. Counseling Services student intern and junior Gintu Kottarathil explained, “with our partnership, [we created] these buttons just to spread more awareness and for a lasting impression.” The participants’ definitions of consent will be used to make a poster to remind students of the meaning and importance of consent.

The event began with an address by SigEp President and junior Vahak Mouradian. Mouradian stressed how members of college campuses have a responsibility to address sexual assault and gender violence. He also emphasized the duty of Greek organizations to recognize the stigma of the issue in their history. In addition, junior and chair of the Student Alliance Against Sexual Harassment and Assault (SAASHA) Hannah Shryer thanked the attendees for their support.

The walk began on the Hurvis Crossing, and continued past the Buchanan Kiewit Wellness Center and Hiett Hall. From there, the route proceeded to College Avenue, then to Meade Street and ended back at the Warch Campus Center. Along the route, walkers picked up pre-placed signs saying “Good Men X-ing” to carry along the way.

Most of the walkers, including the men, wore high-heels provided at the starting line. Walking in heels was meant to draw attention to the event as well being a literal reference to the title of the event, “Walk a Mile in Her Shoes”. When asked about the difficulty of walking in heels, SigEp member and sophomore Tony Harth replied, “My calves hurt a little bit and I feel it in my heels a little, but I’ll make it.”

Many of the walkers were from SigEp and other Greek organizations, including sororities. Member of Delta Gamma and sophomore Ellie Coale said the sorority wanted to show their support for their fellow Greek organization’s event.

In addition to raising funds for Harbor House, the walk drew attention to the issue of sexual assault and violence on campus. Coale said, “What I hope is that it will start a conversation … and people thinking about it and how to stop it.”