The Making of a Quartet 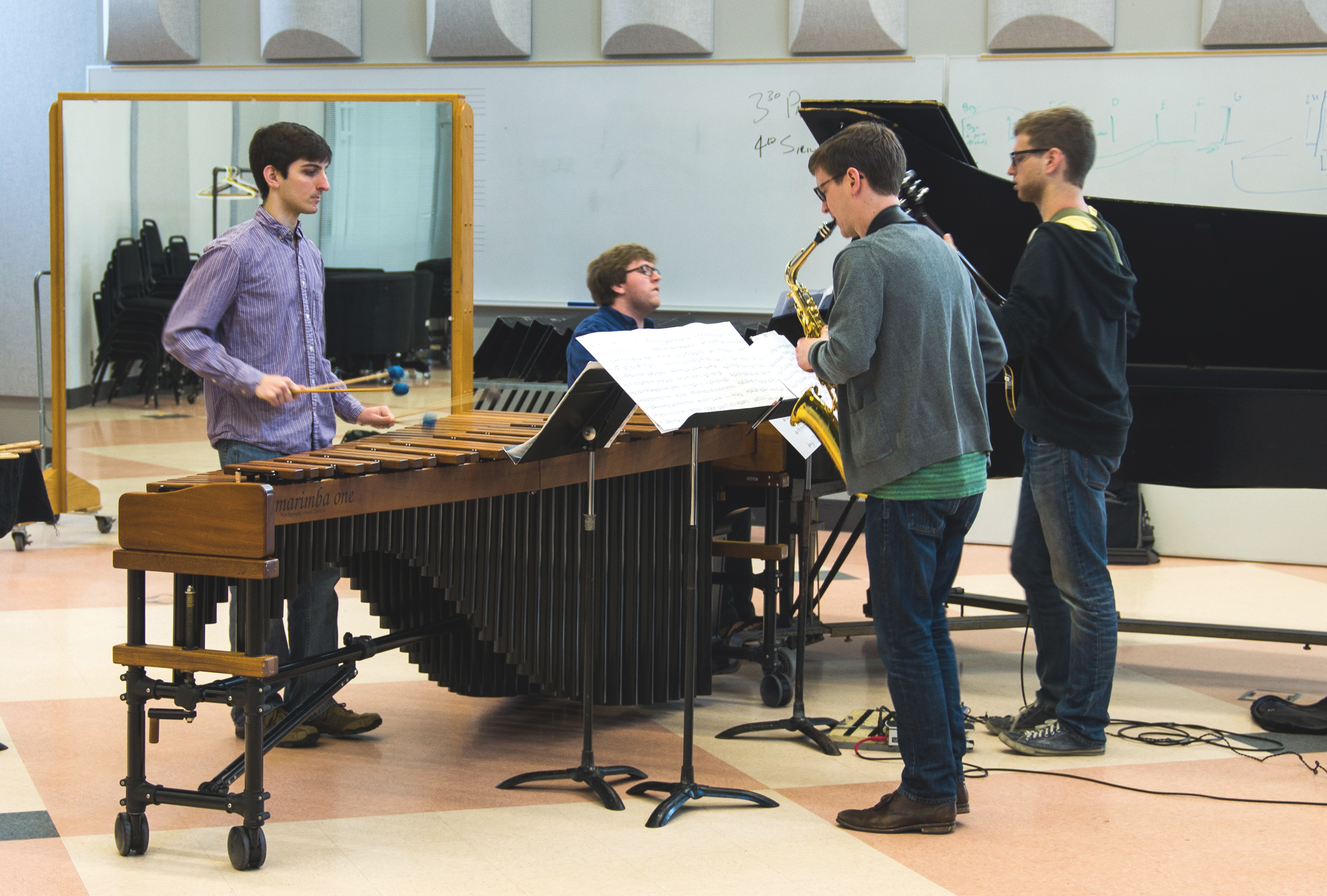 “Because we’re in the Midwest.”

They laughed, then lapsed into silence as they stared at all the names they had crossed out.

As the quartet’s coach and Professor of Music Steven Jordheim put it, a group’s name “needs to communicate something meaningful about the aesthetic aims of the musicians as well as the music that the group creates and performs. In addition, it must capture the imagination of the audience.”

With such high stakes, a group might be worried that they could not come up with a name. Especially because at the time we spoke, they were just under two weeks away from Connor’s senior recital during which they will perform the world premieres of two pieces they commissioned using a Mellon Senior Experience grant.

The two pieces are “Light and Shade” by David Werfelmann, an alumnus who taught composition at Lawrence last Fall and Winter Terms, and “Slipstream” by John Mayrose, a professor of music at University of Wisconsin-Oshkosh.

When we spoke, the members were calm. They pushed the list of rejected names away and laughingly agreed with Reifsteck when he suggested they just needed to have a fight to settle the matter.

The name will come, they knew, because their strengths as a group include three vital ones.

The first strength is that they are well prepared. They have rehearsed 14 hours over three days during spring break and about eight hours a week otherwise, and it shows. They cite measure numbers to each other by memory.

Blair says their rehearsals are most effective when they “work in really microscopic chunks, then go out to a broader picture and then back in. We’re very goal-oriented.”

Being democratic helps too. When two people have conflicting ideas, “before we make a judgment about either one of them, we just try them, and it’s usually clear which we prefer,” Connor said.

Blanck agrees that they have “done a good job in that no one seems to have more say or sway than other people.”

Their rehearsal technique has paid off. Mayrose said he “couldn’t be more pleased” with their work on “Slipstream,” and Jordheim agrees the group has made “remarkable progress in each rehearsal and coaching session.”

The second thing the group has going for them: they love the music they are working on.

As the title suggests, Werfelmann’s “Light and Shade” plays with contrasts. It opens with the guitar and piano playing quietly in unison, moving in the middle to loud, rhythmically challenging passages before ending with more high, delicate material.

Werfelmann takes advantage of the instrumentation — a mix of electric and acoustic instruments, plucked and struck strings, and woodwind and percussion.

“The opening has one of my favorite sounds in the piece,” Connor said. “The guitar and piano playing this really high crystalline note. It’s just so bright and I think the ‘light’ really makes a lot of sense.”

“One thing [Werfelmann] brought up a lot in our lessons was that unity in content really matters to him. And I think that comes through clearly in this piece. All sorts of ideas relate back to other ideas in lots of different ways,” Blanck said.

“It’s really funny how similar the pieces are in a broad arc,” Blair said, pointing out that both pieces begin the way they end with a contrasting middle section in between. Stylistically, where “Light and Shade” sings, “Slipstream” rocks.

“It just grooves the entire time,” Reifsteck said. “It drives.”

Both pieces have presented challenges in rehearsals.

“Probably for all of us,” Blair said, “there are times when we’re practicing the music or we’re in rehearsal where it’s like, what am I doing? Why am I here? Remembering that it’s incredible music and it’s fun to play helps. I feel really fortunate to play in this group.”

This leads to the quartet’s third strength: these guys like each other.

This was obvious in the rehearsal I observed, which stayed focused and light for two hours despite technical difficulties, a rapidly approaching concert and the presence of a silent, scrutinizing reporter.

The idea of forming the ensemble first occurred to Connor and Blanck last summer over dinner. A Facebook message to Blair, an email to Reifsteck and the group was born.

Though the guys are reluctant to put too fine a point on their goals, they agree they can see the group continuing professionally. If — when — they do, their experience commissioning, performing and recording “Slipstream” and “Light and Shade” will be invaluable.

“It’s like intro to being a professional musician,” Connor said. “It’s the full scope of the activities we’ll have to do. Premiering, collaborating, building an audience, building a repertoire, establishing all of the social media and website, getting our name out there – ”

“Getting a name,” Blank interjects.

The guys laugh. They knew a name would come. The music already has.

In addition to performing on Connor’s recital Saturday, May 2, the group will also perform on Reifsteck’s recital on Monday, May 25. The Quartet’s own recital will be on Saturday, June 6.