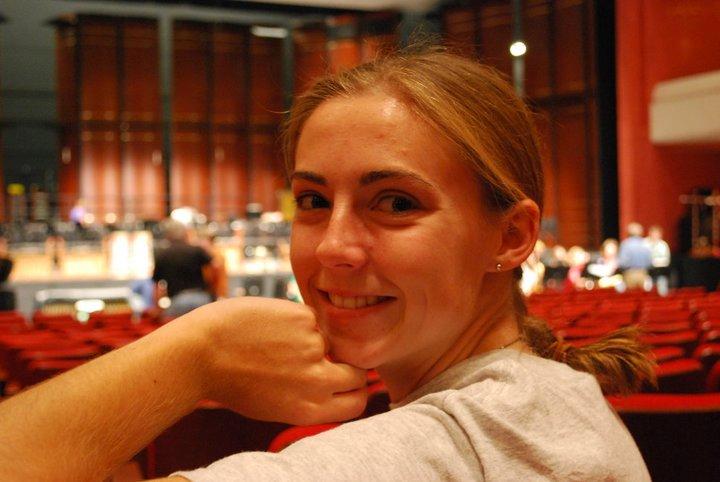 Senior Emily Cook is a double major in clarinet performance and music education, and most of her days are filled to the brim with music. A dedicated student, she spends on average seven hours a day playing clarinet, both in personal practice and in rehearsals.

She performs with the Lawrence Symphony Orchestra and Wind Ensemble, as well as three student groups, a wind quintet, a trio and a sextet.

She says, “I love playing in the large ensembles, but chamber music is by far my favorite thing to do.”

She rehearses with her quintet four times a week and is preparing a recital with them of twentieth century American wind quintet music.

Originally from Mendon, Ill., she started playing piano in second grade and then clarinet in fifth grade. She had wanted to play the Oboe since she could then play the English horn, which she thought “was just the most beautiful thing in the world.”

But after playing clarinet in middle school, she wasn’t about to switch. She played in band and marching band all through high school, and was attracted to Lawrence because of the many opportunities the conservatory provided.

She says, “Even though the Con is a bit smaller than some other music schools, the fact that we have things like the Gamelan, that there’s so much you can do with ethnomusicology or with baroque music and just all the different things that the Con offers, makes it so that pretty much anybody can get involved.”

With her recital coming up on Oct. 27, Cook has been busily preparing. For her recital she will be playing a piece by her “absolute favorite composer” Béla Bartók. When asked why Bartók was her favorite, she answered, “Bartók is one of those composers I can listen to over and over again, and I just hear more stuff every time.”

She programmed Bartók’s “Contrast” because it is the only piece he wrote that features the clarinet and isn’t for full orchestra. She also will be performing “Press Release” by composer David Lang for solo bass clarinet, “Four Pieces” by Alban Berg, which according to Cook is “scary sounding, but cool” and “Le Tombeau De Ravel” by Arthur Benjamin: “cool waltzes in whole tone scales.”

As comes with any double major, Cook is very busy, but when she is not in the practice room or rehearsing, she enjoys reading and writing poetry, though she won’t let you read any of her own work. Some of her favorite poets are Pablo Neruda, Octavio Paz, and Latin American poets in general.

Cook also considers herself a “Trekkie”: Her favorite series is “The Next Generation,” and if she had to choose a season it would be three or four. She loves spending time outdoors running, biking and hiking; she has done several trips with the Outdoor Recreation Club here at Lawrence. Cook also won the Freshman Studies essay contest in 2009 for her essay on Borges titled “Borges’s Real Concern.”

In February, Cook will start student teaching through the Chicago program at Whitney M. Young Magnet High School. She remarked, “Whatever you could want, they probably do a pretty good job of it there.” Their top ensemble will be going to Carnegie Hall at the end of February, and she is excited to be able to accompany them.

Her career dreams would be to find a way to incorporate playing professionally and teaching. However, she is focusing on performance right now. After Lawrence, Cook plans to attend graduate school in clarinet performance. Her top choice is Rice University in Houston, Texas, but she is also considering University of Colorado-Boulder and the Peabody Institute.

At some point before or after grad school, Cook would like to move to India to study traditional Indian clarinet. She says since she took a class on the music of India and the Middle East, she has been very interested in the clarinet tradition in India. She joked, “If anyone has a good way to get to India or Turkey to study clarinet there, tell them to call me up.”