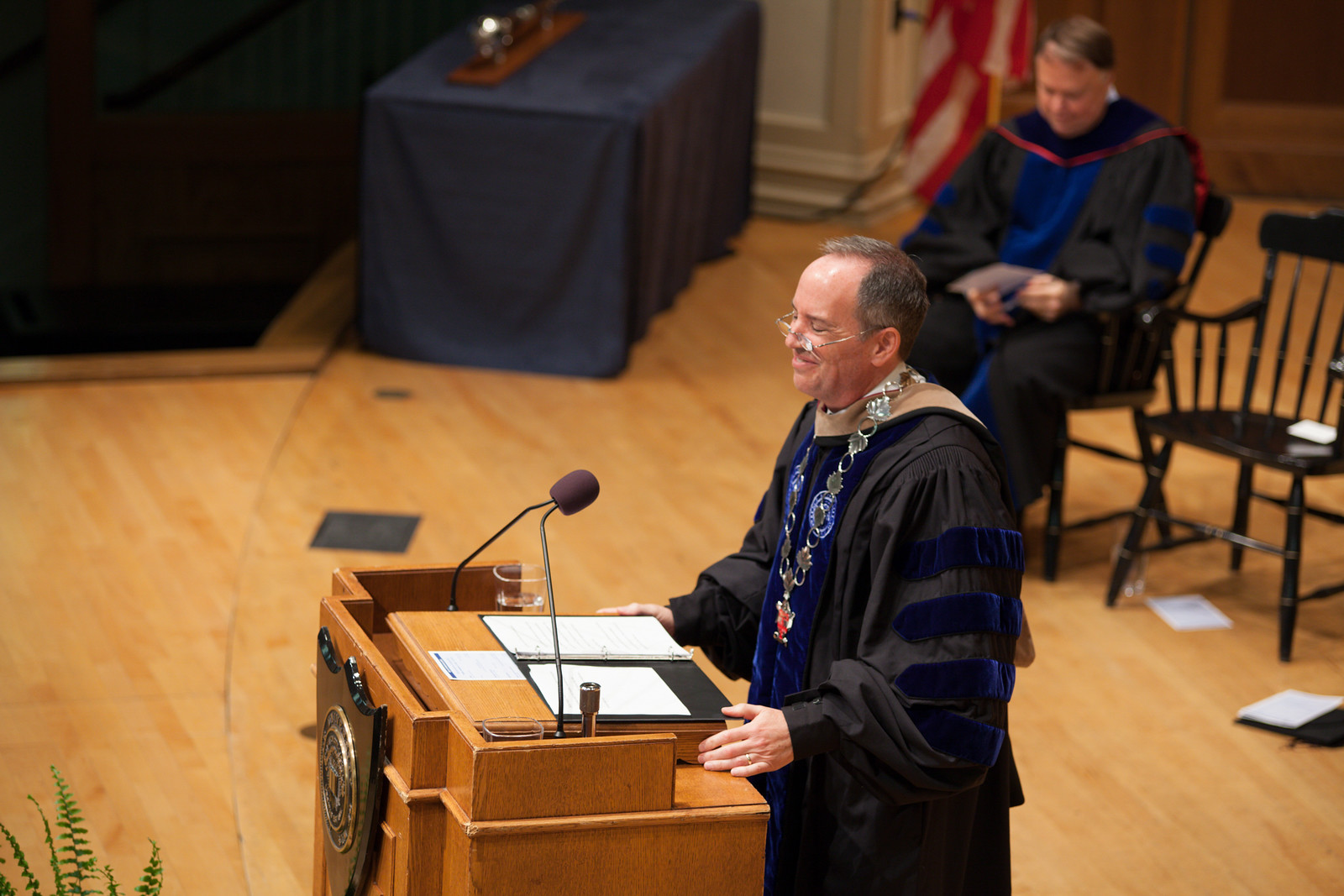 In the Lawrence Memorial Chapel on Thursday, Sept. 17, the annual Matriculation Convocation was held from 11:10 a.m. to 12:20 p.m. The 16th president of Lawrence University, Mark Burstein, was the featured speaker at the event. His speech was titled “For Mature Audiences Only: A Liberal Arts Education.”

President Burstein’s speech centered on the issue of political correctness and self-censorship in education facilities. The speech integrated articles on recent events, thoughts from prominent figures, and references to topics on campus. He voiced concerns about censorship in educational environments restricting the ability to engage with uncomfortable topics and understand such topics through conversation. He also stressed the need to balance encouragement in discussion with a welcoming environment.

Senior Cora Williams said, “My initial thoughts [on the speech] are that the subject…was very similar to what he [Burstein] talked about last year about letting opposing viewpoints in, but then the further he went on, I realized that he was elaborating on what he talked about last year…it seems to be a common theme that he really wants us to work on, specifically not only letting in opposing viewpoints, but making sure that sometimes if you have the opposing viewpoint to feel comfortable being able to say it and not feel like you are held back.”

The theme of encouraging discussion was a key point in the President’s speech. Junior Sierra Parker remarked, “We shouldn’t pretend that we are all of one mindset.” Freshman Celine Stichert spoke about how the speech made her more aware of the variety of experiences on campus. Stichert remarked, “In CORE we were talking about identity and the first thing they had us do was go around and say if we prefer to be called he, she or they, and that’s something I would never have thought about.”

President Burstein also referenced “Fun Home,” a book that is part of the Freshman Studies curriculum, as an example of a piece of literature that is not allowed to be discussed on all campuses. Stichert noted that the speech highlighted roadblocks to learning in reference to banned books. Stichert said, “I kind of hope that we discuss some of what he was saying when we get to [Fun Home].”

Junior Elisabeth Burmeister said, “When I read that ‘Fun Home’ wasn’t allowed in different colleges, it reminded me of ‘Fahrenheit 451’…that’s not the world we live in. It’s much more open and free, and books shouldn’t be banned from classes just because it offends somebody.”

The importance of dialog in a classroom extended beyond classroom literature. Williams said, “I do think that it would be interesting to talk about the trigger warnings in the classroom setting…the thought of professors having to really watch what they say and be careful not to offend someone in their class. I think that’s a really interesting concept that I think would be a good discussion to have in classrooms.”

President Burstein’s speech encouraged students to continue the conversation on self-censorship and micro-aggressions. Williams said, “I think that the whole micro-aggression discussion is something that, it is coming up in conversation.” The speech also raised the question of separating the idea of uncomfortable dialog from a hostile environment. Sophomore Ethan Gniot remarked that “Controversy is different than malice…if someone has a dissenting view that does not match up with yours that’s an opportunity for you to learn how to defend your point of view if you can’t then reevaluate why you can’t.”

As the academic year begins, the Matriculation Convocation set the stage for further discussion throughout the year. Parker said, “I feel like there might be some strong reactions to this convocation in particular and I can see them maybe holding a forum.” Williams said, “I hope that it’s something that will be a bigger picture sort of thing…I don’t expect to see things immediately, but I was really glad that everyone that I talked with who went seemed to really internalize what he was saying and were excited about what it meant for our campus.”