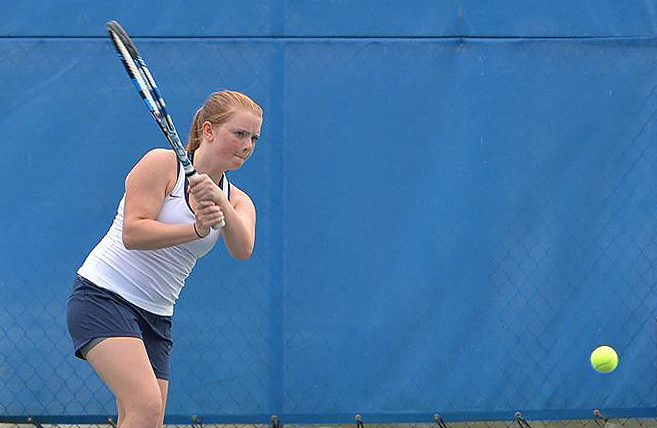 Annie Harincar, of the women’s tennis team, recently finished her first season as a Lawrence student-athlete. Harnicar concluded her season along with Lawrence’s top six singles players in Madison for the Midwest Conference  (MWC) Championships on Oct. 17 and 18.  In the final weeks of the season, Harincar was on a hot streak to help state her case as a contender.  Competing against Monmouth, Harincar staged a comeback victory to be the tiebreaker in a 4-4 match between the Vikings and the Scots.  Harincar would move on to win three straight sets to end the regular season, also winning the preliminary match of the Midwest Conference Championships. She did not advance past the quarterfinal match.

Where are you from?  What drew you to Lawrence?

I’m from Minneapolis, Minnesota.  I was looking for a school that was small, with a great campus and sense of community.  Lawrence — more than any other school — had that feel when I got here.  Everybody is focused and friendly. It just has that communal feel.

What was the feeling like when you stepped onto the court during the MWC Championships?

It reminded me a lot of high school, actually.  In Minneapolis, we got to play at the University of Minnesota tennis center.  That was our big end-of-year tournament.  So being in a space like that, it was exciting, especially playing singles, being in such a big place, with so many people watching you, it’s a big psychological task, and I really like it.

Going into the tournaments, it must be really nerve-wracking.  How did you handle the pressure?

I guess I don’t get terribly nervous.  It’s really easy to get frustrated at yourself if you’re nervous. So finding a way to channel out that frustration to achieve your goal is important.

How do you plan to maintain momentum for next year?

As a team, we practice a lot in the off-season.  There [are] also a lot of great programs back home that I will utilize next summer to prepare.  It’s less of a chore to get yourself ready to play when it’s like a stress reliever.

What’s one thing you’re looking forward to for the rest of this year as a Lawrence student?

I’m really excited, now that I have more time, to explore more clubs and opportunities on campus that I didn’t really have time for during the season.  I’d like to check out The Lawrentian, SLUG, ORC and also to just focus on my studies.

I’m surprised at how similar it feels, the camaraderie of the team, it’s very similar.  In terms of competing, it’s much more serious, and I like it.  Our coach’s expectations are very high, and he pushes us very hard, which is something I didn’t have in high school, so I think I’m improving a lot as a player.

It’s not just tennis, it’s everything.  I have a physics class with Lindsay Holsen, a bunch of girls get together to study, we hang out on weekends together and we go to meals together.  It’s an all-around support, you can just text any one of them for help.  It’s like a great family.

It looked like you had a chance to bring home some trophies this year.  What does the future hold for the tennis team?

I think we’re going places.  We’re a very young team, and we don’t currently have any seniors to lose.  All four freshmen that came in this year were in that Midwest Conference Championship lineup, so we have a lot of room to grow.  If we have that standard to expect in years to come, we’re going places.

By Brady Busha Annie Harincar, of the women’s tennis team, recently finished her first season as a Lawrence student-athlete. Harnicar concluded her season along with Lawrence’s top six singles players in Madison for the Midwest Conference  (MWC) Championships on Oct. 17 and 18.  In the final weeks of the season, Harincar was on a hot…