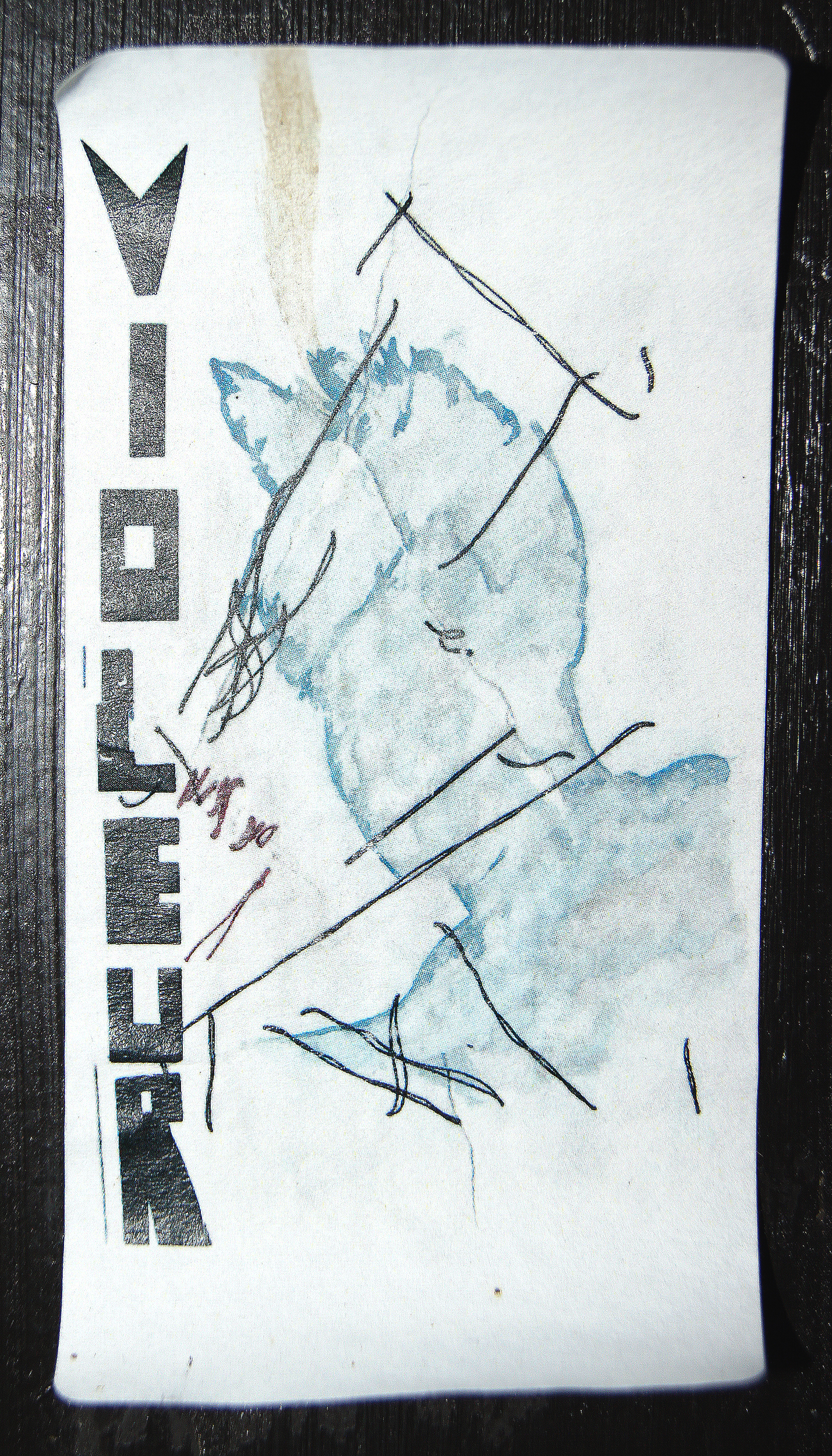 Everyday you see posters advertising the latest campus activity, the next big party or perhaps a student recital. With so many of these announcements around campus you may be inclined to gloss over them or ignore them completely.

However, the latest sticker showing up on campus posting areas is capturing more attention. The sticker reads “Violeur”. Unlike most postings around campus this sticker is not aimed to please but is aimed to make students think. In order to come to a deeper understanding I was able to sit down with the sticker’s artist, who at this time wishes to remain anonymous.

Editor’s Note: This interview is about rape and sexual assault, and some of the content may be triggering.

What is the title of your piece?

It is called “Violeur”, which is a word in French which serves as a trigger warning and also helps with my concept which I think is fitting for the subject matter for this piece.

How did you choose the medium of this project?

This piece was initially a painting. Then I thought about it and was like, why don’t I make this a sticker? I had to jump through a lot of hoops to get it on campus but I think that in the long run it was fine. I had to go get four signatures. I wrote a statement as to why I was doing this; this is my reaction my response to a perpetrator returning to campus and all of these people signed. I tried to be as transparent as I could be because I want people to know what this was about, without sugar coating it. For survivors, I was thinking about survivors, and other people who might be triggered by having the word rapist rather than violeur.

When did you start thinking about this project?

I was off campus when all of this controversy about someone returning to campus arose, which ultimately led to the changes to the sexual misconduct policy. Amidst all these changes, I began to think about my role as a student, as a woman and as a survivor actually being on campus and the paralyzing fear I feel knowing perpetrators are here. So, I really wanted to do something that was very confrontational and very unapologetic because I think of myself as a very blunt person.

I really wanted to make this a very confrontational piece where people are forced to think about it every single day because survivors don’t have that option, it is something that is carried with us as we live our day-to-day lives.

Did you have any influences on this project?

Not at first, I didn’t look up other artists. I did feel like it pretty much had a “wanted sign” kind of feel to it, which I really liked and was kind of going for with the bold letters and the very mysterious outline of the face.

Could you describe the process of creating your artwork?

It was a very therapeutic process. I really wanted this to be my own healing. So, I painted this face and then I wrote the words then blocked them out with tape. Then I just started ripping it, completely ripping everything apart. To me it symbolizes a part of me that has been taken away and so that was my action of ‘this was what you’ve taken away from me’. But then I re-pieced it together with string, which symbolizes the very thin pieces of what is remaining because I think people believe sexual violence is only a one-time impact that is never revisited. Which is false. Survivors have a long time healing process.

What are you hoping others take away from seeing this every single day?

I hope that people see it and say “wow.” There are three main reason I want people to see this: I want survivors to see it and say ‘wow this could be my perpetrator and they are being called out’, potential perpetrators who have not been outed to see it and think ‘wow someone knows who I am’, and for the person who came back it shows I know who you are and you’re not welcome. Which I think is great because it has different targeted audiences, while also targeting those who don’t know what this is all about, who then can look it up and come up with their own views of it. Yet, the words are so bold that it cannot be anything else other than what it really is. The meanings are pretty closed, but I think different people based on their backgrounds take away something completely different.

Do you think this meaning will be different for students or outside community members or even faculty?

I think for students it should show that someone is actually going to address this issue, which might be scary or exciting for people. Some people might think that’s right, some people might think that’s wrong but I did it in a way which resonated with me and kept my artistic integrity intact. People are going to make their own assumptions about whom this person is or the various people they are because it is so ambiguous. For faculty it is says ‘this could be anyone in my class’. Showing them it is an issue on campus they are not immune to, because we tend to think of our campus as this safe bubble where nothing bad ever happens, which is very unrealistic. By doing something like this it challenges people’s idea about Lawrence and discourse surrounding sexual violence. Making people reassess what they think about the school, about rape culture and how our community responds and feeds into that.

How do you think your artwork feeds into dialogue on campus?

I wanted it to start a dialogue about rapists and the longtime trauma that their actions have had on different students but also the stain they leave on this community. At the end of the day, I want this community to start, really start, a dialogue and ultimately better support survivors. In addition, I have heard numerous times that various perpetrators who come back go through intensive screening to make sure they are no longer a threat. I don’t buy that. As a survivor, I think of this as a huge slap in the face to let a perpetrator come back to campus. Safety is compromised.

Do you think that it has sparked discussion?

I have seen people say ‘what is this?’ and actually take the stickers down because they find them offensive. It is really interesting because I think our campus is split. There are people who don’t care because they think it doesn’t affect them – but it does- and there are people who think this is really good because we don’t want people like that here. It makes people reassess what is told to us and open up discussion surrounding safety overall.

Do you see this artwork you have done now continuing into the future?

I think so. This is something that is very personal to me and I am just learning how to put my activism into my art. Art has a way of reaching a variety of people and can be effective at making commentary on issues.

Do you have anything else you would like to add?

I think what I want to get out of this is that the pain is very real, that there are many people on this campus who have been the victims of these kind of acts. As a community we can’t be complacent because these are people’s lives at the end of the day. Are we OK with that? Are we OK with letting people come back after such violent acts?

To survivors: You are valid, you are powerful, and you are strong!

By Laura leppink Everyday you see posters advertising the latest campus activity, the next big party or perhaps a student recital. With so many of these announcements around campus you may be inclined to gloss over them or ignore them completely. However, the latest sticker showing up on campus posting areas is capturing more attention.…