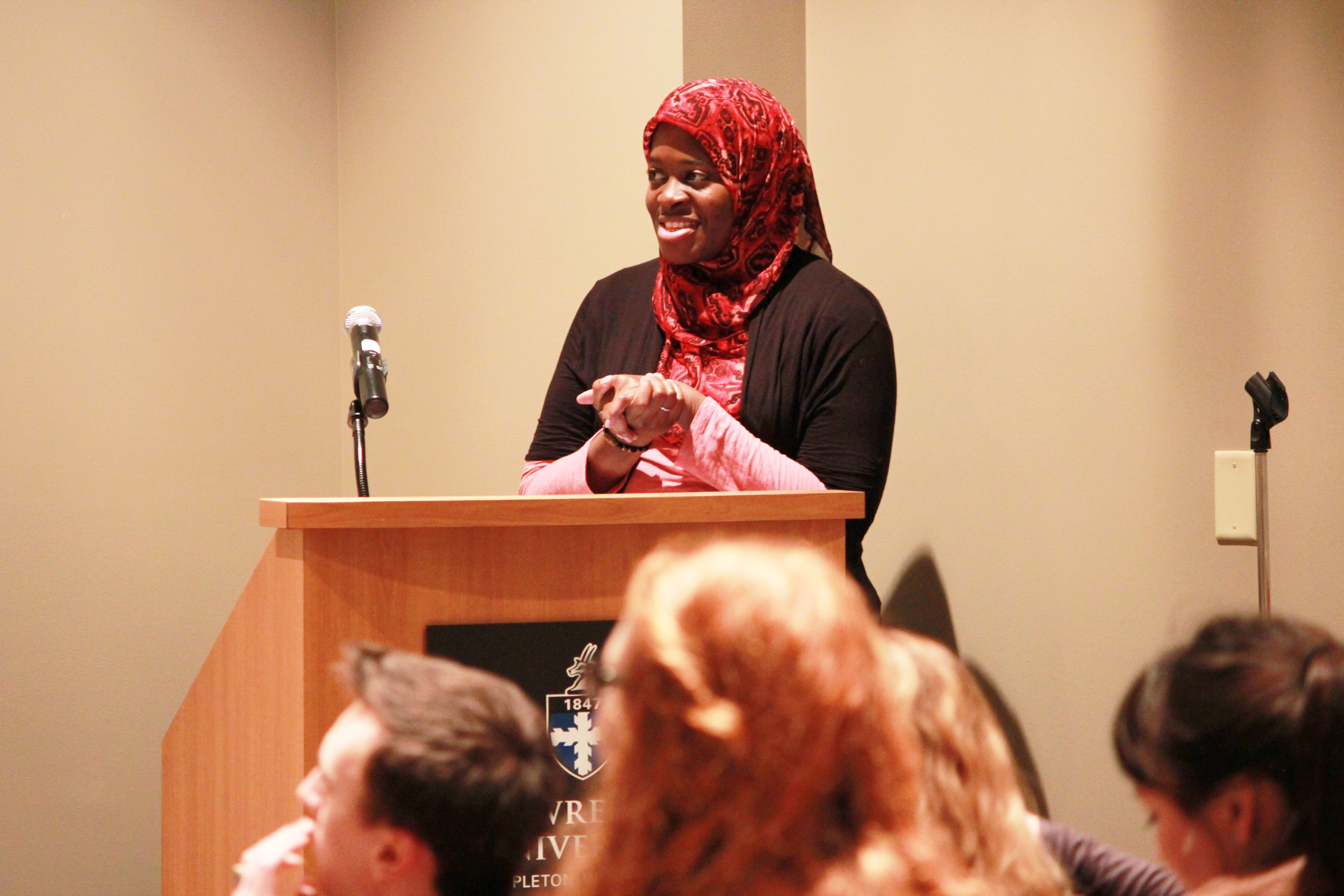 On the evening of Saturday, Nov. 7, Gay, Lesbian Or Whatever (GLOW) ended their “Week of Awareness” event with a talk in the Warch Campus Center cinema. The speaker was Ify Okoye, a writer, nurse and activist who identifies as both queer and Muslim. Explaining why Okoye was chosen to speak, junior and GLOW president Nebal Maysaud said “[GLOW] wanted to end the week by bringing awareness to a topic that very few people know about—the intersection of faith and LGBTQ+ identities.” Last year the club hosted a trans pastor, and Maysaud wanted to stay on a similar theme but “branch away from Christianity, which we hear a lot about, and focus on other religions.” He added that as this is the first year the club has hosted a Week of Awareness, they decided that they needed a large event that would “tie to a lot of what we need to do on campus.”

Okoye spoke to a small gathering of five students, but often had the cinema filled with laughter. She touched on her mostly secular upbringing and the early realization that she was a lesbian and then explained how she came to Islam after a move from her hometown in New York left her searching for community.

The first mosque that Okoye frequented was very conservative, and she talked about her struggles there. For a long while, she believed that being queer and Muslim were incompatible, and was even engaged twice to men. When she finally did enter into relationships with women, Okoye said that “a lack of positive Muslim role models made queer relationships hard to navigate.”

She was also troubled by the requirement that women pray in separate, and often inferior, spaces from men. This drove her to lead “pray-in” protests, where she and female allies would pray in the men’s spaces. Several times they were verbally harassed, pushed and shoved, or threatened with arrest, but in the end several mosque leaders were willing to meet with them and respond to their concerns.

Okoye ended her speech by talking about contributing to an anthology titled “The Secret Love Lives of Muslim Women,” and how doing so prompted her to come out and seek more accepting Muslim communities. “It was faith-affirming to read the interpretations coming from more progressive voices, and finding that these are also people who take their faith very seriously. They read the same text, and come to different conclusions […] finding those voices has been very instrumental in me feeling comfortable in my Islam,” Okoye said. Now, she says “If I read [an interpretation of the Quran] that doesn’t work for me, I don’t accept it […] and I think that’s valid.”

During the question and answer section after Okoye’s talk, one student asked for advice in making GLOW an inclusive space. Okoye advocated for setting safe space ground rules, and advised the group to be welcoming but firm with those who violate those rules.

Reflecting on the event and Week of Awareness in general, Maysaud believes that despite the low attendance, “the learning experience was valuable.”

By Nicole Mitchell On the evening of Saturday, Nov. 7, Gay, Lesbian Or Whatever (GLOW) ended their “Week of Awareness” event with a talk in the Warch Campus Center cinema. The speaker was Ify Okoye, a writer, nurse and activist who identifies as both queer and Muslim. Explaining why Okoye was chosen to speak, junior…