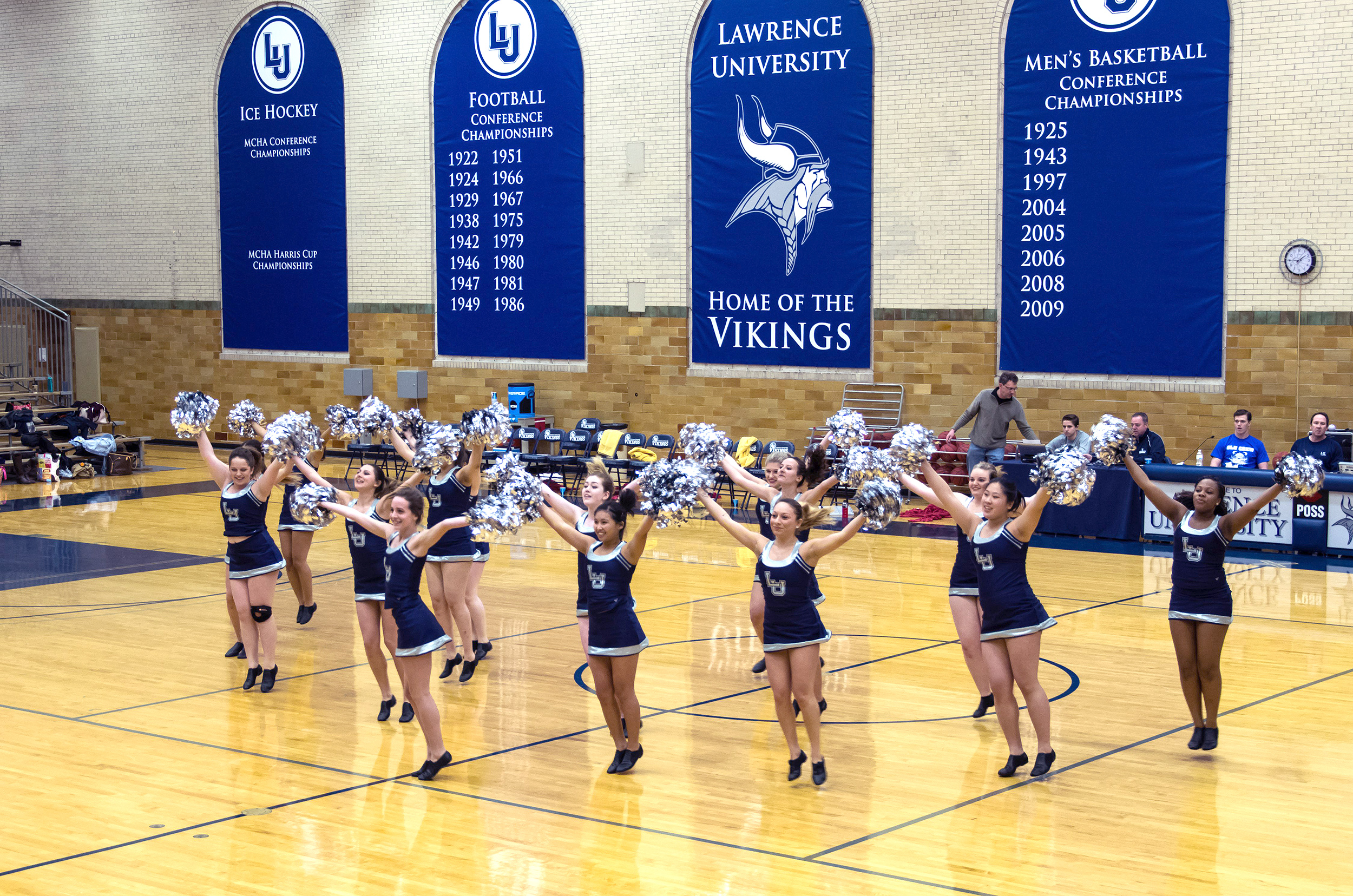 The Lawrence University Dance Team may have been under your radar when it arrived on campus last year, but by now, its impact is impossible to ignore. Co-founded and captained by juniors Natalie Ortega-Wells and Jori Warwick, and sophomore Becca Tapia, the team has become a significant part of athletic life at Lawrence and in the greater Appleton community.

The three wasted no time in getting the club up and running in 2014—by the first week of Fall Term, it had been approved by the Lawrence University Community Council (LUCC) Steering Committee—and put in a great amount of work to make the team’s performances an expected part of athletic events.

“We want people to know dance team is performing at halftime at football and basketball games. We don’t want it to be a surprise. That’s what we’re trying to establish,” Tapia said. “We want to bring entertainment and spirit to sporting events,” she said.

So far, that underlying goal is being accomplished. Coinciding perfectly with the newly-renovated Banta Bowl this year, the dance team started performing at halftime during the football games, which was not something the team was able to do last year.

So far, the response has been incredibly positive. “When we perform, the girls on the team invite their friends and family to come watch, and it brings more support for the people playing,” Warwick pointed out. “Parents have come up to us afterward to thank us for performing,” she said.

In addition to increasing the amount of school spirit, the team has been reaching out to the community for other outlets for sharing their love of dance. This year, the team is forming a weekly clinic for kids in the area called “I Am: Appleton Moves” on Saturdays starting Jan. 30. “Members of the dance team are going to split up and work with a group of kids to choreograph a piece, and at the end, we’re going to have a performance for their parents,” Tapia explained. The team is also volunteering at the Boys and Girls Club on Martin Luther King Jr. Day to teach dance to kids there as well.

“As a team, we’ve talked about doing other things, like competitions—but we’ve been finding other outlets to reach out,” Tapia said.

Some activities that the team was able to do last year were to partner with GlobeMed for Dance-A-Thon and bring a choreographer to campus for a master class open to everyone.

Anyone on campus really can involved. Ortega-Wells said that the dance background of the team members is varied. “We have some people who have been dancing their whole lives, and some people who never danced before coming to college,” she said. Even she and her two co-captains have varying levels of dance background. Ortega-Wells danced with her high school dance team and in a company at home focusing on aerial dance, while Warwick started ballet at age two and competitive dance in second grade. Tapia started with hip-hop at age six before joining two different dance companies in high school.

“I had never done poms or anything like that [before coming here],” Tapia said. “I’m from New York City where there aren’t really any football fields, so it’s just not a thing,” she said. Warwick also said she was not really involved with poms before starting the dance team.

However, the varying dance background and musical interest is what makes the formation of the dance team so interesting. “We’ve had a lot of positive feedback from girls on the team also, that dance team has become a good outlet for them,” Warwick said. “We’ve incorporated all different types of dance and music for everyone to be able to express themselves,” she said.

If you are not a dancer yourself, there are still many opportunities to see the dance team perform. The team performs at Lawrence’s basketball games on Saturdays, and are currently choreographing a performance for Jan. 23 in which each girl has a male partner from one of the other athletic teams on campus—who may, or most likely may not, have dance ability themselves. Also stay tuned for the spring dance show in May, which the team will be hosting with Melee in Stansbury Theatre.

By Margaret Koss The Lawrence University Dance Team may have been under your radar when it arrived on campus last year, but by now, its impact is impossible to ignore. Co-founded and captained by juniors Natalie Ortega-Wells and Jori Warwick, and sophomore Becca Tapia, the team has become a significant part of athletic life at…