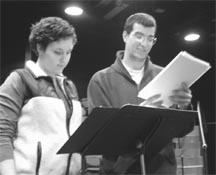 Meryl McNally (left) and Al Reiser (right) rehearse radioplays by &The Bard of the Airwaves& Norman Corwin.
Will Doreza

Monday, April 25, Paul Rusesabagina, a Rwandan humanitarian with whose work many are familiar through the 2004 movie “Hotel Rwanda,” visited Lawrence to give a speech titled “Hotel Rwanda: A Lesson Yet to be Learned.” The event was so well- attended that Stansbury Theatre was unable to accommodate all of the people who wished to hear Rusesabagina speak.

Rusesabagina, a native Rwandan, has been internationally recognized for saving 1,268 lives during the 1994 Rwandan genocide by using his influence and connections as the temporary manager of the Mille Collines hotel to provide shelter to displaced Rwandans.

Rusesabagina has been recognized through awards such as the Presidential Medal of Freedom and many honorary degrees from academic institutions. He currently resides in Belgium with his family and continues to travel and work for social justice worldwide.

The Rwandan genocide, led by the Hutu Interahamwe militia, began April 6, 1994 and was responsible for the deaths of over 800,000 Tutsi and Hutu Rwandans.

In his speech, Rusesabagina recounted the turbulent history of Rwanda and the struggle between the Hutu and Tutsi groups, which he claimed to be culturally indistinguishable, set apart only by a history of privilege and power.

Rusesabagina continued to describe the events of the genocide he witnessed, such as his son discovering his slaughtered neighbors, how he saved his orphaned nieces and the constant threat of the Interahamwe militia that jeopardized the safety of his hotel.

“We saw husbands killing wives, wives killing husbands, because of who they were,” said Rusesabagina in his speech. “We saw parents killing their own children.”

“I think some people got a more in-depth story of what actually happened,” said Ornella Hills, who was charged with coordinating Rusesabagina’s visit. “It shows [Lawrence] what Africa is like, it gives that perspective. People need to be educated a lot more about these issues.”

Rusesabagina closed his speech with a call for awareness of social injustice. He described the genocide as “A Lesson Yet to be Learned,” a past event framed by years of war and social injustice. “Words are the best — and worst —weapon in a human being’s arsenal,” said Rusesabagina.

Following his speech, Rusesabagina took questions from the audience. In addition, he was available to sign copies of his autobiography, “An Ordinary Man.”

Timeka Toussaint, chair of the Committee on Diversity Affairs, said of Rusesabagina’s speech, “War is only one aspect of what needs to be done in the world. There are so many other things that lead up to war, and many things that can happen after wars.”

The idea to bring Rusesabagina to campus to speak was originally an idea from the Black Organization of Students. However, due to the high cost of bringing in such an esteemed guest, it quickly became a collaborative effort between several groups on campus, including BOS, CODA, Students Working Against Hunger and Poverty, Student Organization for University Programming, many academic departments, Inter-Fraternity Council and Panhellenic Council.

“I was very driven by the story in general, that he was able to do all of that mainly from courage,” said Hills. “He couldn’t have done that without collaboration or help, so I think that that shows that that applies to [Lawrence’s collaborative values].”

“Everyone knows about ‘Hotel Rwanda’ and what happened in terms of the genocide, but no one takes the time to fully understand the kind of process and the ideology that’s behind that,” said Toussaint. “I think that it’s not only a social injustice issue…it’s an issue that everyone can learn from. It’s not just dealing with government and politics, but basic human nature.”

Toussaint commented about the relevance of Rusesabagina’s visit to CODA’s mission, “The Respect the Other Campaign is all about moving beyond tolerance into learning how to respect other people for what they believe and who they are.”

Referring to Lawrence as a community that believes in activism and social justice, Toussaint added, “He stands for what we believe in as a campus.”