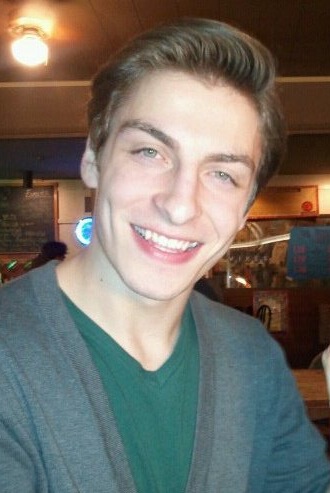 Brian Acker’s entry into the worlds of music and theater was unique. After dedicating himself to wrestling for six years, he knew it was time for a change.

“It was my sophomore year of high school that I joined the show choir, concert choir, chamber singers and orchestra, and I absolutely fell in love with music and theater,” Acker recalled.

He continued, “I realized that the dissatisfaction that I was getting from wrestling practice and the negative environment there was completely solved, and I found my true calling in the arts. And very quickly, to my father’s disappointment, I dropped wrestling and focused all of my time on music and theater.”

Acker’s hard work in music and theater brought him to Lawrence, where he is pursuing a bachelor of music degree in choral and general music education with a minor in theater arts.

This weekend, Acker will be starring in “The 25th Annual Putnam County Spelling Bee,” a one-act musical comedy that centers on a fictional spelling bee.

Acker is playing the role of Mr. Panch, a vice principal who doesn’t necessarily get along with kids but pronounces the words to the spellers at the bee. The show includes audience participation and improvisation, which Acker is looking forward to.

“As the word pronouncer, I am allowed to pick whatever words I would like the audience volunteers to spell,” he said. “Depending on their response, the course of the musical is changed, and basically I have to wing what happens after that.”

Acker added, “So the most enjoyable part of this production is getting to poke fun, and making the audience volunteers feel as awkward as possible — but in a funny way.”

The show is produced entirely by students and runs Friday night at 8 p.m. and Saturday at 3 p.m. and 8 p.m. in Cloak Theater. Admission is free.

Earlier this year, Acker appeared as Jack in “Into the Woods,” and later this term will play Ferdinand in the theater department’s mainstage play “The Tempest.”

Acker, who has been involved in many productions at Lawrence, said that his role as Pangloss in last year’s opera production “Candide” is most memorable to him.

“I didn’t audition for the role and I wasn’t expecting to get a lead character, but when I was given the role I decided that it was the voice faculty giving me a chance and I had to step up,” he said. “So after spending countless hours working outside of rehearsal, I guess the end result of my character in my show was a success.”

Acker studies voice and piano at Lawrence and sings in Concert Choir. Back home in Middleton, Wis., he plays guitar and sings in his family band, The Acker Four. Playing the violin is another one of Acker’s musical interests.

Acker hopes to eventually be a choir director at the high school or collegiate level. But first, he plans to pursue a career in acting. Be sure to get to Cloak Theatre this weekend to see Acker in “The 25th Annual Putnam County Spelling Bee.”

Artist Spotlight seeks to highlight the achievements of aspiring artists of all kinds. If you would like to be featured or suggest someone to be featured in an upcoming issue, please e-mail us at lawrentian@lawrence.edu.